Beautiful Rooms: Inspiration for your own places and spaces

Today’s post is brought to you from the sick bed as I appear to have succumbed to the so-called supercold. Or perhaps it’s just that I haven’t had a cold for three years so have forgotten how wretched they are. Or perhaps it’s because the bedroom is currently the nicest room in the house as it’s so nearly completed (we can’t count the 21yo’s, which is fully done, as he’s in it with the door firmly closed) so I’m finding excuses to stay in here. So what I have found for you today? 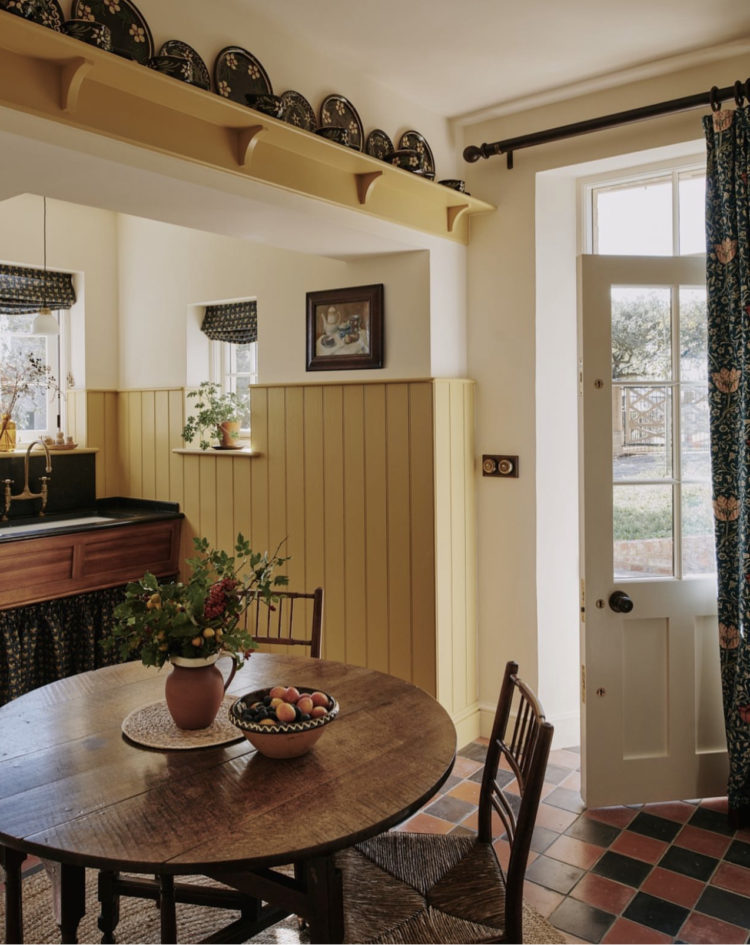 Let’s start with the sunshine – sadly far away this January. This “housekeeper’s kitchen” by one of my favourite companies, Artichoke Ltd, is a shade of yellow just dirty enough to not count as yellow. So; points to take away and consider if you feel inspired by this room. Firstly the panelling runs tall and incorporates that little window. This makes the ceiling feeling higher and also stops the room being disjointed. If you are going add panelling then deciding the height is one of the key issues. It might feel tempted to stop at worktop height but that’s probably lower than half way and can make the room feel unbalanced.

It would also create more dividing lines with the windows which don’t tend to come as low down as the counter. Dividing the wall roughly two thirds for panelling with the top third painted to match the ceiling will add colour and texture and create a more streamlined finish. That way the windows – which are half in each bring the two parts of the room together.

The black and white blinds add a bit of drama and stop the room feeling too clean and spring (fine if that’s your thing it’s not mine – in which case you might want to add green window dressings for example) and natural dark wood is layered in as well. I’ve said for some years I’m a fan of dark wood rather than that pale modern oak which has been ubiqutious for the last few years. Another splash of yellow in the form of this kitchen island. Now while I’m not sure it’s particularly useful to talk about trends as my mission has always been to help you to find your own likes and dislikes regardless of fashion, it’s also true that it can be useful, and interesting, to be aware of the conversations that are going on i the world of interiors and this is one of them. Kitchen islands seem to be undergoing something of a backlash at the moment and rather than being a sought after fashion item it has become fashionable to slate them and decry their usefulness.

I was very fond of mine when I had it and I may yet add one to the kitchen in the house in Italy (if it all goes ahead) so I’m not going to get drawn into that particular argument – you do you as the saying goes – but I will say that if you are planning on when then it’s worth considering the design. Mine was solid and while that afforded a lot of storage it did rather look like a giant tanker had parked in the middle of the room. If you can leave a side open – like the one above – you still have storage but the whole piece is less dominant. Likewise the fashion is moving towards the butler’s table which is like a table with super deep drawers so you can see the floor underneath but there is still storage. No good for ovens or sinks though which is what many of us choose to house in our islands. Staying in the kitchen and sharing a little bit of inspiration for the new house. This week is mostly about the bookshelves (as I said on Friday) and choosing the colour for them proved harder than I thought. We had chocolate brown in the last house and I didn’t want to repeat. We also have dark wooden floors newly installed here (Hatters from Broadleaf Timber) so I didn’t want a brown that would clash with that. Then I found this new colour from Paint and Paper Library which is called Scarlet N Rust – a sort of mix of red and rust brown and it’s perfect. The walls of this room will also be a very pale pink although not as dark as pictured here which is PPL Mink.

The point to note here is that the window and shelf are all painted to match the wall which means no distractions from the things on the shelf – and if you have open shelves then I’m going to assume you are filling them with beautiful things – or from the view out of the window. Yes you could have painted both of them dark to match the cupboards but the overall effect would have been more disjointed and bitty. Far better to leave it like this and add a disrupter colour in the form of a yellow fruit bowl or cobalt blue vase on the shelf. Another image that inspired the current house renovation or rather, the image that summed up what I had been trying to tell the joiner for months until last week when we decided it would block the space too much. These are old shutters in the designer Charlotte Boundy’s house. I have spent months looking for something similar to divide the front half of the sitting room from the back before conceding that the size I needed would mean they would have to be made to measure. I had just found the person to do it (expensive) when we decided that because of the architecture of the room – the doorway is angled – it would make the entrance feel pinched so we have decided against it. I have, instead, had another idea. One which I will be putting to the joiner as you read this post. I’m not sure he’s going to like it but it’s cheaper and easier than 3m wide folding shutters. I will, of course, keep you posted. Finally, while we’re on the subject of inspiration a couple of images from last summer’s visit to the Wow House at Chelsea which many of you found a terrifying onslaught of colour and pattern when I wrote about it. It was, needed full on, but it was also designed to show you a lot of product at once. I have been marinating on these two images and while I’m not having a four poster bed or any canopies, the thing I took away from this room by the designer Joanne Plant was the sisal flooring, which will be installed in our bedroom next week. I like the rather utilitarian flooring contrasting with the layers of fabric and colour and, if you have been following, you will know that I have also added wallpaper to our bedroom.

And, this bedroom, by Morris and Co, inspired me to add wallpaper to the bathroom which starts next week. Not this wallpaper, sadly this design – Bamboo – only comes in fabric, but a different William Morris design. This house, unlike the last one which was a tall London town house, is more of a terrace worker’s cottage and the interior design will reflect that.

I hope these rooms and musings give you some ideas and inspiration for your own. How to Add Character to a boxy bland room

The Househunter: Palatial in Peckham