It probably hasn’t escaped your notice that houseplants are having a moment. This may be a short-lived trend or it may turn out to be a longer term look, but either way it’s true to say that rooms are starting to look as if there is something missing when there is no foliage. Now there was a bit of an interior designers hissy fit at the end of last year when Pantone named its colour of the year as Greenery, which turned out to be a rather yellowy version – like, er green leaves basically. But the company bases its decision more on a feeling or reflection of world mood (in as far as that is possible) rather than actually suggesting we stick it all over the walls. Put like that this shade becomes much more acceptable if you view it as actual greenery rather than paint. Talking of colour of the year, Dulux named a soft blue as its choice but within the palettte was a lovely soft green called wild cactus so they are broadly on the same page. When it comes to green paint, the mood is much more towards the soft olives and foresty greens which are popping up everywhere now. You can read about how Dulux comes up with its choices here but for now we talking greenery as in plants. If you were here yesterday you will also recall that my guest blogger, Ciara Elliott, editor of EKBB magazine, also mentioned going green as one of her top five styling tips for 2017.

But what if you’re a plant murderer? If you have a hand that’s missing the green finger? What if you can’t be bothered to water them? Or, as is more often the case, you tend to kill with kindness? Well in that case the faux is your friend. Yes faking it is now totally acceptable. However, you have to hunt about – and spend some money to get the good ones. I’m afraid, as is so often the case, that you get what you pay for. 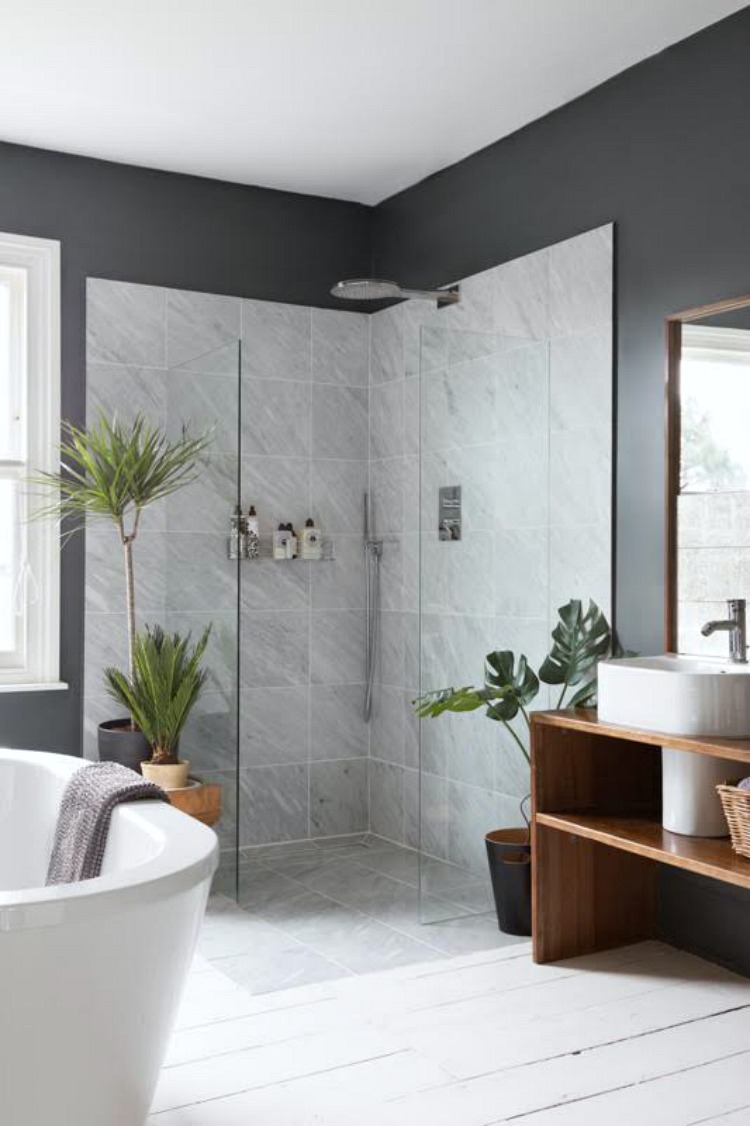 So here are some of the good ones as recommended by me and some of my fellow bloggers who have invested. First up is this Monstera, or Cheese Plant from Rose & Grey. Now I have this one and I think you know me well enough to know by now that if it wasn’t any good I wouldn’t be writing this post. Yes, they sent it to me but, believe me, I get sent quite a lot of stuff and some of it goes straight back out to the charity shop or recycling – sometimes before it’s fully out of the wrapping. I have had this one for a couple of months and it regularly fools people who come to visit. I would have paid for this. Here you can see it in The Mad Bathroom next to two real plants – the smaller of which is currently dying a long slow death  – I can’t decide if its due to under or overwatering but its leaves are wilting by the day which is all the more reason for faking it. This is another faux cheese, this time by Blooming Artificial which costs an easier £56.99. Carole King, of Dear Designer whose bedroom this is, says she has no problem recommending this one. But she does have a top tip, which I would definitely echo.

“You must repot them. All the pots – no matter how much you pay – are always too small and lightweight,” she says. Jen Stanbrook, of Love Chic Living, also praises these plants and points out that Blooming Artificial does recommend that you repot – and then handily – sells the equipment that you will need. Yes, I know but it’s a selling world we live in. This seems to be the key point though – repot or you’ll give the game away. faux fern from cox and cox

There have also been good reports from Cox and Cox whose fern is seen above and which costs £50. Now those would appear to be the top three places but they’re not failsafe. The issue is the type of plant you are trying to fake. The tropical plants which have large and quite plasticky leaves in the first place, are easier to copy. Abigail Ahern’s Carolina Banana plant is a case in point. It’s huge and I’ve seen it in store and it looks great. But at £685 it really is an investment.

Succulents and cacti are also easier to fake for the same reason but if you prefer more delicate plants such as ferns you might want to either look at them in real life first, or be prepared to shop around until you find one that works for you and send back the ones that don’t work.

As a final tip I have done some digging (in my fake earth) and found that the monstera from Rose and Grey is made by a Danish designer called Lene Bjerre. Now I haven’t seen any of her other plants, but if that one is so good it stands to reason that the others are worth a look as well. There are UK sites selling them but they don’t always give her name. I have linked to her range so you can do your own compare and contrast when you are looking at other places. I would also suggest that you mix and match real and faux in a cluster which will help hide the fake one. It’s the wardrobe principle – if you are wearing Prada shoes and carrying a designer handbag no-one will think your jeans are from Sainsburys. Finally, don’t stick a fake plant in the middle of the coffee table where it will be in prime view. Keep it as an accent piece – on a shelf or livening up a corner. Somewhere where it will look good but won’t be centre stage. That way you are more likely to fool more of the people more of the time. But if fake really isn’t your thing then fiddle leaf figs are beautiful, expensive, moody and absolutely the plant of the decade – see mine above. The fashion house Celine used them in its stores and there has been a run on them. If you can even get one it will cost a small fortune, but they are fabulous. I have had mine for nearly a year now and it’s going strong. Below is the magnificent specimen belonging to Kimberly Duran, of Swoonworthy, who explains how she looks after hers and where she bought it from. One final point – everyone’s opinion on what looks real will differ. My mother wouldn’t be taken in by any of these and they do vary from plant to plant. This is intended as a guide to a good place to start looking. I have also heard good things about some of the Ikea ones but you will need to see what you think about them in your own house. On the other hand, if you find any good ones then let us know in the comments below because, in my case, investing in a faux looks like it may be cheaper than to keep on replacing all the real ones.

Five Objects Of Design To Update Your Home This Spring