Blinds, Curtains and Voiles – all about Window Treatments

There’s no getting around the fact that dressing windows is an expensive business. So on this week’s podcast Sophie and I dived in to sort out your Romans from your Londons and your rollers from your pull-ups to help you decide what you should do with your windows either to protect your privacy, prevent the draughts or just make them look prettier. I have come late to this topic. Partly because when we moved in I was on a minimal, lightly Scandinavian, path and partly because by the time we had replaced the electrics, plumbing, kitchen, bathrooms, doors and windows there was no money left for fripperies. So it was minimal Ikea roller blinds throughout, but fixed across the middle of the sash to allow light in from the top downstairs with black-out versions in the bedrooms.

Over time we have replaced our bedroom blinds, first with white linen Roman blinds and then with a heavier green velvet version. It wasn’t until I moved into my office that I decided I wanted something lovely. So, on the recommendation of Sophie I rang Chloe at Willow Bert Interiors (based in the south east of England) to discuss what should be done. Regular listeners will remember I originally wanted curtains but the window slopes into a corner so there was nowhere for it to pull to the side and the frame reaches the ceiling so it was tight there too. In the end I opted for a London blind – this is a less structured version of a Roman so it falls in a gentle curve in the middle rather than the regimented Roman lines. I love it so much that I have immediately started looking for the sitting room which has a bay window. This makes curtains problematic as it’s a narrow room and finding the space to pull them back will compromise furniture placement. I also think the London blinds will look a bit like frilly knickers when there are three of them hanging there so it’s back to the Romans.

I plan to source the material from the Haines Collection, which, as I have mentioned before sells remnants and seconds to save them from being thrown away. I need 8m which is much less than curtains will take making it more affordable too. As I have done in the office I plan to use a ticking stripe on the back so it will look nice from outside as well. I used a a pink version from Ian Mankin in the office with a classic William Morris Honeysuckle print on the front.

Sophie has a friend who had fairly plain stripes on the inside and, on the side facing the garden, she chose a zippy neon chintz so it always looked pretty when they were sitting outside looking in. A great idea if funds permit. two sets of ready made curtains sewn together will give a more luxe feel to a window, image by alun callendar of Sophie Robinson’s house

There’s no getting around the fact that curtains are hugely expensive. They need a lot of material and skill to make and there’s a good chance that standard readymade versions won’t fit your windows. So what to do? Firstly, if you are thinking you might move, or your tastes might change, then you need to think carefully if you want to invest in bespoke curtains in a neutral colour that might be able to move with you or if you should jazz up some ready made ones.

Sophie has ordered some plain linen curtains for her bedroom ; there are three windows and she needs 25m of fabric – but she is also going to add giant pompoms from Samuel and Sons. This is an easy way to dress up something plain and means you can change it in time if you want to change the colour of the room but can’t  bear to replace the curtains. There are so many gorgeous frills and trims you will get lost in the site. Plain colours are also more affordable than flamboyant floral designs. And, of course, you can also do this with readymade curtains to create something more bespoke as well. Remember Sophie bought some ready made curtains for her sitting room but to make them more luxurious she bought two sets for each window and sewed them together, which is another good way to pimp your window (see the striped curtains above).

Finally, where possible, you want to hang your curtains as high and as wide as you can so buy long poles. This is not only so they don’t cut the light but it will also make the window look bigger. Pelmets are up to you. Some feel they make a window look more finished, some feel they are an unnecessary furbelow. Personally, I would choose a fabric covered wooden pelmet that isn’t frilly or fussy but that’s my taste.

When it comes to blinds, some will say they should sit inside the window frame (see below) others that they must go above so they don’t cut the light. It’s your room and your taste but if the room is dark anyway I would perhaps go for the latter. And if your frame is nothing special – or you don’t like it then you want to cover it as much as possible. pompoms from samuel and sons

We can’t leave this subject without looking at privacy. Nets have been seen as desperately old fashioned for years but Pearl Lowe is a fan of antique lace curtains so it’s probably only a matter of time before they return. Window film is also popular although don’t forget that while people can’t see in you can’t see out either. For my sitting room I am looking for pull-up blinds which, as the name implies, sit at the bottom of the window and pull up to the middle where they attach with a magnet. The 20yo has them in his street-facing bedroom but they are a little “office”. I think it’s a lot more common as a concept in the US although a quick search did reveal some options here but I know nothing about the companies so I’m not going to link. If you have any recommendations then do add them in the comments below.

And we can’t leave without mentioning the short curtains and radiators dilemma. I like long curtains, they just look better. If you have radiators under windows (as many of us do) then you can, as Sophie suggests, have a blind and add curtains for dressing. I would just go with the blind. There are so many gorgeous fabrics around and a velvet Roman or floral London is, to my eyes, no less luxurious than a curtain. And much, much cheaper. 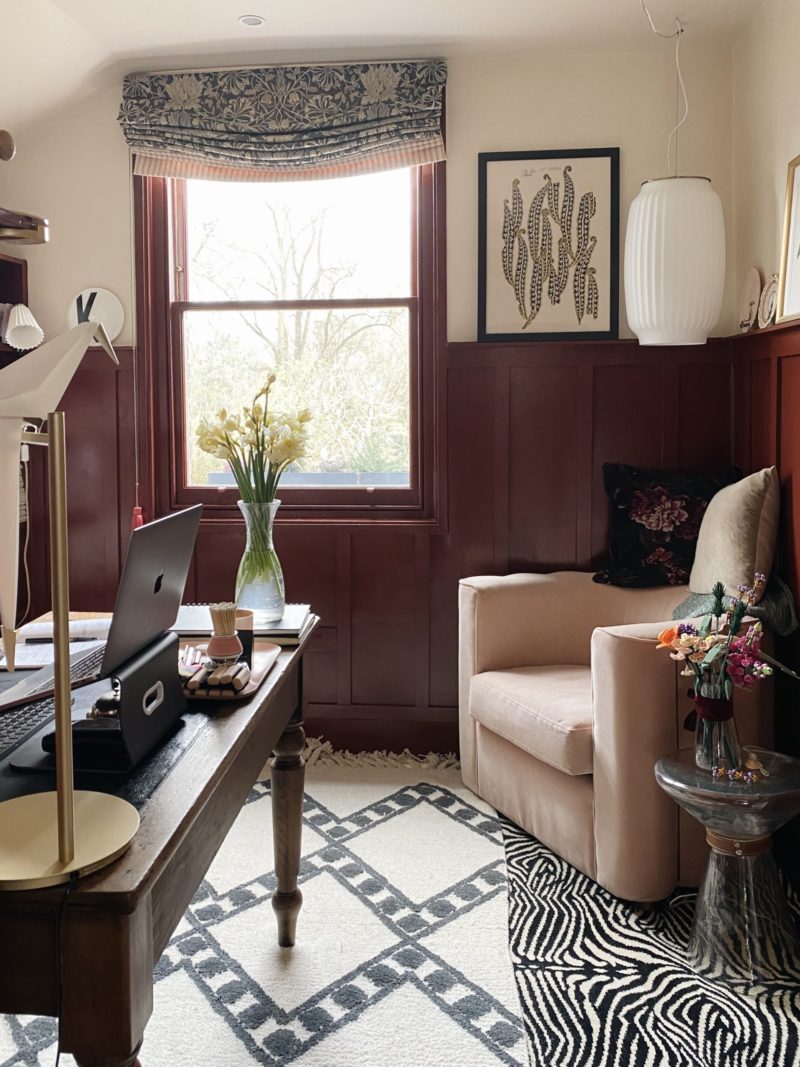 So there you have some curtain thoughts. I hope that has proved helpful. Elsewhere on the show we discuss the resurgence of English Country Style – which I wrote about last year. And Sophie announces that she wants a cat so we discuss pet-friendly furniture. You can, of course, listen here.

With huge thanks to our sponsor Harlequin, part of the Sanderson Design Group, for sponsoring The Great Indoors. They have redone their website with lots of in inspiration and digital design books to make it easier for you to sort through all their fabrics and find the one you want. The Househunter: Hillside House in Hastings

Tips and Tricks from a lifetime of sourcing vintage furniture