Vittorio Bertazzoni is proud that his company Smeg is thought of as Danish by many people. It is, for him, a badge of honour that his products could be confused/associated with the Scandinavian obsession with form and function.

But Smeg is, in fact 100 per cent Italian. Its name an acronym for Smalterie Metallurgiche Emilliana Guastala (the last two names of the town and county where the company was founded by his grand father, also Vittorio).  Everything is designed and made in Italy – that other great behemoth of product design alongside the Danes.  Indeed, in the battle for design supremacy it is hard to say who wins – for the Danes form and function are a marriage of equals. For the Italians design is key, but a little bit of flamboyance never hurt anybody. And a touch of that flamboyance is why I was meeting Vittorio in Milan during the annual furniture fair. A rare granter of interviews, he had just released his second collaboration with Dolce e Gabbana at a party at their headquarters. Even D and G themselves were there although it’s a bit like Ant & Dec – I’m not sure anyone actually knows which is which. And I only saw one of them too. But I was with clever people from Hello! and Vogue so all I had to do was nod when they pointed.

It was a terribly glamorous do. There were assistants to hold your phone and film you making pasta using their Dolce e Gabbana pasta machines. I trucked up asking to have a go and was immediately whisked backstage for a going over by a professional make up artist. I still can’t decide if I’m flattered or insulted by that. No-one else in our party (most of them half my age)  received the same treatment. You can see the video below.

The following day I went to meet Vittorio at the grand opening of the new Milan store. He took me to an office where the first thing I saw was a Union Jack fan fridge. This feels faintly shocking in the current febrile EU climate. Although it has just been announced that Smeg is about to open its largest flagship store in the world in London in September.

I had been intending to go in with the fluff. The fashion story of the fridge and the party. To warm up this reluctant interviewee. But there was the Union Jack glaring at me from the corner of the room. “So you’re coming to London then? But what about Brexit? And this flag?” I blurt out. It turns out – I learn later in a taxi to the airport – that the Union Jack fridge sells best in Germany. I’ll just leave that there. In the meantime, Vittorio is charming and polite. For him the Union Jack is more personal – it was the first flag fridge he designed. Even Italy came later. He studied in Oxford and loves the design. That is all.

He guides me gently away from my Brexit anguish and back to his new store at 14 Regent Street, which has the biggest single pane glass windows in Europe. The new store will be spread over three floors with a coffee bar –  a demonstration area and organic Parmesan from the family’s farm in Guastala. In a few months time you will be able to pop in for a new fridge and a slab of cheese at the same time. Or you can just go in for the cheese, they won’t assume you are there to buy appliances. 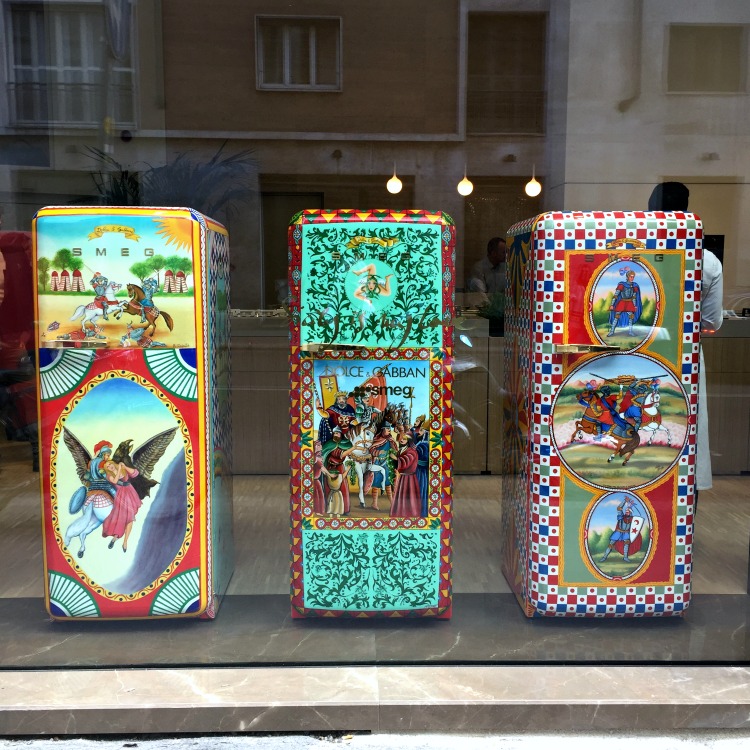 And that is the key to the Smeg brand. It doesn’t see itself as being in competition with other appliance manufacturers. It regards itself as competing with other luxury brands. Hence; you have some money to spend – will you buy a Smeg fridge, a pair of Jimmy Choos or a Burberry coat? For Smeg, these are all choices on the same par.

Mind you, Dolce e Gabbana aside – their toaster will cost you £399 – buying something from the main Smeg range is probably cheaper than a pair of Jimmy Choos.  Although in the U.K, Smeg is known mostly for the retro curves of the FAB fridges –  so ubiquitous in the middle class kitchen at one point that they were gently lampooned by Aardman films who gave Wallace and Gromit a SMUG fridge in one outing –  the company was all about cooking before it turned to refrigerating. 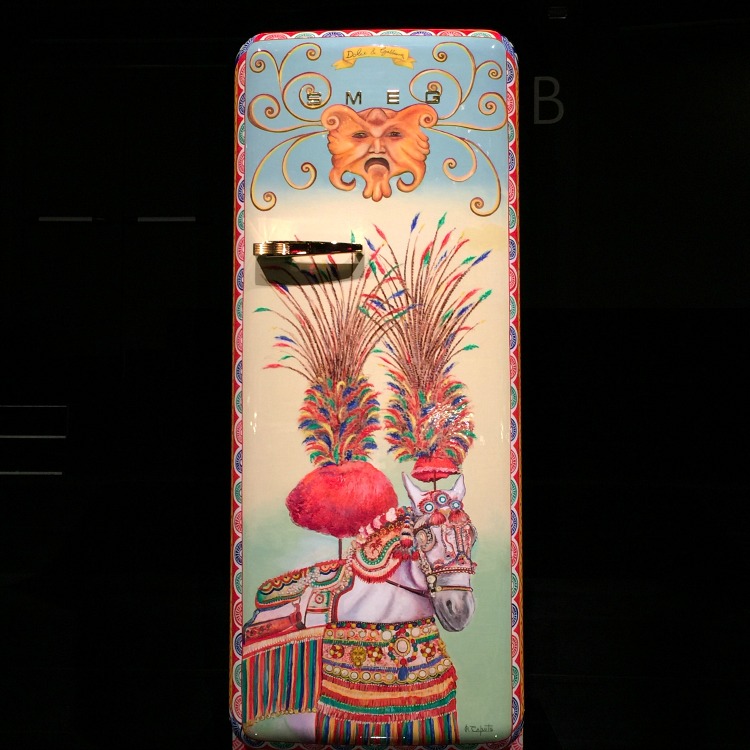 Like so many of the Danish companies, Smeg regularly works with architects on its products so you can visit a Renzo Piano building (The Pompidou in Paris, The Shard in London or the Whitney Museum of American art in NYC) or buy one of his Smeg ovens and hobs which are pretty sleek.

It’s the opposite of the collaboration with D & G, whose voluptuous Italian models are such a perfect match for the rounded curves of the fab series. This is loud and colourful and celebratory. It’s the second time the two have collaborated. Last year it was fridges, this time it’s small appliances – toasters, coffee makers and juicers. All have been handpainted with Sicilian motifs (one, I forget which – either Ant or is it Dec – sorry I mean – Dolce is from Sicily) including lemons and flowers and leaf patterns.

“We are all friends,” says Vittorio. ” I have known them a long and we are both traditional Italian companies. We both design and manufacture in Italy and it felt like a natural partnership. We have a lot in common and we share a pop soul.”

He won’t be drawn on other collaborations but said there was “more to come from this partnership”. And with that I must go for I, literally, have a plane to catch. I leave Vittorio wandering round his newly opened Milan store and make a note in my diary to shop for Parmesan in London in September. Smeg are keen to point out that they are the only company that makes everything for the kitchen from large to small appliances. You can see the full UK range at Smeg UK. I really, really want the D&G toaster. Definitely more than a pair of Jimmy Choos. Might be a tough call with a Prada handbag though.