How To Revamp Your Home Without Spending Any Money

It never goes away does it? That feeling that somehow September is the proper start to the new year. I mean of course we all know that technically it’s January, but for anyone who has children and, I’m willing to bet, those that don’t but whose lives were governed by the rhythm of the school year for so long, September has just as much importance for that feeling of starting again. The French call it La Rentrée – the return – but actually I think it carries more weight in its literal sense – Re-entry. It’s a re-entry to timetables, to that familiar rhythm of routine that governs our days. And with that comes the shiny new pencil case feel of buying the back to school equipment – new pencil cases and shoes, uniforms and bags. But for adults too there is a sense that the new collections are dropping so it’s time to put away the sandals and summer clothes and shop for new winter gear.

Except that this year the charity Oxfam has launched a campaign called Second Hand September. It’s asking us to take the pledge that we won’t buy new clothes for a month. To reduce the weekly toll of 11 million items to landfill and to restyle our wardrobes using what we have and what we can pick up second hand or, as some call it, pre-loved. And so I thought I would take the same approach to interiors. After all, as the autumn evenings take on that familiar chill and the long summer evenings shorten each day, it’s tempting to want to buy new things for our houses. To swap the linen cushions for knitted, to buy a throw and maybe a new rug in warm earth tones now that the new collections are dropping every day.

That’s not to say I won’t be showing you those new collections because this blog also exists for that. But I thought that today we could have a look at ways to restyle your home for the new season without spending any money. It’s called Shop Your Home and the main principle is about moving things around because by putting them in different rooms they will bring a different feel to the space. So how to do it?

Well, the most obvious is the one that is the most difficult for many of us and it’s about moving the furniture around. Now I get that most of us can’t move the bed or the sofa as they tend to be fixed in the one place they fit, but that doesn’t mean you can’t swap other things. Bring the armchairs from one room to another. Or change the side tables around.

We use stools as bedside tables and have been known to bring them to the sitting room and take small tables from there upstairs. On the subject of tables try re-arranging the coffee table so that it has different books or ornaments on it. Anything that can ring the changes make it look new and different.

Another idea is move pictures around. Re-arrange a gallery wall or swap art from upstairs to down so you can see it more. If I’m honest this doesn’t work in our house as The Mad Husband is adamant that once a space has been found for a picture that’s where it lives and you can’t just change it because you feel like it. I don’t entirely agree with him, but we share this house so concessions have to be made. I just buy something new/vintage to add to what is there as a way of changing the feel. We bought these botanical images on holiday this year and the bedroom gallery wall is growing.

I swap cushions around all year from the sitting room to the library and up and down from the bedroom. Likewise throws, which can come out of the cupboard now that the evenings have a chill in them. 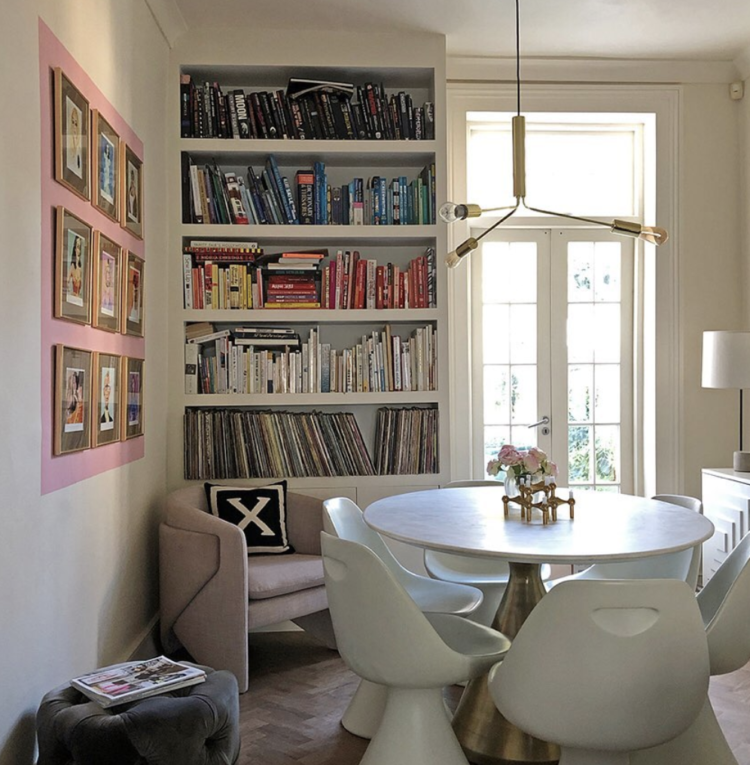 Rugs are another thing that can swap around to change the feel of a room. This is also something you can think about for next year – if you had a pale Berber style rug down all summer now is the time to roll that up and store it under the sofa or bed and replace with one that is more vibrant or warmer in tone. Perhaps you already own something or perhaps you will buy with a view swapping them back when the seasons change. And I’m pretty sure that buying a vintage rug counts towards the second hand September pledge.

Talking of which, the campaign, as it’s run by Oxfam is not completely about not shopping (they have stores too) but about shopping less and more responsibly and also about shopping vintage, used and second hand. I have scored some great pieces from charity shops, junk shops and ebay and it’s always a joy to find things that no-one else has.

Once you’ve shopped your own home and the second hand places you can also see if there’s anything that can be done with leftover decorating materials. I showed you yesterday how Bianca Hall has used a tester pot to paint a coloured square to highlight her gallery wall. Over the weekend Kimberly Duran said she had just enough left over paint to do one wall of her spare room. This means that when she walks past the open door it looks great as she can forget about the other three walls that she hates (and that need completely stripping back) until she has the funds to do the whole room. Alex Steadman, of The Frugality, has just painted her whole spareroom with leftover paint and, Mary Le Comte, who has featured before, used blocks of colours to decorate her son’s room. When we decorated the bathroom we had some leftover black and white encaustic tiles which I later used on a fireplace hearth which was just painted cement. There were just enough for that. There were also some leftover black slate tiles which have been sitting in the cellar for a few years. But when we redid our ensuite there were a few marble tiles the same size that weren’t needed. The plan is to use them to decorate a table for the garden. I also asked the builder to cut a couple of them into four so we have some marble coasters too.

Finally, think about moving plants to different places to give them a change of scene and even swapping table lamps from one room to another. All these details will help revamp your house and make it feel new and exciting again. We change our clothes with the seasons so why not our interiors?

These are just some ideas and I’m sure you will have many more of your own so I wish you all a Happy New (School) Year and have fun rearranging. Do share your ideas in the comments below so we can gather as many ideas as possible.