I’m going to finish this mini series of the greatest rooms of the century by looking at some more recent designers. When I spoke to William Norwich, the editor of this Phaidon book, he told me that while they started in the 1900s (see last Monday’s post for a room for each decade) sometimes when people talk about 1960s design, for example, that might run into the 1970s so they took a loose approach to the idea of a century and included some more recent ones. I have chosen some of my favourites  (led, as ever, by those which were given publication clearance) to show you here. Starting with one of my favourite designers and always a highlight of the Milan Salone; the Dimore Studio. This Italian American partnership (Emilio Salci and Britt Moran) started with residential projects and have since gone onto create boutiques for Sonia Rykiel, Hermès and Fendi as well as their own furniture line. This room, completed two years ago includes the soon-to-be hot pale blue, the current orange and yellow, curves and a bit of jungle. David Chipperfield, Fayland House (for private client), bathroom, Chiltern Hills, England, UK, completed 2013. Picture credit: Simon MengesI felt it was important to include this as it’s one of the few that is really grey and, like it or loathe it, grey has been massively influential in recent years. My theory is that once we moved on from magnolia and took to grey, that opened the door for all the other colours as there’s no denying that grey is a great backdrop to all the other shades.

Once we became bolder with colour, many people ditched the grey all together and just kept the colour. Obviously this is less grey paint and more about natural stone and textures, but I find myself itching to colour that chaise in the background, or bring some of those plants inside. It’s an English country house, by the way and I love that it’s been done in a completely non-traditional way –  so sometimes you have to look at the context before you judge the room. This is another very understated colour palette but the the wood and unusual floor lamp (1950s Italian) bring a warmth to the space that a modern piece would not. Robert Stilin’s signature is about mixing modern and vintage with colour, shape and texture and this room deserves a closer look to really understand all the layers. Now this room was created by the pair that bought out the Nicky Haslam studio and now run its shops. Moschino (Italian) and Vergeylen (Belgian) have taken Haslam’s traditional English style and created a more international outlook. This is the drawing room of their London apartment but it definitely looks more Parisian. They made everything larger by reducing five bedrooms to two which allowed them to double the size of this room and add a dining room. While you might not be able to do that, it’s a lesson in creating a space for the way you want to live rather than being dictated by the space that is already there. 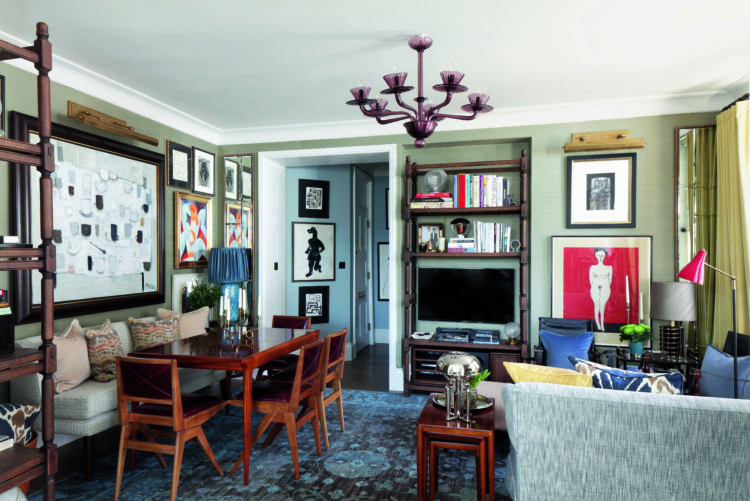 Another big name, like Dimore Studio, Martin Brudnizki has worked on the Miami Soho House (the current design director Linda Boronkay did part of her training with him) as well as The Beekman Hotel, in New York and London restaurants including The Ivy, Le Caprice and J Sheekey as well as the recently revamped (and hugely extravagant Annabel’s nightclub – google the loos). Originally from Sweden, this is his two bedroom flat on the top floor of a mansion block in West London. Once again he took down walls to create larger spaces and layered furniture styles and lighting – LEDs are banned from his home. This 2012 room by Sandra Nunnerley, feels very now with its pale neutrals and abundance of textures. It looks like a real room that would be very comfortable to be in and one that we might even be able to recreate. This is her New York apartment and while the sofa was custom-designed to fit the alcove it’s more about the colours and shapes that we can learn from . Ashley Hicks lives in the Albany in an apartment complex which has been home to Lord Byron, JB Priestley and Aldous Huxley and he inherited this from his father, the interior designer David. This is colourful – I included it for the pink and green combinations – but also it also feels very English despite the resin and gilded pine table. 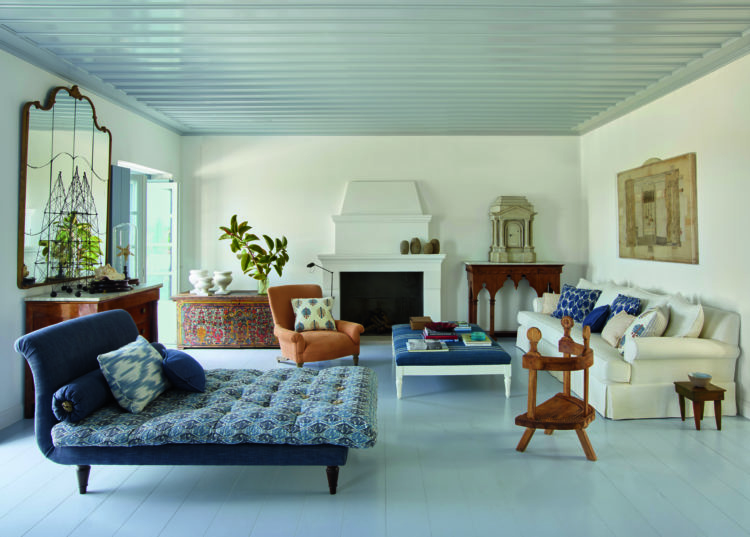 Aside from the fact that I would add a huge rug to pull it all together, I love this room by Isabel López-Quesada. Having said that it’s in Greece so they probably don’t want anything to increase the warmth in here. The combination of navy, cream and tobacco is particularly gorgeous and feels a little more contemporary than the usual pale blue and white that seaside homes tend to default to. Plus, that daybed – yes please. 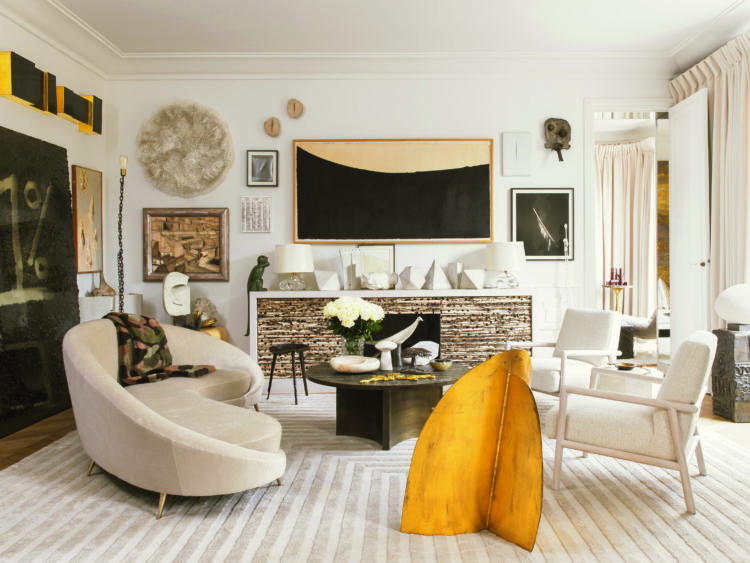 More restful neutrals in this room by Chahan Minassian in Paris. That curved sofa is just gorgeous (try the Graham & Green Tiffany for a dupe) and while I’m not sure about the gold piece of art in front of the chair I love the colour of it. Perhaps the rest of us could opt for a few cushions in that colour to echo this sense of paired back opulence. And if you love the artwork over the fireplace (by Richard Serra) may I refer you to a friend of mine Charlie Oscar Patterson whose latest collection includes this which I really, really want.

And there you have it. I have loved browsing through this book and while there are many more I haven’t been able to show you – Dorothy Draper, Ettore Sottsass, Min Hogg, Lanvina and Lautner, Dirand and Deniot, I hope you have enjoyed it too. It’s a fascinating book and if you are at all interested in the history and development of interior design then you should put it on your birthday or Christmas lists. I have linked here because while the RRP is £50, you can find it more cheaply. The only question is which of the four colours will you choose?