Something a little different for you this Monday as we have a whole apartment to look around and it makes a lovely contrast to the somewhat more colourful apartment we looked at on Friday. This is an 18th century Grade II listed building that has been renovated by architecture and design studio Red Deer. Now I’ve said it before, Georgian buildings are the Kate Moss supermodel of the architecture world. Square rooms, high ceilings, panelling and moulding, it’s pretty hard to make a Georgian house look rubbish. As long as you let its natural features stand out it can take any furniture. Like I said – put Kate Moss in a bin bag and she still looks good. The architects stripped the building back to its 1750 shell. Downstairs there is an open plan kitchen, dining living space with the master bedroom and bathroom as well as an outdoor terrace while upstairs there is a second bedroom overlooking the terrace.

Now while they reconfigured the layout to suit a more modern life style (narrowing the hall to accommodate two smaller bathrooms) the designers went to some length to source period fireplaces and restore original mouldings and plasterwork. 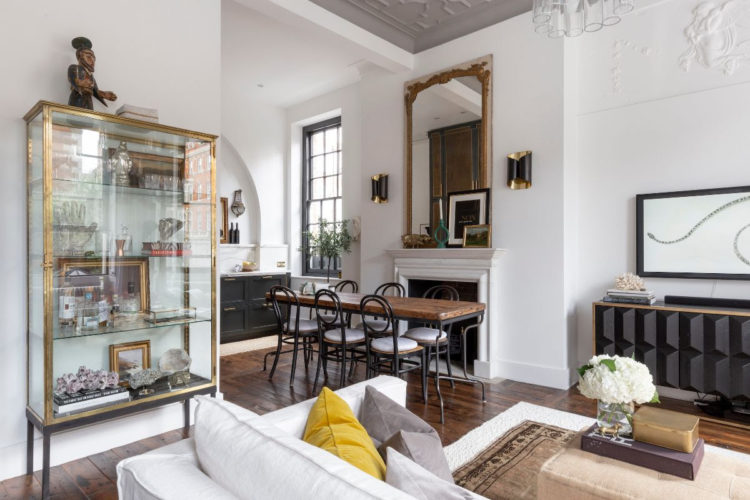 The colour palette was deliberately kept minimal black, white and wood to allow the brass details and building’s features to stand out. And the whole thing is, indeed, really restful but it would be easy enough to add colour if you wanted to by replacing the white sofa ( a bold move by anybody’s standards) and choosing more colourful pictures to hang on the wall. Here’s an interesting detail though – it looks like – above and below- the vintage rug is laid on a plain white rug underneath. There are several possibilities for this given that one assumes there was enough money in the budget to buy what they wanted. But that opens up ideas for the rest of us who might not have…. if you fall in love with a rug that’s too small for the space, can you lay it on top of another plain rug/carpet that then creates a border all the way round the edge and makes the whole thing look bigger. So it’s not rug on carpet but rug on rug making interesting design border. What do we think? Moving into the bedroom and it’s a feast of panelling and plasterwork. This only works because it’s original. If you added this much to a room that wasn’t meant to have it it would look terrible. Don’t try this at home. Pick one or the other. You can see also as you wander through these rooms how the gold velvet cushions pick up on the brass detailing on shelves, lamps and light switches. You can disguise cheap furniture if you pay attention to the details. Spend money on the touch points and the bedding and you can hide an ordinary chest of drawers (or paint it) and plain side tables. Still haven’t made my mind up about this bedroom yet. Normally I love a half-painted wall but I think this one doesn’t go high enough. I would aim for a two thirds/one third split rather than half way up but that said I love how the paint has completely wrapped the room from window frames and door to the alcoves as well. And to finish a show stopper of a bathroom. All those brass touches come together in one large glorious splashback which is also a reversal of the more usual brass taps and plain walls. Here the taps are black and the wall is brass. Practical? I imagine it will acquire a patina with time and can be sealed to stop it getting damaged. What do you think? I think it’s rather fabulous and, for me, easier to live in than the stronger colours from Friday. Join the debate below.

10 Things You Need to Know about Art Deco