There has been a lot of talk about the ceiling being the fifth wall and how you shouldn’t just paint them white – well all right that last bit was mostly me, but I thought it might be fun to look at a few painted ceilings in honour of the fact that I am about to paint my spare room ceiling gold. And, because white is the default colour when it comes to ceilings. I know that’s definitely been the case in my house, although I also know that The Mad Husband is quite keen on a white ceiling. It took a long time to persuade him that doors and walls look better when they are painted to match the walls. He was quicker to get the skirting board argument and while I say I may never win him round on ceilings, he has agreed to go for gold on the first one. I did point out that he never goes in there which may have helped mind you. 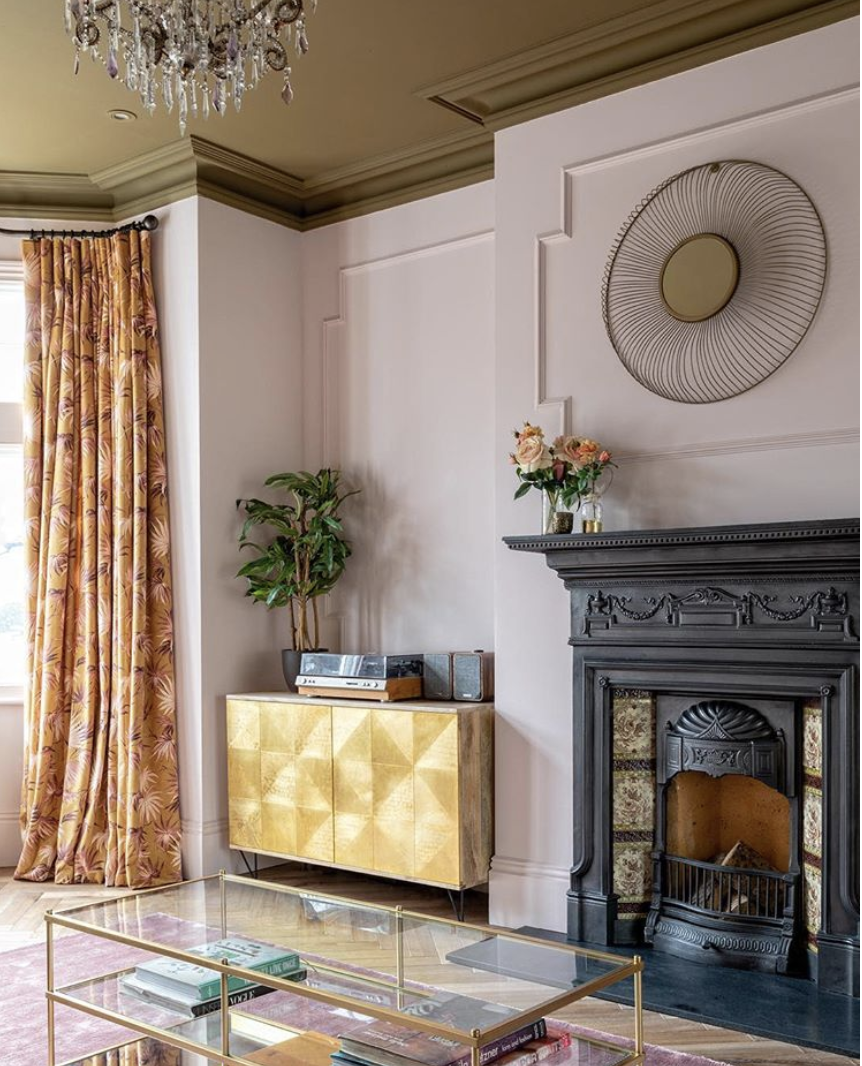 interior design by Em Gurner of Folds Inside

Anyway, look at a few of the beauties here. The first one was for a campaign shot for H&M last year and I don’t know if the location came like that or if they painted it to suit. Above is a recent project by the supremely talented Em Gurner of Folds Inside. I initially thought it was a dull gold but it’s actually olive green.

I’m aware that a super high ceiling makes it easier to pull off this look – it’s the old supermodel theory of Kate Moss in a bin bag – but Em has done the same thing with this bedroom below where the ceiling is much lower and it still looks great. The walls are a really rich burgundy and while painting the ceiling white would have been the obvious thing to do, look how much better it looks in pale pink. It makes the whole room look finished off. And that, I think is a really important point. This room looks like every detail has been considered and nothing was left out. Yes, there is a white radiator but it’s a feature one not a modern slab and it sits under the white window. I also love the blue curtain which was a bold choice and one, if I’m honest, that I probably wouldn’t have made because I’m not good at having too many contrasting colours in a room.

The key every time is to look at the colour of the walls and ask yourself if white is the best compliment to that. Yes a white t-shirt probably goes with everything in your wardrobe but is it the best choice? I’m not banning white paint – contrary to popular belief – I’m just asking you to ask yourself if it’s the right thing for the room. Above and below are a couple of press shots from Bo Concept. Yes, they’re both in the same room but the furniture is very different and I particularly like the contrasting orange chairs with the pink ceiling.

I also thought it was interesting that, at this stage, there are quite a few pink ceilings around and not so many in other colours. This comes back to another point I have made that pale pink is a really good neutral. Perhaps it’s the new grey. It goes with every other colour – either contrasting or complimenting, it’s not too dark so it’s easy to live with and it’s not too much of a shockinge change from the white. On a practical note, you can tell those who say they don’t like pink, that it’s beige or mushroom. That’s put an end to more than one domestic dispute that I have come across. Also, and I wrote about this in my book, pink was originally for boys as it was thought that was a much stronger colour than dainty blue. Blue is the colour of the Virgin Mary’s dress was the thinking. It was changed for a US marketing campaign in the 1940s, because – it is widely assumed –  that that would encourage people to shop as they would no longer use their old pink boy clothes (and vice versa) for fear of being thought old fashioned.

I also wanted to show you this room by Emma Jane Palin, which doesn’t show the ceiling, but does show two really bold stripes on a pink wall showing another way to be bold with paint and also how pink really does like all the other colours. Here the effect is warm but a couple of black or grey stripes would work brilliantly as well and take it from warm Califorian vibes to a soft industrial feel. Of course if you wanted to be really subversive – that’s a little strong but you know what I mean – you would do the whole thing pink and leave a wide white stripe all round the top. Finally, I wanted to show you a couple of images where the paint colour has been taken up the walls and over the ceiling as well. First up is Erica Davies study which is painted in Earthborn’s Hobbywood . It’s a wonderful colour for an office – at least I think so as I find green really restful. But the other point is that cocooning the room in the same colour all over is also calming as it doesn’t distract the eye and draw attention to the edges. And then there is Jess’s bold, black bathroom. It’s a really dramatic choice for this room but it works because there is a) plenty of natural light from the window b) that window shines onto the gallery wall opposite which will also reflect and bounce the light around from the glass frames c) the brass cupboard reflects onto the white bath opposite throwing the light round still further d) the large pale marble shower and glass enclosure. So yes, a brave choice, but one that totally works.

It would a different story in a bedroom or sitting room where the soft furnishings would absorb the light rather than reflecting it. So, painted ceilings? Who’s in?

The Househunter: Old and New