Well as it turned out it wasn’t a bad week to have Covid as it was a long weekend with lots of telly and no-one was reading blogs anyway. But we’re back now and normal service is resumed. Thank you all for your kind wishes over the last ten days. In the end, for me at least, it wasn’t much more than a bad head cold with a short-lived cough and a side dish of tiredness. I was very lucky and even luckier to have secretly rather enjoyed a week of bed rest with the entire series of the Dr Ruth Galloway mysteries to read and The Mad Husband bringing me room service. There are 14 in the series – I started the first in Marrakesh and finished the last on the day I tested negative. So beautiful rooms then – what have we today? Borders are definitely becoming a thing as I showed you with Susie Atkinson’s wallpaper borders a few weeks ago and here Hannah of @half_a_hall has painted stripes around her alcove. Such a clever idea and, if you have a steady hand or a roll of masking tape, not too tricky the do – the point being that it’s a small area and you will see the change fast. There’s nothing more disheartening – for me at least – than embarking on a big wall/room full of excitement and finishing the first coat only to realise you’ve got to do the whole thing again. A small area of stripes is a quick and transformative win and I can’t think of a room where it won’t look fabulous. Stick to classic black and white or pick up tones from the rooms either side. 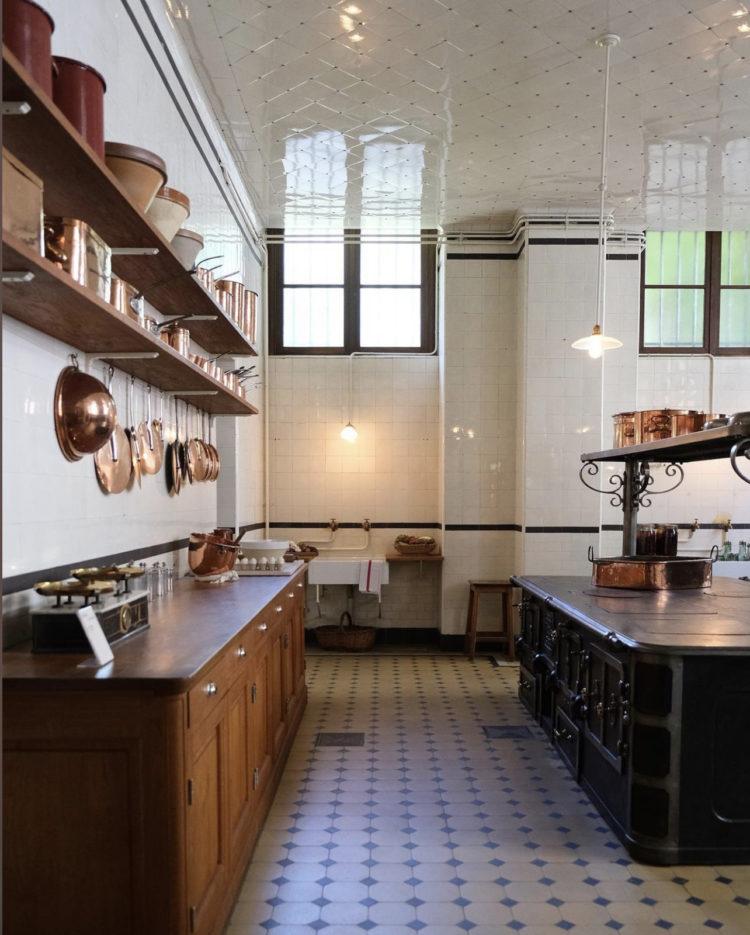 And here’s another clever little transformative trick. Regular readers will know that I stuck tin tiles over my kitchen ceiling which is too low to add statement pendant lighting. I wanted to add a feature and, given that the extension is a box on the back of the house that risks making the interior darker I needed to find a way to bounce the light back in. This is the same principle but the same effect has been created with shiny white tiles – perfect for a kitchen. I’m sure it’s a nightmare to do but the effect is great. You could do the same in a bathroom too. Now this wasn’t labelled as such but I’m pretty sure it’s the former flat of interior designer Ilse Crawford. I was very keen to do this in a the kitchen of a house we looked at before we bought this one. As it turned out this wasn’t quite the right kitchen to do it in but if you live in an open plan space and don’t want the kitchen to feel too “kitcheny” this could work quite well. Of course you’ll need to consider what you put on the bottom shelves for dust and dirt but I think it would work quite well for lidded pans and casserole dishes that don’t get used every day. It’s not for everyone but, as ever, these pages are about showing you lots of ideas and seeing if it sparks an idea or an adaptation that speak to you. A little moment for the checks that are taking over at the moment. Now, remember, while some (few) trends are new or new interpretation of old ideas, there are other trends that are classic ideas that, for inexplicable reason, suddenly get their moment in the spotlight. We saw it with brass – a classic material that basked in the white heat of fashion for few years before sinking back to traditional status. Checks are the same. They have been around for ever, they will always be around and they will always look good – it’s just that at the moment everyone seems to want them. For this reason, if you love a trend that has come from a classic design don’t worry about adopting it.

The key is knowing how to judge it – copper came out of nowhere, dominated for a few years and sank back without trace – it was like a meteorite and now it looks dated. Brass and checks are the classics, the combination of pink and green, while found in nature, may be inextricably linked to the cinematic dominance of Wes Anderson. And just yesterday I read about the re-emergence of magnolia and cream – again it’s classic but this time you need to pare it with shades of terracotta, chocolate and black to make it look modern. A case in point – terracotta and cream tiles – on the surface you can’t imagine a more classic paring. This kitchen works because it’s a simple cream kitchen but the dynamism is all in the floor and note the afore-mentioned black accents in the form of the wall lights.

Below is a bathroom which was created by Victoria Alderson for less than £1000 using eBay and Facebook marketplace (and her handy husband’s skills). This proves a point I have made many times before and that is that you can save money if you spend time. Once again the classic terracotta and cream tiles this time pared with that deep blue of the wall tiles and the rattan lamp and mirror. Note how the brass taps appear classic here as they fit just as well within this room as they would in a more modern all white space where the brass would warm it up a little.

If your bathroom is smaller than you would like and you have a fitted bath then taking the tiles up the side will make the space feel larger and I love the styling touch of the soft blue towel taking the blue from the walls to the floor. You can see the blue door frame reflected in the mirror too as well as the blue window frame. 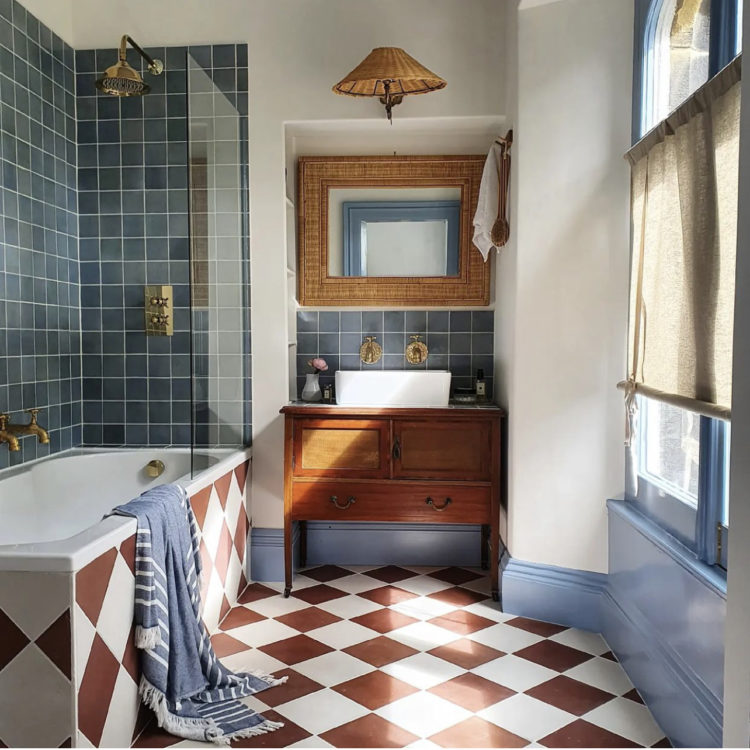 Discussion: Designing Sustainably for the Home