Monday Inspiration: The Power of Paint

I wanted to talk about the power of paint today, with a few examples of people thinking about how to harness its transformative power in more unusual ways than just sticking it all over four walls. Or, worse, just one…. Come! First up is this gorgeous pink from door by Mary of Mosey Home. A former curator at the V&A, Mary’s shop is a feast of mid-century delights and her north London home is also full of clever tricks. We’ve spoken before about the joy of painting the front door in a colour that makes your heart sing when it greets you every morning and this is a perfect example in an otherwise white space. But the rug in the foreground (might be last year’s H&M or Ferm Living) with its bold rectangle just echoes the shape and colour of the door and gives it even more impact.

It’s one of those touches that looks effortless but makes a huge difference to the overall effect of the space. 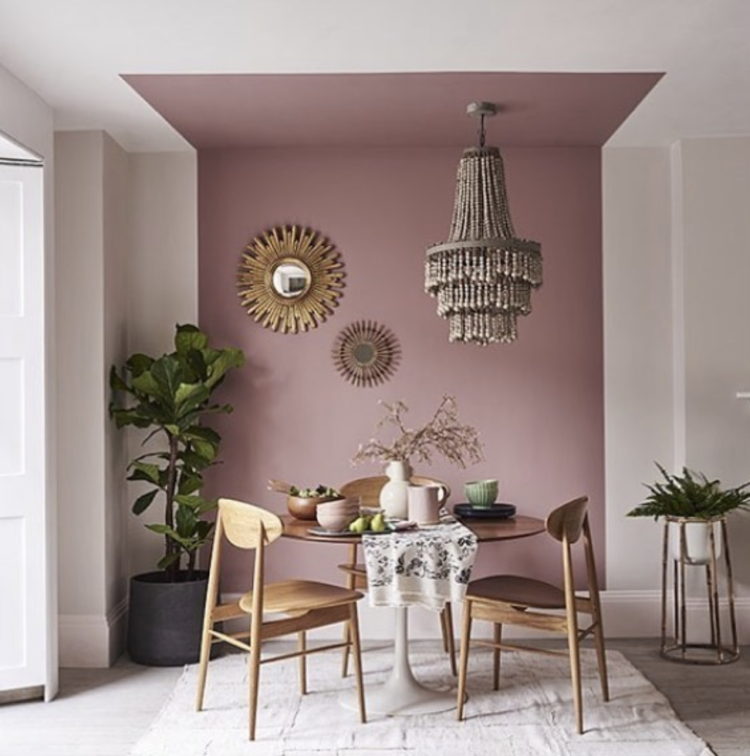 Now, the feature wall. You know I have said before that for me it’s a bit of a design crime. That doesn’t mean it has to be for you, but let’s look at ways that, I think, make it work better. I get that you might not want to cover a whole room in a single colour. That you might want to have a “pop” of said colour without overwhelming the whole space. That that might well be the chimney breast, or the wall behind the sofa.

I also know that if you live in an open plan space, using paint to define and “zone” said space can be a great idea. You will remember a couple of weeks ago I featured a dining space belonging to my client in the Hoover Building where we painted two “feature” walls rather than one to create a dining “room” by taking the paint round the corner. By wrapping the paint around another wall that creates a real sense of a dining room in the open space rather than just a wall with furniture in front that can feel a bit two dimensional – a bit stage set if you like. The glimpse of blue to the right of the image is a supporting pillar that we also painted by the way. You can see it in more detail here. That’s one way to do it. Another, if you don’t have a corner, is to see what Dulux have done above with their pink wall. This works well on a high ceiling and also behind a bed if you don’t have a statement headboard. Here the pink, which is effectively in a giant stripe perfectly zones that space and provides a frame for the mirrors. While we’re here, you can see that the light fitting is off centre. Let’s assume that wasn’t deliberate. That the room came like that, as you might well have a similar issue and not want to pay an electrician to move it a few centimetres. The mirrors on the wall, which are similar in style to the light fitting, have been hung to create a set of three with all three objects including the light, taken as a whole, in the middle of the pink. That’s definitely an idea to steal. half painted wall by The House That Black Built

Two more examples of using strong colours that aren’t feature walls. Above, Chelsea of The House That Black Built, has simply taken a line and painted round the whole room. She has gone higher than the fireplace as otherwise it would have felt proportionally wrong – you need to go slightly over halfway up – and gone round all four walls. It’s not too dark (it would hide the telly if there was one) and the pale floor, top part of the walls and ceiling all balance out the dark. Below, Jen, at The Squiffy Mill, has taken yet another approach. She has painted her chimney breast (I know this from other pictures in her feed) but rather than just abandoning the green at the edges, she has taken it round the rest of the room under the dado rail where it finds a natural level with the window sill. Don’t worry if you don’t have a natural feature like a dado rail, you can just do what Chelsea did and pick a point to paint to. green half painted walls by The.Squiffy.Mill

Finally, back to using paint for the details and the super-talented Melanie Lissack has created these shelves on her landing. The shelves are from Ikea and she painted them to match the skirting boards and door frame and if you visit her feed you will see there is a pink window frame beyond. It’s a pale colour so it’s not overkill and it brings a traditionally boring white space to life in the simplest of ways. Paint. It’s brilliant stuff. I hope these images have inspired you to consider how you might use to create something wow in your own homes.