Now one subject we haven’t touched on in The Great Indoors Podcast is accessible living and we thought it was time we did. This was sparked, in part, by an email we received from a listener who said: “I’ve listened to all episodes (some twice) and I’ve got my red thread, crystallised my vision and streamlined my six year old Pinterest board…”
And then came lockdown – and a new priority emerged. Her elderly father came to stay as he needed to shield and she needed to make adaptions to her house without them looking too clinical or hospital-like. And, for a long time I have followed the interior design of Jo @wheelieliving, who suffered a spinal stroke two years ago and is now in a wheelchair and having to adapt her house. She talks eloquently on her instagram account about the changes that she has had to make and her new wheelchair accessible bathroom is gorgeous. The countertop basin above means she can wheel her chair underneath and she absolutely hasn’t sacrificed style for function. Sophie spoke to Gordon Whistance, the in-house designer on the BBC television show DIY SOS, on which Sophie has worked on a few episodes. The show, for those who haven’t seen it, transforms the homes of families who might have a member with a disability, or a life-limiting illness, and whose current home is severely affecting their quality of life. The first series of DIY SOS started on 7 October 1999 and began with the aim of giving householders the chance to have their bodged DIY jobs finished by a team of professionals (viewers voted each week to choose the most deserving case) but over its lifetime the show has doubled in length and grown in scope. It now produces life-changing building projects, like the rebuilt Dale Youth Boxing Club near Grenfell Tower and the Canada Street renovation for ex-servicemen, which featured the involvement of Princes William and Harry.

Gordon said the show often fills the gap for those who have literally nowhere else to go in terms of trying to make their homes really work for them (in the words of our podcast). So often, he says, it’s about the basic necessities but they can end up making a house look like a hospital. “Our goal is to give families a space that doesn’t feel specialist or like a hospital but is a place where they can flourish and they don’t have to feel that they are unusual or different. They deserve a beautiful home just as everyone else does so we come up with clever solutions.”

These might be very simple – installing underfloor heating so that someone doesn’t burn themselves if they fall and land on a radiator, or disguising a hoist so it’s not just a room with a hoist but a beautiful bedroom which happens to have a hoist in it.

Another issue can be for the carers who might have to do a lot of bending and lifting and so a rise and fall bath can help with that. “In one bath we installed speakers underneath for a boy who reacted well to music and he could feel the reverberation from the music through the water when he was in the bath,” said Gordon, adding that it’s the small details like this which often don’t make the show but which are crucial to the success of the design.

And it’s worth noting that these designs are done properly. There are no wobbly walls that might collapse when the cameras move on. It might be done on a tight timetable for the telly but it’s no Changing Rooms. It’s all done properly thanks to the huge teams of volunteers that turn up and work long days during the nine day transformation. “There’s no blueprint for the designs as each family’s requirements are different and each one requires a specific set of solutions. We tend to make two lists – one of what they critically must have; machines to keep them alive and plug sockets on separate feeds etc, and one of the things that would be fantastic if we can get them in,” says Gordon.

To that end, the show also tries to factor in the needs of the rest of the family – the elder sister who helps out as a carer, the younger siblings whose lives are inevitably affected or the parents who might just need a beautiful bedroom where they can rest.

It’s a wonderful show – I defy you not to cry – but it was also fascinating to hear about what goes on behind the scenes as well as the crucial point (for us at least) that good interior design doesn’t have to be sacrified on the altar of accessibility. 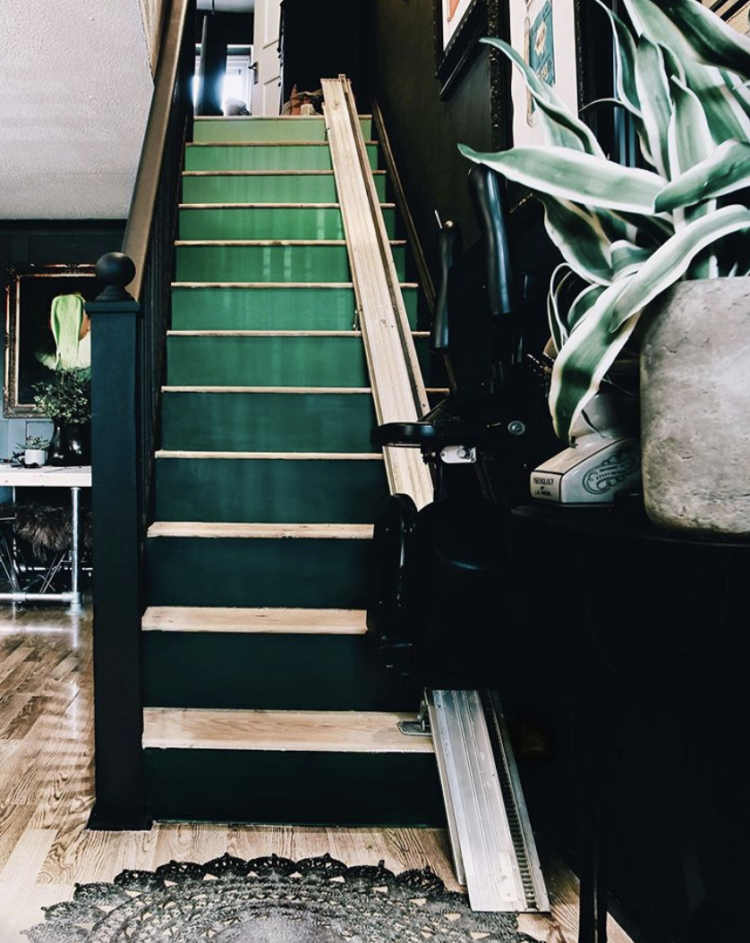 When Jo was redesigning her bathroom to accommodate her wheelchair she contacted Motion Spot, the design institute for accessible living, to help with the layout and factor in details such as the turning circle of a wheelchair and placing the basin on an open shelf so she can slide her chair underneath.

You can also follow Vicki @wheelchichome, whose husband has MS, and who is also adapting their home to accommodate his changing needs. And for those who want to learn more about accessible gardening I was recently contacted by Sue Kent, a foot masseuse, whose beautiful garden was featured on Gardeners World. Elsewhere in the show we spoke about how to create a focal point in a room and adding character to new build houses. You can listen here. With enormous thanks, as ever, to our sponsor Neptune, and our producers Kate Taylor and Sarah Cuddon of Feast Collective.