And we’re back! The Great Indoors Podcast Series 4 is up now for you to download from your preferred platform. We’ve got a brand new shiny sponsor, Topps Tiles, and for those of you who don’t listen (why not?!) here is what we discussed this week: the enduring appeal of mid-century modern furniture, everyone’s talking about sustainability and fabulous garden updates. The term mid-century has become a sort of catch-all for Danish furniture but in real terms it is pieces that are dated from the mid 1930s to the mid-60s and it was important in the US, where many of the key designers fled when the Bauhaus for the States. It was also popular in Europe with Le Corbusier and Alvar Aalto working on similar designs and Brazilian designers were also hugely influential on the style.

It wasn’t just furniture but also architecture and graphic design although it is the furniture that is particularly popular and influential on current designs. It fell out of favour towards the end of the 60s but was back by the mid 80s when it started to catch the eye of collectors and the original, and by then, vintage pieces started to fetch thousands of pounds at auction.

So why do we still love it today? In part, I think it’s a reaction against the heavy Victorian and ornate Arts & Craft furniture that preceded it. It was light and simple and embodies the expression that form must follow function. In other words, if that twiddly bit of decor serves no purpose then it doesn’t need to be there. Each piece of furniture was first and foremost about its function. This means there is a lightness to the pieces – the legs are long and straight, the arms unburdened by swathes of material, the ornamentation minimal, if, indeed, there is any.

And that, for me, is why its appeal has endured. It works in small spaces as many of the pieces are small and you can see the light around and through them. It works against the ornate Victorian architecture that many of us live in. But it’s just as happy in a modern house too where it will fit in and bring a simple elegance to a space.

It was also well-made so it has lasted all this time. And while the original vintage pieces are harder to find and expensive when you do, many of them are still in production from the first time around. Since it was made from wood you can mend it too as there are no plastic mouldings to bend and twist. 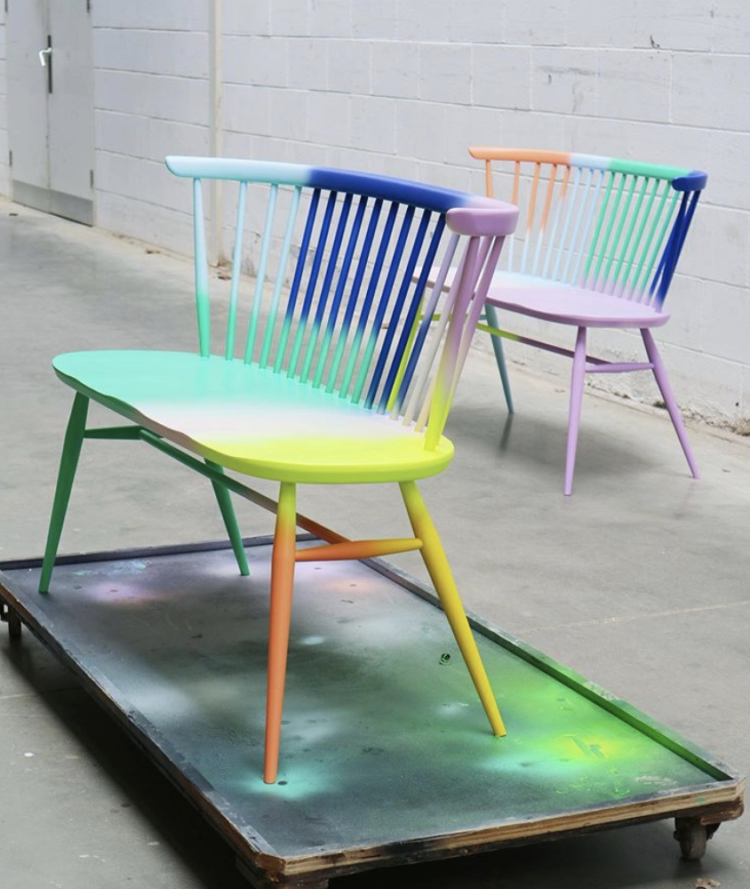 ercol for pride with 2lg

It is, as Sophie says, furniture that looks both forward and back and many of today’s designers are inspired by that style today. For that reason, rather than buying a Chinese-made copy I would look to a new designer making an original piece that has been inspired by mid-century modern.

If you want to buy original upcycled pieces try Jay Blades (who we are trying to get on the show but he’s incredibly busy with his television shows) and, of course the British company Ercol, who have stayed relevant by collaborating with many modern designers including 2LG studio, with whom they worked on this bench for Pride recently.

Fans of the style should also buy the book by Mini Moderns, who make gorgeous mid-century inspired wallpaper, bedding and homewares and whose book, Mid-Century Modern Living, the Mini Moderns guide to pattern and style, is full of gorgeous pictures, perfect cocktails, playlists and how to create your own take on this style. We also spoke about sustainability and my Do Less Harm campaign. Sophie admitted to a feeling of overwhelm at times but we agreed that while it should be big businesses leading the way they aren’t going to do anything until a critical mass of us force them into action. Apparently you need 3.5 per cent of a population to come together and be officially recognised as a movement that has to be taken notice of. So keep asking questions of brands, keep taking those small steps and doing what you can and email me to tell me about companies I should know about for the directory on [email protected] and please put #dolessharm in the subject header.

Finally we discussed garden updates as the sun has finally put in an appearance. Sophie spoke about the amazing treehouse her husband is building and I mused on the importance of making sure your garden furniture is as comfortable as your indoor stuff. Otherwise you just don’t want to sit there. We also mentioned the brilliant Chelsea of @thehousethatblackbuilt who is building a wonderful pergola – my dream garden addition. It’s not finished yet but she is charting the progress on her instagram stories if you want to follow her – and you should her house is gorgeous too. She is also using the Everscape tile range from our sponsor Topps. But we were both in awe of Hayley Stuart who has transformed her concrete paving stones with a stencil and a tin of masonry paint. How amazing is this? You can see the before and after and I need add nothing to this before and after shots. There are more on her instagram feed. So it just remains for me to thank our new sponsors Topps Tiles and to say that episode 2 will be here in two weeks.