Now for all I say that you shouldn’t follow trends slavishly – but only if you like them, it’s still interesting to see what’s out there. Last week the trade juggernaut rolled into Paris for Maison et Objet, having already been in Cologne and Stockholm the weeks before.  It’s not so much of a trend forecaster as a showcase of what will actually be in the shops come September and a chance for the buyers to choose what they think will sell and order it. So what did we see? Well, in some ways you could regard it as more of the same. In others it was more that all that talk of trends and forecasts and predictions were actually landing in 3D with a price tag attached. I shall start first with the stand at Ligne Roset because a) I travelled to the show with them and that’s polite and b) they actually embodied so much of what we have been talking about recently – namely curves, bouclé, pink and green – or rather – salmon and mint to be more modern about it as well as  fluted glass, corduroy and cane and coloured marble. I shall ask you in advance to excuse the pictures as I was rushing round the show snapping away with my phone. First up the SHAPES. And it was still all about the curve. These were everywhere from sofas, to chairs, which are also part of the so-called fat furniture movement. It’s about being comfortable in your home. The cushions are round, the tables are round and there are circles everywhere you look. These curves came from the Art Deco of the 1920s and 30s but have now become softer and fatter and less of a scallop we have seen previously. One point to note is that you won’t all want to rush out a buy a curvy sofa for fear of it going out of fashion but it will be around for a while. These things take longer to come to the mainstream than you might think and, given the costs, they stick around for longer than a pair of shoes too. That said, if you don’t think it’s for you then rather than buying a sofa look instead for cushions and vases and side tables – smaller accessories. There were lots of round cushions about. dark wood, round tables, marble tops and pink walls are the new looks for 2020

In addition to all the curves there were the TEXTILES. New to Ligne Roset this year is a stretch velvet, perfect for upholstering all those curves. And, of course, there was lots of velvet everywhere – that hasn’t changed. But also bouclé is coming up first. Last year we saw it mostly in cream and off white but this year it was appearing in pink – salmon – as well as green. And then there was corduroy. This has been one of those fabrics that the trends keep predicting but no-one is actually producing. This has been partly down to sourcing and manufacturing issues – one sofa company told me he has yet to find a cord that meets his standards – but the signs are this is being resolved now and I would expect to see a lot more of it towards the end of the year. Moving on from soft furnishings to MATERIALS. Yes there was lots of wood but it was often dark/walnut wood colour (rather than the pale of oak of previous years) which goes beautifully with all the pinks. There was lots of cane still around in cupboard doors and rattan chairs. Rushing past the outdoor living section and much of the furniture appeared to be made from woven cord rather than the plastic weatherproof rattan of previous years. I wonder if that’s because there is a now a fashion for more natural materials so the cane has moved indoors in its original colour and the garden furniture has moved on to metal and woven materials. 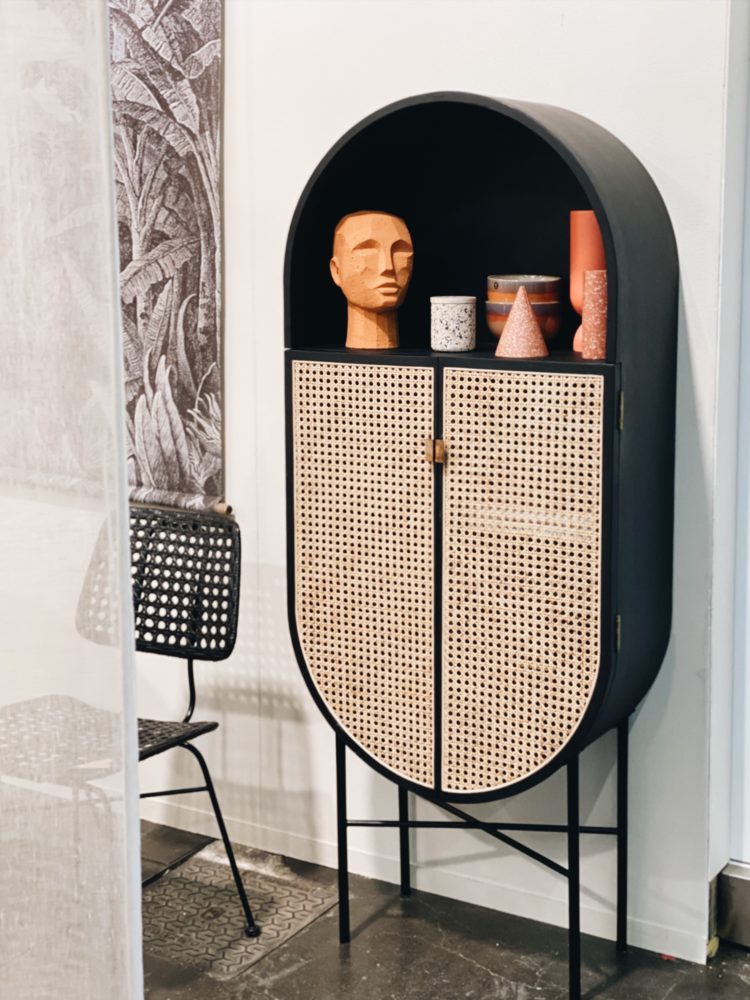 curves and cane by hk living

There’s always lots of marble but this year I saw very little of the grey Carrara version. This time it was chocolate and green; again something the magazines have been talking about for a couple of years but which appears to be reaching the tipping point this year. Lots of cork, which nods to the sustainability movement which is really growing in strength. And finally, glass. Lots and lots of reeded or fluted glass. It was on tables, cabinets, glasses and vases. If it’s glass flute it seemed to be the consensus. Again, this is great in kitchens as it gives you a sense of the open plan shelving but keeps the dust off and means you can’t see everything which many people don’t like. And now for the COLOURS. There was a lot of mint. A lot. And green in all shades – olive, forest too. Pink is still very strong but it’s deepening into the aforementioned salmon, terracotta and plum. I felt that there was lots of chocolate but didn’t get any pictures to back that up so maybe it was in the wood and the marble rather than the fabric. There was almost no blue – some navy but nothing else. Teal and orange were also strong with splashes of warm yellow/gold and a hint of lavender, which I suspect will grow stronger next year. What there was not was grey. Last year it was still hanging on mostly in the garden furniture but this year it has gone from there too. All said it’s a wonderful palette of rich, warm colours which have been growing in popularity over the last few years and look set to stay around. pink and green and curves at maison 2020

Now I should point out that the show is huge – there are seven huge halls ranging from gifts, to kids via cookery, homes and lighting and I saw only a fraction. I can also report – from careful monitoring of what other people saw that there was lots of clever use of recycled materials and innovative use of waste materials. This is just a snapshot of what will be happening in our living rooms come September. And all these reports come with a note of caution. That is what I saw. In abundance. But talking to a writer from Elle Decoration later that day and she reported stripes all over. I didn’t see any. So the message, as ever, is anything goes and as long as you choose colours and fabrics that are true to you and your story you won’t go wrong. Now pass me that curved, cream boucle sofa and move the cat out of the way.