How To Zone An Open Plan Space

How to zone an open plan space is something we have talked a lot about in the Friday Househunter posts but I thought it would be good to dedicate a proper post to it. Not all of us live in airy loft spaces where we need to create small spaces out of one large one but these ideas can also work on a smaller scale in studio flats and bedsits as well as the classic knock-through double reception room found in so many Victorian homes. use rugs to zone an open plan space via alexanderwhite.se

The architect Frank Lloyd Wright was one of the first to advocate open plan living and his ideas were based around the idea of the kitchen as a central hub with the other spaces leading off it. The idea, says Norbert Schoenauer, in his book, 6,000 Years of Housing, was that the housewife (for that it is who it was back then) could be more of a hostess in her own home rather than a “kitchen mechanic behind closed doors”.

Which is an interesting and noble idea, although there was, at that time, clearly no notion of a man being a kitchen mechanic in which case, one suspects, the walls may have come down somewhat sooner. Be that as it may, the idea grew in popularity during the sixties. After that in many cities where warehouses were converted into flats and tiny flats were built that didn’t have enough windows to allow for separate rooms, more and more people began to live in one big space rather than a series of small ones.

In the UK, where many people lived in small, dark Victorian houses, it was seen as liberating to pull down the walls and open up their homes to the light and shared living. Children were no longer banished to the nursery, but instead were fully-functioning family members whose parents wanted to keep an eye on them and possibly even talk to them from time to time. Imagine! Although given that I have teenage sons who are prone to the odd bout of hormonal fury I have sometimes found it easier to hide in the bedroom and communicate by text. Especially when they are both yelling at me that the other is in the wrong and I don’t want to get in the middle. You see walls – really good idea. Because this idea of open plan living is all very well if you live alone. Or in a couple. It works, up to a point, when children are small and leave you alone in the evenings to go to bed. It all starts to go wrong when they want to hang out downstairs and listen to their own music, or watch their own television programmes. That is the point at which many despairing parents wish the walls could go back up.

Whether you happily share your space or wish you had a little more separation there are ways to achieve the zoning of an open plan space without having to call the builders in. use furniture as the room dividers via the modern house

It’s called broken-plan and it’s the 21st century version of the old open plan. Put simply it has all the benefits – the flow of light, the open spaces, the shared living, but it’s about zoning one large space into small areas for different activities and moods. It’s like living in rooms without walls.

First you need to decide what the different areas are that you need to accommodate. Most commonly that will be a kitchen, a dining area and a living/relaxing area. The easiest way to do this is with rugs. Work out how much space you need for your sofa and chairs and buy a rug that sits fully under all of the furniture in that area. By changing the floor you will immediately demarcate that zone. The rug does the job of the walls.  By introducing a new textile – wool instead of wood, for example, you are signalling that that area is different from the ones around it. In this case softer and cosier and signalling relaxation. Think about a tiled floor in the kitchen area and wood throughout the rest of the space – living and dining. The sitting area rug on the wooden floor will differentiate that zone from the dining area, which is, in turn, separated from the kitchen. If you rent, or can’t change the floors, then change the texture of the rugs – wool in the sitting area and raffia, or even recycled plastic, in the dining space and can you put a round one under the table and a rectangle by the sofa? Changing the shapes will also change the zone. So now you have three different floor areas. The next way to divide the space is open shelving. If the space is large enough you can sit a shelving unit with no back on it between two areas. Then put some books facing one way and some the other, add a few ornaments and objets and you have created a low level dividing wall through which the light can flow easily round the room.

You can do the same thing with plants. If you can grow tall ones then make a wall of them. If you have black thumbs use fake ones and if you have small ones then try putting them on a narrow console table to add height. If you are planning a refurbishment or a new kitchen then, if you have space, an island will do the same job as a low-level wall. Add some bar stools and make sure they have their backs to the rest of the room. That is another way to zone a big space – turn your back on parts of it.

So when you have placed your large rug under the sofa, make sure the sofa has its back to the kitchen, or the dining area, or is facing the garden. In an open plan space you will have to put furniture in the middle rather than round the edges and that will help create a notion of separateness. 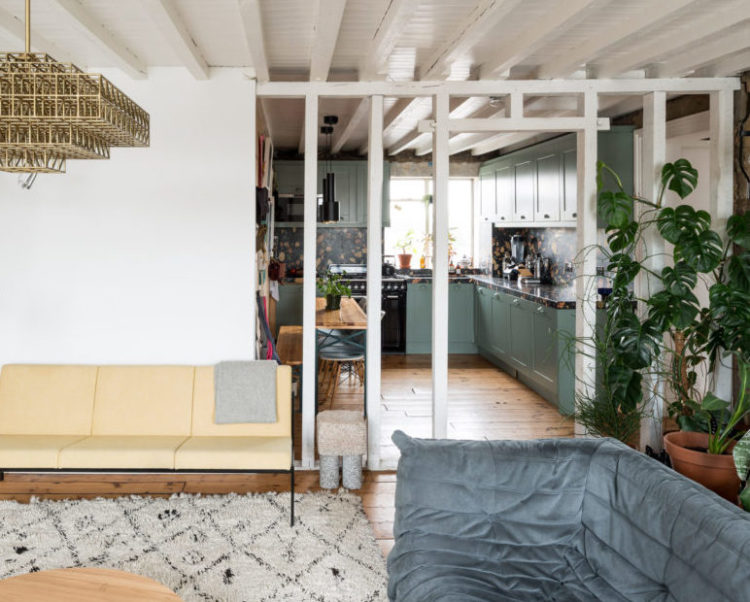 Finally make sure you have different lighting in each area. Don’t feel that a pendant light has to be in the middle of the room. Instead hang it over the dining table. Put downlighters over the kitchen and table and floor lamps in the seating area. This will enable you to zone the space still further.

Now you may live in one large space, but you have created a sense of three separate rooms. And you can do this in a teenager’s bedroom or a studio flat, where you may want to create a desk area, and sitting space that is separate from the bed.

The Househunter: room by room