Created in 1933 by the Finnish designer Alvar Aalto, this quintessentially functional piece of furniture celebrates its 80th anniversary this year. 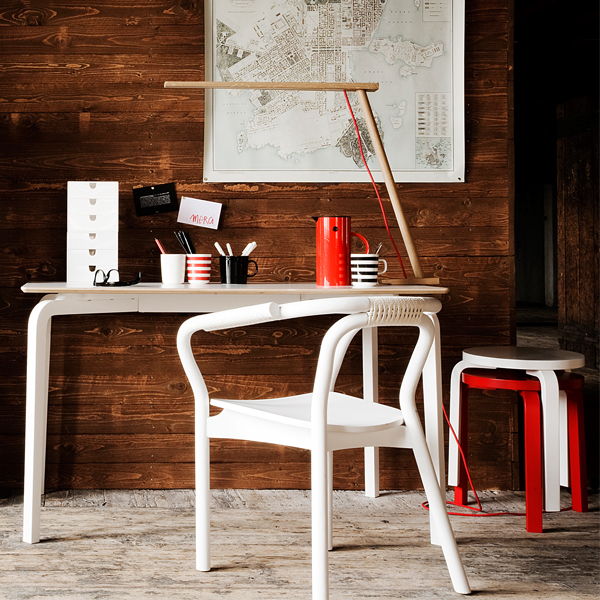 The simple stool, which has become a design classic, is recognisable by its distinctive bent legs and round seat. This style would eventually become the feature of all Aalto furniture. There is also a four legged version. To mark the anniversary, Artek have produced the stool in a range of new Anniversary Edition colours, including orange, grey and yellow. They have also collaborated with designers to create some special edition versions. one of the special anniversary range Artek stools

The 1930s marked a breakthrough for Alvar Aalto both as an architect and a designer. The simple, stackable and durable wooden stool represented a new approach to furniture design, and a continuation of the brand of modernism initiated by Bauhaus. The colours of the Stool 60 Anniversary Edition are taken directly from Aalto’s Paimio Sanatorium (1929–1933): the yellow of the floors, the green of the walls, the turquoise of the handrails and walls, and the orange, white and black of the furniture. The Paimio Sanatorium is considered to be the most important functionalist building by Aalto.

The first of new Special Edition Stools is by the German designer Mike Meiré who said: “I believe you should only change classics when people have become very familiar with them. Suddenly, they can rediscover something they already know. This kind of surprise creates a moment of newness.

“Three legs circling around a round seat – the stool is in permanent movement. Therefore I decided to create a little disorder within this structure by giving each leg its own colour. When moving around the stool, it constantly reveals new perspectives. Like when the day develop from morning to evening, our emotions change accordingly too.”

Special Edition by Mike Meiré  is available in 6 colour combinations for £195.00 each

To buy these and see more designs visit The Lollipop Shoppe

And if you prefer your classic stool with a little padding then how about this? New York-based textiles designer Judy Ross has collaborated with Artek to produce this limited edition version. Available from Saffron Interior Arts for £1,000. Nine of the best … stools

Five Finds: The Best of February’s Objects Of Design