It started when my friend Annabel Bird, owner of lifestyle store Bleakhouse, said she needed some new shelving. She wanted, she said, shelves like Agatha Christie had in her study. She didn’t, she said, want to spend a fortune having them built in. What, she asked, did I suggest? Now my shelves are all built in. They are made from MDF and painted and filled and it was a big job but they do look good and I don’t plan on moving any time soon so they work for me. But lots of you live in rented accommodation or want the flexbility of being able to move things around so buying modular shelving is a better option. So today I thought I would show you five of the best shelving units. The first is the Ikea Kallax as modelled by Annabel’s very handsome dog Edward Lear. Now many of you will be familiar with the Billy  – we used it for the boys’ toy storage for years – but Kallax is deeper and sturdier. It’s also lower so you can arrange things on top and let it double up as a sideboard. This one that Annabel bought can be stood either vertically or horizontally and you can buy boxes and baskets to put in the spaces so it’s great if you work at a table in the sitting room and want to hide papers and work stuff at the end of the day. You can also buy castors if you want to wheel it around and, if you have an open plan space, Kallax can double up as a room divider. It’s fantastic value for money. It comes in either single boxes, pairs, fours, sixes etc so you can build out to the size you want. Now we’re going to go from the bottom of the budget to the top and then we can arrive somewhere in the middle. Hopefully. The Royal System, of dk3 as it is more commonly known was invented in Denmark in 1948. It is designed to be  fixed to the wall to free up floor space and make rooms look larger and lighter. But be warned; it’s earbleedingly expensive so only click the link if you think you might want it because once you’ve seen it you can’t un-see it and you might be ruined for anything else. It is beautiful isn’t it? 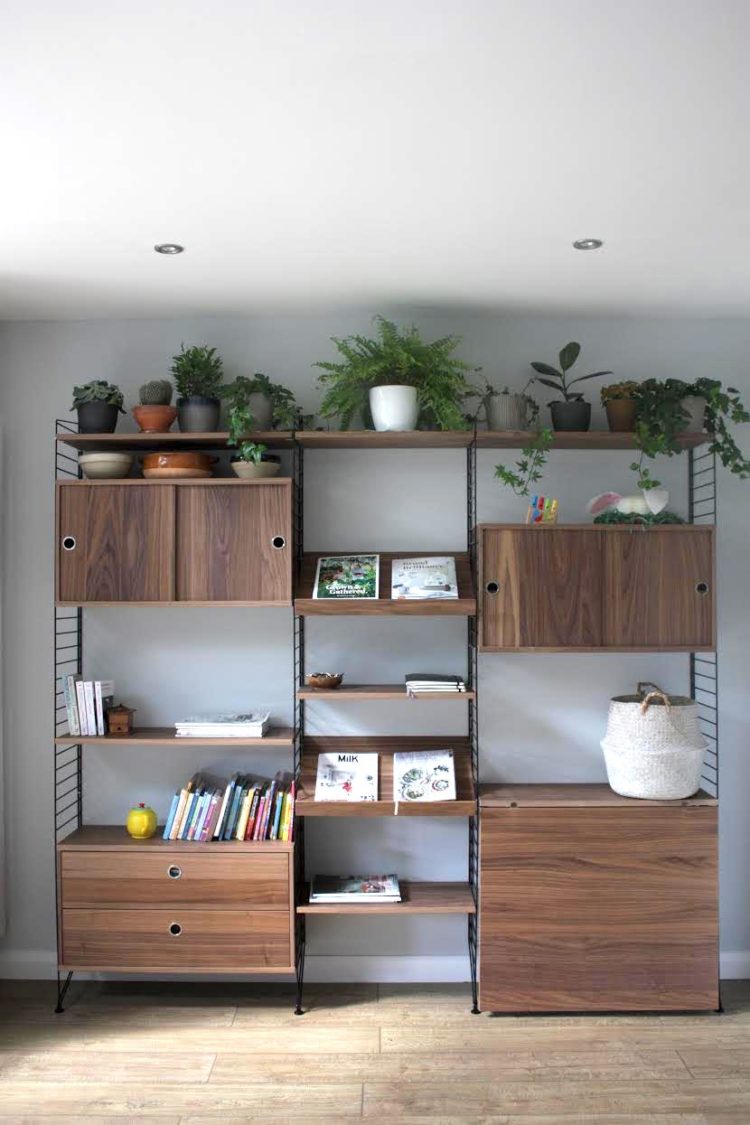 Next up The String system which was designed in 1949 by Nils Strinning. It can be extended in all directions and added to as and when you need. Then it’s easy to take down and move so while it’s an investment – a side panel is £43 and a shelf is £81 – is it a system that you can use for ever. In addition to bookshelves you can also add cabinets with sliding doors, display units and even a desk. You will see that in comparison to the Royal System it a) sits on the floor and b) is significantly cheaper. 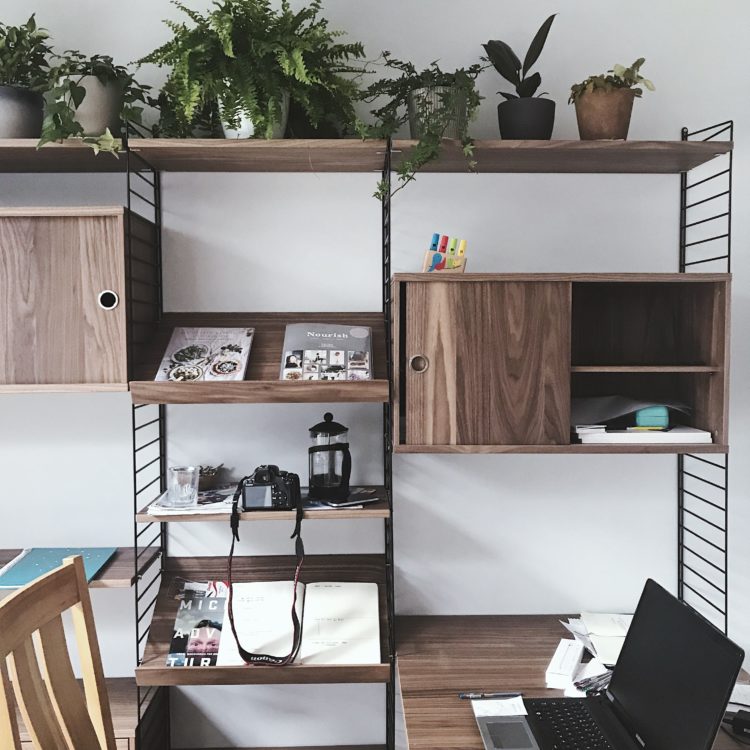 string shelves in the home of Nathalie Aubry

This is one example of it in the home of chef Nathalie Aubry, who paid around £2000 for her set up but you can see it fills a whole wall and includes a desk, shelving, cupboards and display units. Building something similar bespoke would cost a lot more. Nathalie also chose American walnut which is a more expensive finish.

“Our house is open plan downstairs and since having the extension done we knew we had one wall for my office (I work from home). But we didn’t want to lose any space either physically or visually. String is very narrow but it’s also very light with the ladder supports so you can still see the wall.

“Then I needed a table to work on as well as hidden storage – for all the stuff that used to sit on the kitchen counter – and open storage for props and kids’ books etc.” string shelves in the home of Nathalie Aubry

Now we’ll leave those two top end shelving systems there, although there is of course 606 Universal Shelving System by Vitsoe to complete the triumvirate. Designed by Dieter Rams in 1960 it’s minimal and sleek and comparatively expensive. But, say Vitsoe, you can start with a simple shelf and add to it over a lifetime. It also inspires passionate devotion among fans who say they would never having anything else. Muuto has come up with the stacked storage system which is a series of MDF boxes which can be arranged however you wish whether it’s as a sideboard or a sidetable, a wall-mounted bookcase or whatever you need. You can either design your own or choose one of their “solutions” of which there are 10 and a choice of clips or legs depending on how you want to put it altogether. The result can be an orderly grid system or a random selection of boxes spreading over the wall – you choose. Boxes start at £89 and go up from there depending on which of the three sizes you want and if you want a backboard or a door. All three shelving units mentioned so far are available at Skandium so if you live in London you can go in and have a look. Finally the German Cubit system is a really clever idea that is easy to assemble and reassemble and grows as you require. It’s a bit like the Muuto but cheaper – a CD shelf is £26 and with more variety of shapes – 34. There is also a greater variety of colours with 22 shades available. There are also some very imaginative options on the site which have been preconfigured so you can just buy them off the shelf – as it were. I particularly like the contemporary bookshelf with floating elements which looks as if the top shelves are floating away. If you could find a colour to match your wall – or a shade paler – that could be really stunning. That option is about £1000 but you could, of course, reduce the number of boxes you bought.