Many of you will be familiar with the American interior designer Kelly Wearstler, who has been dubbed the Queen of West Coast style. She has designed homes for Gwen Stefani, Cameron Diaz and Ben Stiller. She has designed fabric and furniture, rugs and tiles all in her signature pared back maximalist style. And if that sounds like an oxymoron think gold, lacquer and marble in fierce geometric shapes with masses of art and sculptural shapes in strong colours. I am very excited to share a few images from her new book Evocative Style with you today. It was published on 1 October and is her first book since 2012. It’s probably best if I let the book blurb speak for itself: “Her ornate interiors are distinctive for layers of bold textures, patterns, and rich colours juxtaposed with lustrous surfaces… a whimsical and elegant look that has been called mod baroque. Wearstler shares her creative world, profiling in detail her latest residential and commercial designs (several previously unpublished) as well as her creative process.” A PAIR OF UTRECHT CHAIRS BY DUTCH ARCHITECT GERRIT RIETVELD IN THE POWDER ROOM VESTIBULE; THEY HAVE BEEN UPHOLSTERED IN KELLY’S GEOMETRIC “DISTRICT” FABRIC.

Now this is definitely a coffee table picture book. It’s not that wordy and I’m not sure you will entirely learn how she does it – why would she give that away? But you could definitely lose a few hours poring over the pictures. I was only allowed to publish six of them (and the cover) so this is a very small glimpse of what’s inside.

What you will take away is a sense of vintage pieces that have been re-upholstered or brought up to date in modern colours and finishes. It’s all about the shapes and the materials in Kelly’s world and while she’s not afraid of colour she’s also very happy with a white wall. I’m sure most of us don’t live in houses like Kelly’s (pictured above and below) which she and her husband bought from Cubby Broccoli and which has had only four owners, including the actress Carole Lombard, but you can, nonetheless, get a sense of her style from it.

The colour palette is simple but it’s all about the shapes – from angular chairs to geometric artwork. Where there are curves – see the furniture below – it’s covered in lines or stripes. The curved chairs below are covered in plain corduroy while the sofa has a more obvious stripe. 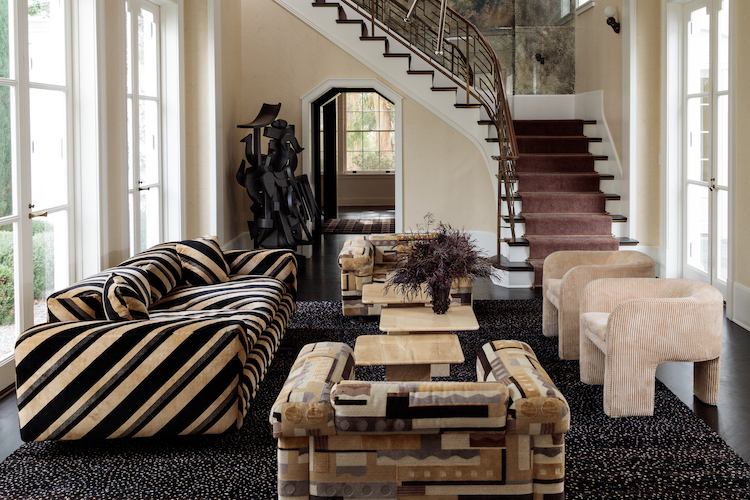 More geometric lines below although in softer colours this time. Kelly does do colour and she does do pastels but her  overall aesthetic is strong. This is what you can recreate from her style even if you can’t recreate her budget.

As Kelly says of this home below: “There are interiors that inspire the minute they are presented as a blank canvas, and others where more imagination is required to see through a maze of imperfections and recognise a space’s ultimate potential. “While the results might suggest otherwise, this home, in its former incarnation, was the latter: a California bungalow, complete with brown ceiling beams and stark white walls that had been renovated and expanded into a sprawling modern home with an open but oddly fragmented floor plan. Creating a cohesive space began with paring down the unseemly details that had been added by previous owners, and adding subtle but significant architectural elements that were more authentic to the style of the home.” A 1950S ITALIAN CABINET COVERED IN WHITE AND GOLD MOSAIC TILES THE LIVING ROOM. THE SOFA AND CHAIRS ARE CUSTOM DESIGNS.

Good to know she’s not the only one that has to start with an uninspiring mess then.

This last image is of the Villon restaurant in the San Francisco Proper hotel. It was named after Jacques Villon, a French artist who was the brother of Marcel Duchamp. Villon was considered one of the most exceptional printmakers of his time and became known for his Cubist works featuring interlocking and overlapping geometric shapes, which inspired the restaurant’s decor, says Kelly in the book. I’m sorry I can’t show you more but this is a book I love. Usually I’m more of a reader than a flicker and while I would have loved more words to get stuck into and learn more I could also pore over these images for ages absorbing all the details. Beautiful Rooms: A splash of green