And here we are again. Last week just flew by and carried off the remains of the summer with it I fear. Autumn is here and the Mad Husband and I are in our annual stand off about when to put the heating on. I say October and put another jumper on and he says he’s a grown-up and wants to be warm. For now we have compromised and are lighting the fire instead. But, don’t tell him, I think I’m about to cave. As I write the sky is dark and overcast, the wind is lashing the house and the rain is intermittent.

All the more reason to admire this gorgeous bedroom as the first of this week’s 10 Beautiful Rooms. You know I love an internal window and this has been construted to separate this room from the living room – proving that you don’t have to have lots of space to create beautiful interiors.

But you do need to think about how to use the space to get the most out of it. Sticking with clever ideas how about a gold ceiling? This room is very restful and grown-up at ground level and then you look up. I wish I could do this. I wish The Mad Husband would go for it. Unfortunately after ceilinggate – when I painted it dark grey and he hated it (and I mean hated) I think it’s unlikely that there will be any flourishes like that again. Anyone who does it let me know. 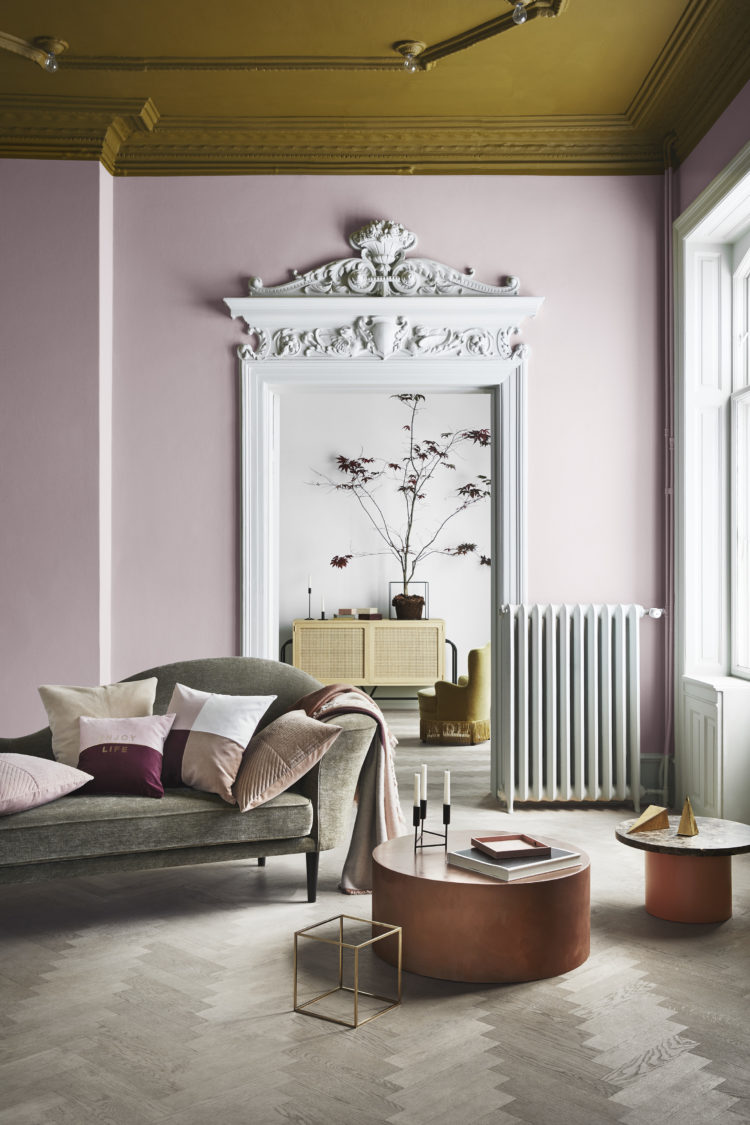 Now I know everyone’s banging on about how grey is over and it’s time for new colours and I’m not entirely averse to that. I have also begun to entertain the possibility of a different palette, whether you chose grey or not there’s no question that it is the perfect pale neutral. Find the right shade and it just goes with everything and sort of enhances whatever colour you put with it. It’s the squeeze of lemon on the grilled lamb, the parmesan on the pasta.

This room, which is quite a cool grey is completely warmed up by the presence of the orange cushions and the little navy blue hint at the back. But it would be so easy to change the look of the whole space by swapping the orange of pink or green. Or painting the bedside table orange to echo the pillows. It’s the perfect blank canvas. Staying with warm colours – there’s a definite soft yellow/gold theme going on so far – this hotel room in Paris is the perfect marriage of a neutral background with its parquet floors and white walls but the navy blue floor length curtains (there is no other length to have and I don’t care about your radiators) and gold velvet makes for a warm and elegant space. The Hoxton Hotel in Paris

Time for a few kitchens now and teal is definitely coming to a wall or cushion near you soon. It’s on every press release I have received by post over the last few weeks and it’s part of the new luxury trend that is gathering pace. It seems that the worse it gets out there the more we embrace warmth and luxury in our own homes. Makes sense if you think about it and teal is one of the strongest jewel tones to make an appearance so far this year.

The Upminster Kitchen by Devol

Of course that might be a bit much for a kitchen so the other trend that is gathering pace is the fashion for dark neturals. This won’t be a fad, just something that, as we get braver and more confident in our design choices, so it will be completely normal to paint some rooms dark because they will look better that way. This kitchen is, for me, gorgeous, but if it felt a bit much you could have dark cupboards and pale walls or vice versa. And remember, when it comes to planning a kitchen, the colour is the easiest bit to change. Worktops and layout not so much. But, as I said, some rooms are better pale and this is a good example. Like the kitchen above the walls and cupboards are all the same which makes for a calmer space as the eye is rushing about trying to take in all the different angles and shapes. It’s been painted in a lovely pale green which is more unusual – shall we say less boring – than white. Not that I’ve got anything against white as long as you warm it up with lots of different textures and wood. And now for something completely different, which is this bathroom in The Hotel Liberty in Offenburg in Germany. It’s pretty unlikely that we are going to recreate something like this in our own homes but I include it because I am asked on an almost weekly basis, where I find my inspiration and hotel rooms and restaurant loos are two of the most common.

This is because the former often have to squeeze a lot into a small space and often do so imaginatively, and the latter are often brave with colour and design so it can be a great place to get some ideas for your own homes. Lastly, these two rooms both have stunning panelling and are included just so we can admire – for that is also the purpose of this feature. But above, note how the pale pink roses just warm it up and provide a focal point. A bit like the black pillow in the picture above – sometimes you just need a tiny splash of something else in a scheme to bring it all together.

And below – is that a teal velvet sofa I spy? It’s coming people it’s coming. You and I might pair it with soft greys and natural wood. The adventurous will be mixing it with burnt orange in a nod to the 70s which are returning. You didn’t think you were wearing platform boots and being told to buy corduroy trousers in isolation did you. It’s all part of a bigger trend pattern that circles around us all the time before spinning off into the distance and ushering in the return of a new decade. I’m not keen on the eighties coming back but then again I said that about the 1970s and I’m quite looking forward to seeing those warm colours reinterpreted for a new century. What do you think?

Speakers To Match The Decor