10 Beautiful Rooms: The Truth About Trends

Trends are funny things. On the one hand we are all telling ourselves not to follow them and that they don’t matter and we should buy only what we like so we will love it forever. And I utterly stick by that for the more gimmicky end of the spectrum – the flamingos, pineapples and cacti (and watch out for alpacas soon) but when it comes to colours it’s a little more invidious. 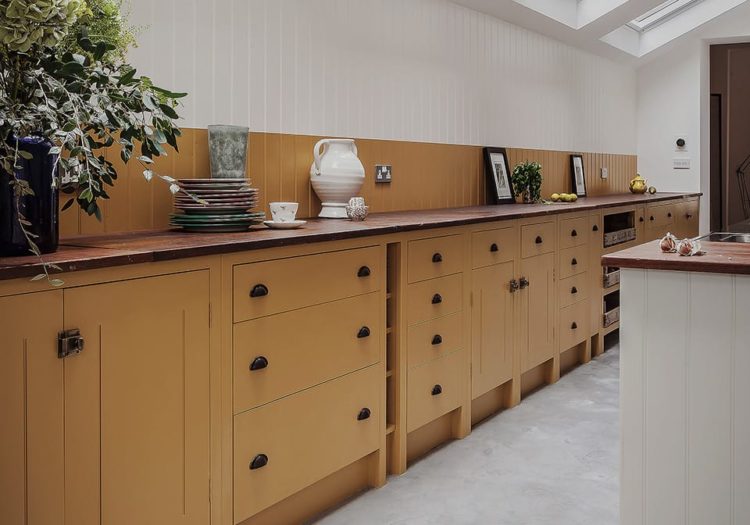 Logo trends – if we can all the animals and patterns that appear from nowhere and disappear as fast – are more obviously fads. But when it comes to colours the transition is so slow that our acceptance of them becomes almost subliminal. Take this mustardy shade above.

Now I’m definitely not ready for a kitchen this shade, but I adore looking at this picture. And what’s more I’ve just come from a little Sunday fashion browsing and I can tell you that this colour is all over the new collections. Now it’s a colour that does nothing for my skin tone so while I may adopt something for my lower half, I won’t be buying any tops in it. And I suspect that that is why it won’t be appearing in my house any time soon. Or will it? The interior trend predictors have been talking about green for ages. So long that if you follow these things you’d think it was done. And yet I think it’s only just begun. I have just painted my bedroom green. I’m seeing more and more green kitchens. The ubiquitous navy blue kitchen may now have passed into the realms of classic rather than fashion and I think we will see fewer of them. That is to say, it will be so quietly classic that it won’t be posted as much. Like grey walls. That doesn’t mean that people won’t still be choosing it. And that is the real reason why you shouldn’t worry about trends. Because it has only 50 per cent to do with fashion and 50 per cent to do with what the magazines want to write about – which is new stuff. When my first book, Shades of Grey, came out the magazines didn’t want to cover it because they felt they had been writing about grey being the new neutral for a couple of years. Which they had. So my book didn’t feel new to them.

But in fact, grey was just hitting the mainstream wall. Which is why the media had moved on – and remember I speak as a newspaper journalist of some 25 years – I know how it works. It’s the same with navy blue. It’s no longer newsworthy because we know all about it. Some of you may remember that I designed a largely navy blue collection of furniture for made.com a couple of years ago. It took a long time to come out (it was partly derailed by my cancer treatment) and when it finally did at Christmas 2016 I feared it would bomb because navy was over.

Well I’ve just had my biggest royalty cheque to date for the navy blue chair. Now let’s not get carried away – it’s about 20 chairs, which in a company of that size, isn’t many, but it makes the point – at the time at which the magazines are moving away is when they sense that everyone is on board so they leave. Journalism is contrary like that. the rectory by clare menary

And so it is for the mustard/turmeric/saffron shades that are all over the catwalks at the moment. And where the catwalk starts the cushions will follow.

I took this picture below when I went to visit Love Your Home a few weeks ago. In among the deep blues and greens was this mustard cushion adding a splash of brightness. And here is a picture I took at the Next preview collection. Grey is still strong but this picture is all about the throw. And on the other side of that folding door was a sofa to match.

So this is why you should ignore trends. Because it’s about seeing a colour so much that it becomes normal and acceptable. At which point you start to look at it more favourably than you would ever have imagined. And so you are brainwashed into liking it. And buying it. At which point the media moves on. And you worry that you have missed the trend. But you haven’t. You are just getting round to thinking about some new colours. a/w18 at next official image by madaboutthehouse.com

And don’t forget that some will work for you and some won’t. Because some you will like and some you won’t. And that is the key point to never forget. Don’t buy a colour just because you see it everywhere but because you love it.

And as a case in point I have a sofa in that mustard yellow which came from my mother’s house and I’m about to recover it. Because, as I said at the top – I love looking at pictures of it but it’s not working in my house. At the moment. Come back in two years and I might be about to recover it back again as it were. Take the so-called millennial pink which began as a trend but it’s not going anywhere despite magazines and commenters pretending to yawn when they see it. This Devol pantry is painted in their version of it although it looks more cream here. In real life it’s quite pink. And it’s the next classic. But the media are moving on – in favour of Gen Z yellow as they are trying to call it.

It just means that they are bored with writing about pink and want something new to say. the devol showroom image by madaboutthehouse.com

This is one of the kitchens in the same showroom – it’s a sort of blue green. Still coming, still new enough to write about and not be on everyone’s walls. It’s a very similar colour to the wall of the Love Your Home showroom and The Rectory Hotel above. It’s on the radar but it’s not quite here yet.

See what I mean? Pick what you like and stick to it. That’s the only trend that matters. Yours. the devol showroom image by madaboutthehouse.com

If You Buy One Thing….