This week on the podcast I interview Drew Pritchard, an architectural antiques dealer, on turning his passion into a career both on and off-screen. As the star of TV’s Salvage Hunters, Drew says it’s all about the thrill of the chase rather than the selling of his finds. He shared his tips on shopping for old pieces and didn’t pull any punches when it came to what he finds tasteful. Dubbed the junkyard genius, he claims the title is unfair: “I find beautiful things but it’s often because they have been discarded that they are called junk”.

When I spoke to Drew at his home in Wales he had already spent £15,000 that morning sourcing furniture including a 19th century card table and an 18th century armchair. So what are his tips for picking out great pieces? The things that other people might regard as junk?

“At every car boot sale and junk shop, salvage yard or antique fair there is one gem; one thing that is remarkable that isn’t where it should be. It might have been lost in the hands of someone who didn’t understand it and it the right hands it is amazing but it isn’t junk.”

“Everything goes in cycles: it’s new and exciting and then it’s second hand. Then it’s unfashionable and then it’s unwanted, so it’s junk and it sits there waiting for the right time to become an antique [100 years] and that term is just a question of age, and then it might become desirable. But not all antiques are desirable and that’s the bit you can’t put a finger on  – why is something desirable?

“The two main categories are form and quality but I also like history and patination.” And the skill in recognising those things is, he says, down to having good taste and a good eye. The former, he says you can’t teach, the latter can be honed with practice.

He is, I am beginning to learn, characteristically, dismissive of those who aren’t experts in his field. When I ask about the fashion for brown furniture it is some minutes before he draws breath.

“This so-called brown furniture was out of fashion and now it’s back. And it’s coming back because people like me are pushing it and I have never stopped buying it. It was a term coined by people who don’t know what they are talking about and I’m sorry to be harsh about this,” he says (not actually sounding remotely sorry). Drew Pritchard for Barker and Stonehouse

Between the 1940s and 70s, he explains, the Americans bought all our best antiques (presumably while we were investing in G-plan and mid-century modern furniture by designers such as Robin Day and Ercol) and they hung on to them and all that remained in the UK was a “load of old toot” from after the Second World War.

“The Edwardian to the late 1940s was not a great period for the majority of furniture and that is what was became known as brown furniture, but, what happened was that everything that was old and brown was  tarred with the same brush including 18th and 19th century English furniture – finest on the planet that has ever been.

By which he means people like himself, who was taught by his father, a sign writer, to recognise quality when he saw it.

So why were we (in the UK) so good at furniture making?

“So in the 18th century you have people like Robert Adams and Chippendale championing it [neo-classical) and creating the finest furniture from the finest woods; we owned large parts of the world where these beautiful woods came from so we imported it.”

Despite his knowledge and passion for beautiful furniture, Drew is unsentimental about any of the things he has found. And nor is it about making money.

“I would sell everything in the house  – it is all about the hunt for me. Finding it, recognising it and bringing it back. The selling just gives me the money to carry on doing it.

“I was talking to a dealer friend the other day who said so far this year he has turned over a million quid but he said he hasn’t made any money at all because he just keeps buying more stuff. And that’s what I do. It’s a passion and it [the selling] allows us to keep hunting for more”

So he talks of finding an amazing painted panel in pieces under a table in a tiny shop and a rare table in girls’ school that was used to stack the loo roll,but they are all forgotten about because each great find is blurred out by the next one. 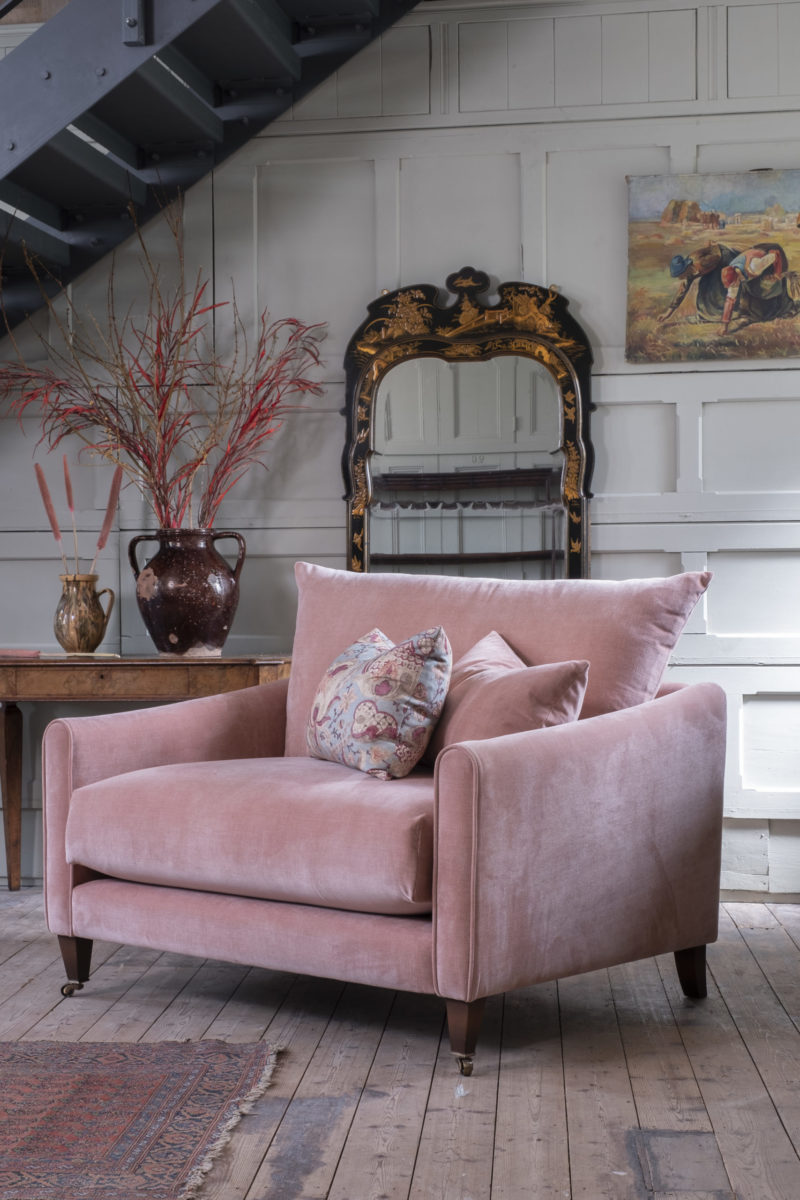 But ask him about modern furniture and his passion appears to tip over into anger: “We have been trained like little lab rats to go to Ikea and buy things … and aren’t they great because they’re shiny lovely people who give you meatballs and sell you something that’s comfortable for five minutes and is instantly worth nothing, whereas you can go and buy yourself a chair at any antique shop or salvage yard or online for the same price or less that will be better and will last you all your life and will be more comfortable and that is more green because recycling’s all right but re-use is better.

“It doesn’t have to be antique or expensive –  one of the most comfortable chairs you can buy is a smokers bow and you can get one for about £45 and they get better with age.”

I did a quick search and I did indeed find some starting at £50 (but I also found some selling for ten times that so I guess you need to know what you are looking for.

“We have been trained to buy new but don’t be afraid of buying old. Break the cycle by buying something with soul. There is a story attached to it and you can find someone to restore it and the love affair starts.”

So what are his tips for buying old? Firstly, if you buy an old light he suggests taking it to the “bloke on the high street who fixes your microwave and your telly. Electrics is three wires, there’s no mystery. Clean it up, take it to him and he will fix it for you.”

What about shopping at antiques fairs? You won’t be surprised to know that Drew has Thoughts:.

“I stood Newark for 13 years and I’m going to say get there early. People start unloading their vans at 4.30am so be there then and bribe the security guard to let you in early.

“Take your measurements, take a tape measure and a pen and paper and take cash, credit card and a cheque book. And dress warm.”

So far so good. Then: “And don’t be a tourist;  you see these ladies turning up at Ardingly at about 9am in a silly hat, expensive coat and wellies and you know ‘everything went four hours ago love’ so –get there early.

“Also be polite. I’ve been up all day loading the van, I’ve driven said crappy, filthy van across the country to the fair. I’ve slept in the van, I’ve unloaded the van and I want £50 for something and you’re trying to offer me £25. Give people their money. Ask once if that’s the best price they can do and then pay it.

“Everyone sees everyone trying to get a bargain on the telly but don’t do that because the next time they won’t be there for you to try and get a cheap price off.  Give them their money you will still be getting something of value.

“Put your hand on it, say you love it,  smile and say you will take it away that day and I guarantee you will get the best price possible.”

Given all this it will come as no surprise to know that trends is something that gets Drew’s “hackles up”.

“I’m not interested in fashion but in style and taste. I detest with every fibre of my being painted furniture . You have some dreary Edwardian sideboard that no-one wanted anyway that you got for for £40 and spent £200 (sic) on chalky paint and paint it badly and make it even more worthless and then all of a sudden you’re a vintage painting expert.

“You’ve taken something that was worthless and made it worth even less. It’s an embarrassment to this country that we do this. Along with pebbledashing.

“It’s thoughtless and dull and nonsensical and if I get shouted down by someone who says they like shabby chic I don’t want to talk to you anyway.”

So I ask if, perhaps it was a “worthless” piece of furniture and it’s made someone happy to paint it so they can keep using it where’s the harm?

“I’d love to be right on about this and PC but no it’s  not ok because you have vandalised your environment and put something tasteless and cheap and nasty into it, and even it wasn’t that way you’ve made it that way and you’re not learning from it and it will go out of this small phase and still be something worthless so you have wasted your money [when you could have gone out and bought] something beautiful.

“The only person getting anything from this is the person who sells you the paint and if it makes you happy then FINE – but as I said stone cladding was in for a while wasn’t it?”

And with that he is off. Back to the thrill of the hunt. That evening he messages me to say he hoped he hadn’t been “too grumpy”.

The pictures are all of Drew’s collection of sofas and chairs in collaboration with Barker and Stonehouse. The Househunter: A Colourful Apartment in Norway

8 Of The Prettiest Bedrooms for National Bed Month