Beautiful Rooms for a Monday

The decorator is IN the building! And we’re off. Well sort of. He has juggled things around to come to us for two weeks (one room hopefully) and will then leave for two or three and come back again until Christmas (another room, hopefully). By then the radiators should be in – which means the upstairs flooring can be done and the upstairs windows installed. Replacing the windows was a curveball we hadn’t expected. We knew the original sashes were tired and in need of restoration but figured we could get away with it for a couple of years. However, when we moved in we realised that not only had they all been painted shut, but many of the cords had either rotted or been cut making them impossible to open. We considered restoration, which costs about half as much as replacement – but isn’t that much less disruptive – and decided that it didn’t make ecological sense to spend a lot of money restoring single glazed windows. So we’ve had to go for full replacement. But that does mean the broken shutters can go, which means we will need to think about privacy. I had already decided that linen panels hemmed to fit would be an elegant and minimal solution. But I hadn’t worked out how to fit them – I got stuck somewhere around velcro and command strips and then the always clever Sophie Rowell, of Cote de Folk, revealed hers on hooks that can be full length or folded, hung at the top, or half way – see the picture above and her instagram here. We also realised that several of the radiators needed moving as they are in the wrong place, are old and inefficient. So they’ve had to go as well. I’m taking my own advice – albeit painfully – of you must get underwear right before you get dressed. There is no point spending money on lovely floors and curtains if the house is cold and draughty as it will be uncomfortable and you will never fully enjoy it. Never underestimate the decorative punch that a painted window frame will give you. While they need to match on the outside they can be different in every room inside so think if you want to match the walls, go dark to draw the eye to the view beyond, or just add a deep saturated colour that fills you with joy.

So this is where we are. That said, we are having cast iron old school style radiators and the original windows are a very pretty shape, which is, of course, being replicated, which means, once the floors are done that we should, all being equal, have a fabulous canvas which will need little more than a coat of paint. Just as well as we need a new kitchen too.

I have been round and round the idea of a banquette. They are great space savers and, as long as they are upholstered and have a back, comfortable too. In the end we have decided to stick with chairs as the table will overlap the glass panels at the side of the French doors, but if you have an alcove a bench is a great idea to create a cosy dining space. One point to note – a pedestal table or one with legs like this will make it easier to slide in and out than the traditional four-legged version. 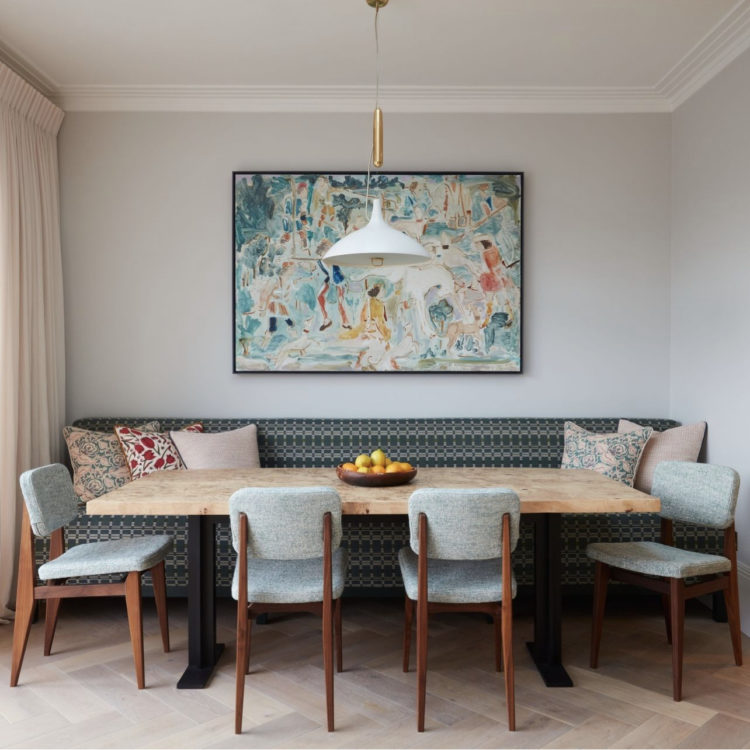 My sample box is filling up and we have decided on light switches and sockets as well. Each room is planned, although the final paint colours have yet to be chosen. I’m still trialling different shades in different rooms at different times of day and understanding how the light flows around the house.

So far we are looking at samples of terracotta and cork, dark wooden flooring and sisal. There is bronze and black, cream and pink, a hint of vintage copper and some anaglypta wallpaper. It’s going to be minimal but rich, textured yet calm. I’m excited for the plans and when I have something to show you, you will, of course be the first to know.

I’m still drinking in the pale and elegant rooms of Rose Uniacke but I think that reflects a need for some calm elegance in my own space rather than a desire to actually go as light as this all over. I always admire it, always think I want it, always add more colour once it’s been done for a few months. That said, a warm neutral is always a good starting point as it allows you to live in a space and work out what you want so you can gradually layer and build up the room. Finally, the chimney sweep comes to check the fireplace this week. The previous owner left a bucket of kindling and a coal scuttle by the fireplace but given the state of the rest of the house we daren’t light a fire until the chimney has been tested and swept. It wouldn’t surprise me in the least if it needs a new liner, which we had to do in the last house but I think that really may fall off the edge as it cost about £1,500 five years ago – so bound to be more now – and the budget hasn’t got enough flex for that at the moment. There is a second fireplace which the surveyor seemed to think was a capped-off gas fire but all will, hopefully, be revealed this week.

The room below is just for inspiration. Although my French doors aren’t a million miles away from this – they will be wooden (this is not a crittal sort of house) – and while there won’t be room for curtains I’m all in favour of plants so this is a vibe rather than an idea if you see the difference. It’s very important when you are deciding on schemes to identify what you actually want to take from a picture that has stopped you in its tracks – is it something concrete like a layout, a style of window or a paint colour or is it just a mood? If the latter you need to work out what it is in the room that is inspiring the mood you have responded to. It takes a little more time but the end result – a room that makes you feel the way you need to feel in there – will be worth it. As always here are a selection of the pictures which have inspired me this week. As I said last week, sometimes it’s about a mood they spark which I, and you, may want to recreate in your own homes. Sometimes it’s a colour or a pattern. Sometimes it’s just about seeing something beautiful which you have no hope of recreating in your own home but which, just for a moment, transports you out of this world. And who doesn’t need a bit of that right now.

For example, I keep looking at bright green kitchens. I’m almost certainly never going to have one which makes this, for a me a mood inspiration image. It’s happy and it’s bold, it’s cool yet comfortable and, super important to me, it’s functional and different from what we see so often. That’s ticking all my boxes even if the colours aren’t ones I would use. What single words would you use to describe the spaces you want to decorate and live in? What Three Words But For Interiors

The Househunter: A flat in Bath