Luke Edward Hall is one of those designers that has seemingly appeared out of nowhere and is, at the same time, everywhere. Some of you will be completely familiar with his colourful designs, his love of Greco-Roman style and pictures of his gorgeous pink and green flat. Others will be wondering who on earth he is. Well, his latest collaboration (following a book launch and collections of cushions, platters, shoes and even boxer shorts) is with the High Street as he has partnered with Habitat. 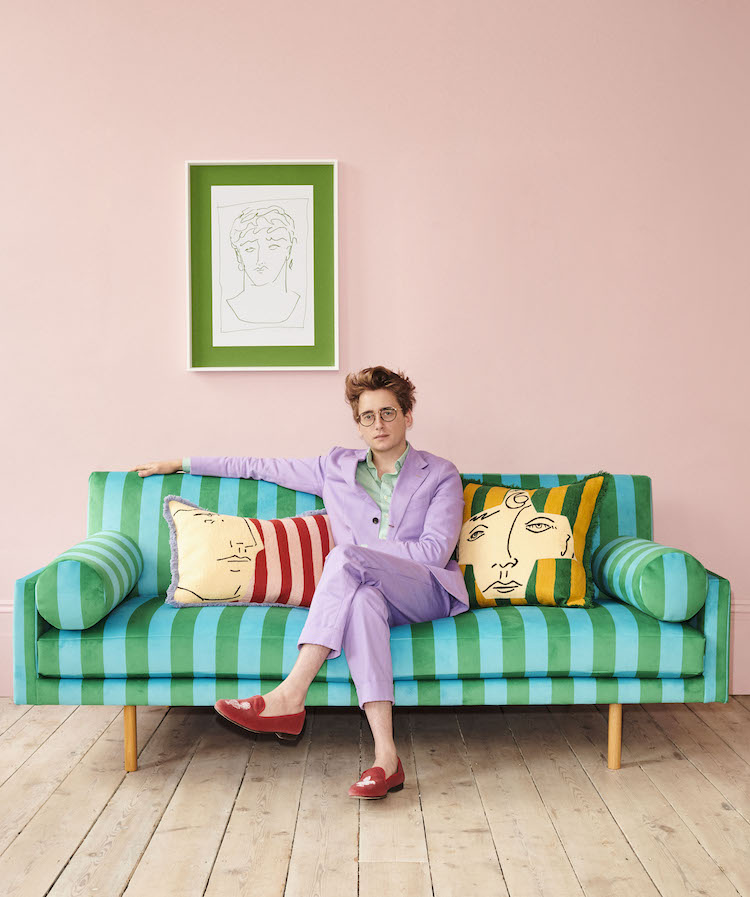 This morning he launched a limited edition range of his signature art, textiles, furniture and lighting and for anyone who has lusted after the lobster cushions in Liberty but been put off by the price, this is definitely a more affordable way to get hold of his style.

There’s no doubt that everyone wants to collaborate at the moment. I wrote last week about both Farrow & Ball and MADE producing collections from, or inspired by, The Natural History Museum. Gwyneth Paltrow and Lenny Kravitz have both partnered with Crate & Barrel in the US to produce furniture collections and hell, even I did a collection with MADE about four years ago.

Spencer sofa in circus velvet, including two bolster cushions, made to order in Italy £1,800

But I think it might have been Habitat who started this particular ball rolling. Remember the VIP collection? Back in 2004 for their 40th anniversary they launched a collection with products by Daft Punk, Carla Bruni (way before she married Sarkozy) and Helena Christensen. And I still have those flower lamps by the way. Anyone else?

This time the collections really are limited though so it’s first come first serve. The store’s previous collabs with Jackson and Levine (dinnerware) sold out within a few hours, their most recent with Quentin Jones (art/textiles)  in a few weeks. So it’s a good way to get hold of a piece of design that will disappear from the shelves quite quickly but will be worth hanging onto for its originality. Or put it another way – to get something limited edition at high street prices.

I spoke to Habitat yesterday and Kate Butler, the head of design, said: “Our collaborations are about surprising people, creating original, stand-out products for the home with upcoming creatives that share our attitude towards contemporary design and pattern.

“Luke’s new collection is colourful, whimsical and divisive – exactly what Habitat as a brand should be and we’re thrilled to add him to our series of collaborators who have each translated their different aesthetics into sell-out interiors collections.” 60s chair reimagined by Luke, made in Italy with oak legs £995

Now that’s all very well, you might say, if you’re a celebrity or an established designer – don’t forget Tom Dixon was first hired as head of Design, then promoted to Creative Director before launching his own studio – but what about those wanting to break into that world? Who might have trained, or be training and who want to break into the industry? Well Habitat has just launched a competition with Living Etc to find new talent and will create their winning design. You can read more about that here and you have until next March to enter. So it’s not just about collaborating with the big names.

But worrabout this collection? I have often championed the idea of a colourful sofa against a plain wall, rather than a sensible sofa against flamboyant wallpaper. This is £1,800 which is a good price for a velvet sofa, and if these are your colours then you should absolutely go for it. I do think it looks better against pale pink than white but it would also work against pale greens and blues if you wanted to tone it all down a little. Think pale blue walls, this sofa and a plain dark green armchair. That’s if you don’t want to go full on maximalist.

Or you might prefer the bedding which is a little more subtle and again you could ramp it up with the emerald green or take it down with a soft blue.

So what do you think? Of the collection? Or this trend for collaborations. Yes we all know it’s a way to raise profiles ad sell products but motive aside do we think it works to make design more democratic or interesting?

Luke said: “I wanted my collection to feel playful, slightly surreal and very romantic, inspired partly by the circus partly by my love of mythology.

“I have reinterpreted several of my favourite motifs in new ways. Faces of imagined characters and long lost statues appear on lamps and fringed cushions, whilst emerald green and sky blue striped velvets adorn a classic Habitat armchair and sofa. It’s been a pleasure bringing my designs to life with such an iconic British company.” Beautiful Rooms: Why a Drop of Black is Always a Good Idea