Is this it then? The 19yo has gone back to university – to his first student/shared house, which, in a marvellous piece of understatement he has acknowledged might not quite be to “your taste”. This means he has vacated my office where he has been parked for much of the summer as a change from his own bedroom. The 17yo has returned to school, having vacated my office at the start of the summer when the school zoom classes ended. And, of course I vacated it at the end of March, partly to make way for them and partly as it rapidly filled with all the stuff from the other rooms as part of that nationwide lockdown declutter which ground to a sudden halt when everyone suddenly realised there was nowhere to take anything as all the tips and charity shops were closed. And so it sat there in bags behind this door while the teenagers climbed over the piles and accessorised them with crockery and half empty glasses. And then over the weekend I cleared it up. And couldn’t quite believe it when I found this prophetic David Shrigley tea towel: Large Fancy Room Filled With Crap. And then digging deeper in the detritus I found an empty frame. So there it sits – still fancy, less filled with crap and, therefore, feeling larger. I will take it to the framers and get it done properly. Or, if I can find the iron, I might remove the creases myself.

But, in all that the one thing that didn’t change throughout the lockdown was the view as you walked past this room. All the stuff was piled up behind the door (which didn’t open as wide as it does here). I have spoken before about the importance of the view as you pass by a room. It’s not just about having a room with a view but the a view of the room is just as important. And this image stopped in my tracks this week. I have featured Lou’s gorgeous house in France before but this wallpaper with the peacocks perfectly visible as you walk by sums it up perfectly. You are never decorating a room in isolation – hence the importance of the red thread; the decorative means by which you link the spaces to create a cohesive feel – but as you walk around you peek into other rooms and catch little views and vignettes of what lies inside.

Another perfect example below in this design by Roisin Lafferty. That pink lacquered table just draws you into the space as you walk past and surely wouldn’t fail to cheer you up even if you didn’t have time to go in at the point you were walking past. 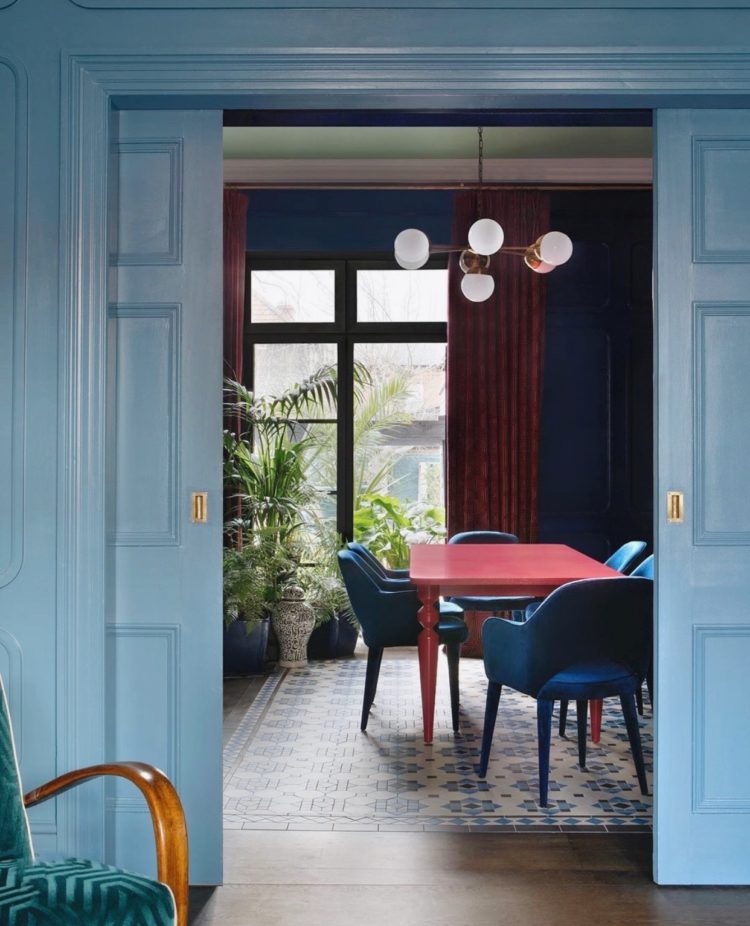 A few years ago I was consulting on a house with a large front room that was being used as a junk room as the family tended to live in the back of the house in the large kitchen dining room where there was also a second sitting room facing the garden and a playroom. We agreed that since the front was basically for Christmas and family gatherings only it could afford to be flamboyant, but it also had to send a message. A message when you walked past it after a day a work or a wet afternoon in the park, that it was an inviting space that would soothe the day away. And in that way it became an invitation and a welcome to the rest of the house. And so we turned it into a grown up sitting room where they could do after the kids were in bed for a glass of wine in a beautiful space with no Lego to trip over and no piles of paper that needed dealing with. But it doesn’t have to be the object in the room that draws you in. You can also, as Melanie Lissack has done here, frame the view by painting the architrave of the door. This instantly creates a view and highlights the room beyond (one of the prettiest bathrooms on instagram if you ask me). The wall is white but the soft pink door frame and door elevates the whole space in a way that traditional white woodwork would not. You don’t have to use dark paint but a touch of colour – particularly if it links to a colour in the room it leads to – is a simple touch that delivers so much more than you might think. So whether it’s a picture, the wallpaper, the furniture or even the entrance to the room, don’t forget to create views all around your house when you are decorating. It will really elevate the space and give you joy every time you walk past.

The Househunter: The Interior Designer’s Home