Well there’s not much to say other than have another glass of water and see if any of these rooms cool you down – it’s only now that I look back over what has caught my eye this week that I notice the predominance of plants and tiles and screens – as if we knew (and we probably did) that the heatwave was coming. woodwork in russell green via benjamin moore design by @hawkes.landing

So let’s start with this pretty room with its woodwork painted in sage green by Benjamin Moore and you can see the impact from painting the window frame as well. While white skirting boards are still the default, I hope I have shown you enough examples of why matching them to walls works better, but windows still remain white for most of us. I have to admit my own sitting room windows are wimborne white – to match the off-white ceiling and top third of the walls rather than the chocolate brown of the lower part. This is due to laziness rather than a wilful disregard for my own advice and because we can just about get away with it as the windows rise over the picture rail and fall into the off-white territory as well. If we ever redecorate this room I will change them.

The point remains the same however, this room would lose something if the woodwork (and I’m including the window frame) was traditional. The green draws out the wallpaper – and if you’ve spent money on materials surely you want to do what you can to highlight them?- and brings the whole room together in a way that looks considered but not contrived. And in case I haven’t given you enough decorating mantras over the years there’s another and make that the aim. Leaving the sage green and moving to a more emerald or forest shade in this clever kitchen by Barbara Ramani, who some of you may remember from Interior Design Masters and I think we can all agree that she went out far too early. But, as is often the way, those that don’t win these things go on to flourish – perhaps because there is less public pressure. Anyway, I wanted you to see the joins between the plain green of the kitchen and the curtains with the floral pattern between. But I mostly wanted to show you the screen between the two spaces.

Unless you have a very large open plan kitchen diner you might not want to put a wall across. But equally you might want to create some form of separation that won’t block the light or the view. It’s called broken plan and while it can be achieved with a change of flooring and colour, this framework is also so clever. It brings a more architectural divide to the space but it’s not a clunky divide between the two spaces although it allows each one to have it’s own identity. Definitely one to bookmark and if you use it remember to contact Barbara and tell her.

plants indoors and out via historiska hem

This is a house that is for sale via Historiska Hem (definitely one to follow) and I have included two shots this week. Above a simple home office but note how the plants inside are used to draw the eye to the view outside. If your view is of a carpark or a building then just focus on as many plants framing the window as you can manage. Trailing plants (like tradascantia) will happily wind their way round a wire or string so you can train them round the view you want to have. Even the green desk lamp plays its part in this scene and I would also paint the window frame green as well. Given that most of us can’t actually work in the garden (screen glare and heat as much as the practical reasons of where you job might be based) it’s worth trying to bring the best bits of outside in. Showing you the sitting room while we’re here and it’s mostly just for the colour palette – yes it’s probably more autumnal than high summer but that’s my kind of colour scheme and I love it. You could swap the navy books for green (not that I’m suggesting you colour coordinate your books but I’m viewing this very much as a colour scheme rather than a room) and note how the rest is very tonal from the pale pinky walls to the deeper shades on the cushions and the vintage wooden table. The yellow is picked up in more books and the rattan mirror frame which also echoes the design on the cushion. And from there we head into a pink kitchen, which may or may not be a shade that you would consider. But we’re not here for the colour this time. Instead note how the handles (try the holy wafer from Superfront) reflect the light as does the slightly metallic kickboard which makes the cupboards look slightly raised from the floor. But it’s the paper lampshade that’s the thing in here. Something so simple and so sculptural and that is what turns this from a pink kitchen into a kitchen that is pink but is so much more than the sum of its parts. It’s details like this that make a design. 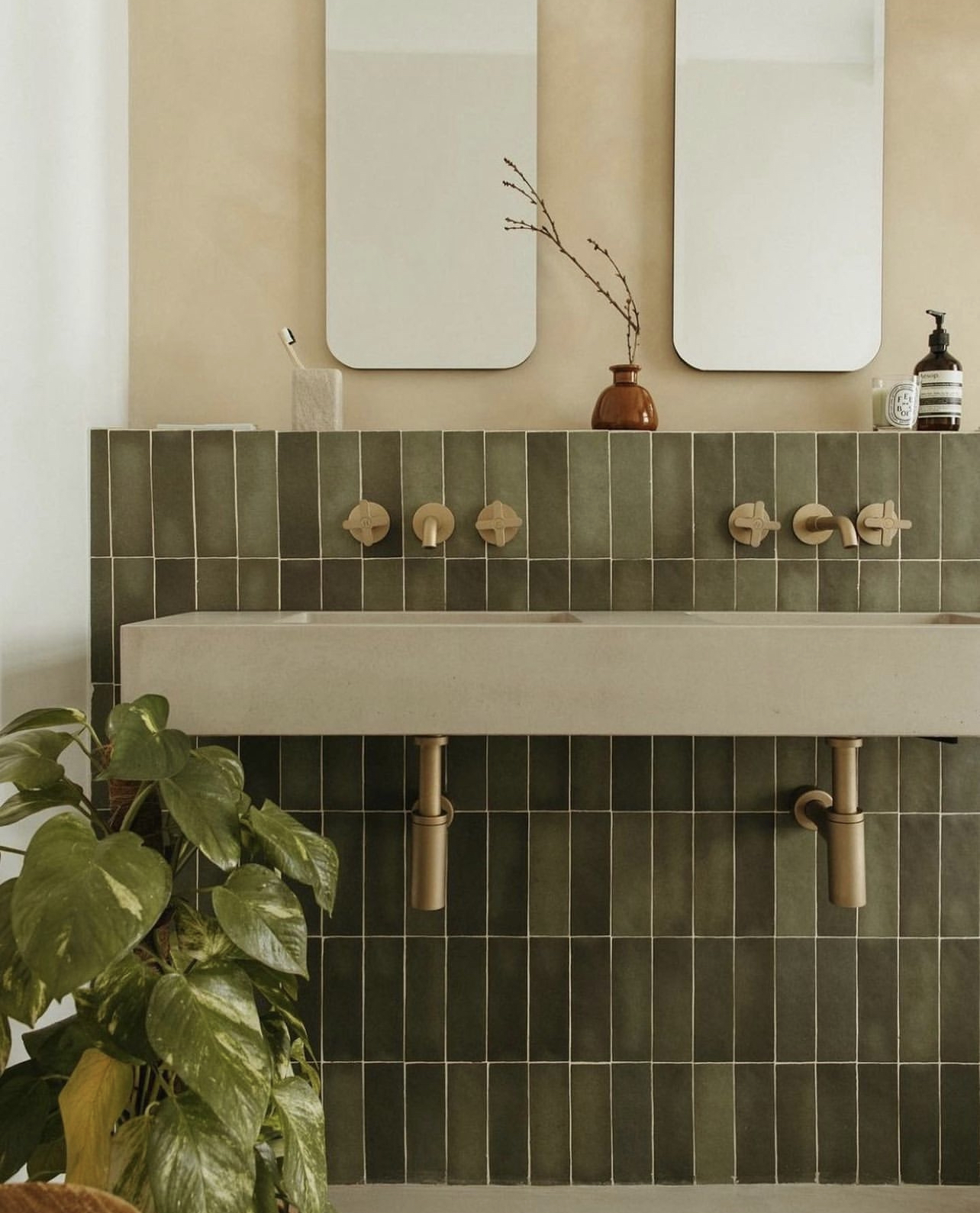 Cooling off with a couple of bathrooms. Above, this time the green is olive and the simple metro tiles are placed vertically making a change from the classic brick. The tall rectangle mirrors emphasise this and all will serve to make the room look taller. But this is about the basin. In the same way that white woodwork is traditional but some designers are looking to move us all on from that so the coloured sanitaryware trend is creeping in. This is concrete and the warm stone colour tones perfectly with the muddy olive green and the muted brass (rather than super shiny).  This is a super modern bathroom for an old house and if you are don’t like, or are bored by that shiny white then consider changing it up.

But will you be brave enough to change it for a retro colour like this mint? The standards look super modern and the combination with the black and cream tiles and cream walls is stunning. I love it, I can already hear a hard No from The Mad Husband although I could probably get a cream past him. Imagine this with pink though… Try Burlington. or brokenbog.com for loos, basins and baths – remember it doesn’t have to match – just buy a loo or a couple of basins rather than the whole suite. check tiles and mint basins via pierce and ward

Who’s going for it?