Last week for the Beautiful Rooms post we spoke about the Red Thread and how you can use it to create a cohesive theme in your house. This week, the houses are all very different and while I’m certain they will all have their own red thread, I am choosing to look at little more at the colour and personality found in each one. zebra wall hanging in the home of @threeboysandapinkbath

Some years ago, when this house was featured in Living Etc, the headline spoke about an element of drama in every room and it is something I have always believed in when decorating; that every room should have one factor that is the one that makes you go Wow. Or the first thing that, having left the room, you would mention to someone else.

Now clearly, it’s the wonderful zebra (from Thrills of the Emporium) that adds the drama above but what is particularly great is that it isn’t just the head. We’ve seen that before; papier mâché heads, wooden heads, taxidermy etc – you name it it’s been around in recent years. But this is almost the full body and so it makes more of a statement, is more unusual and, let’s not forget looks brilliant with the fireplace and matching ceiling. And keeping the rest of the room white was the right thing to allow both elements to stand out. 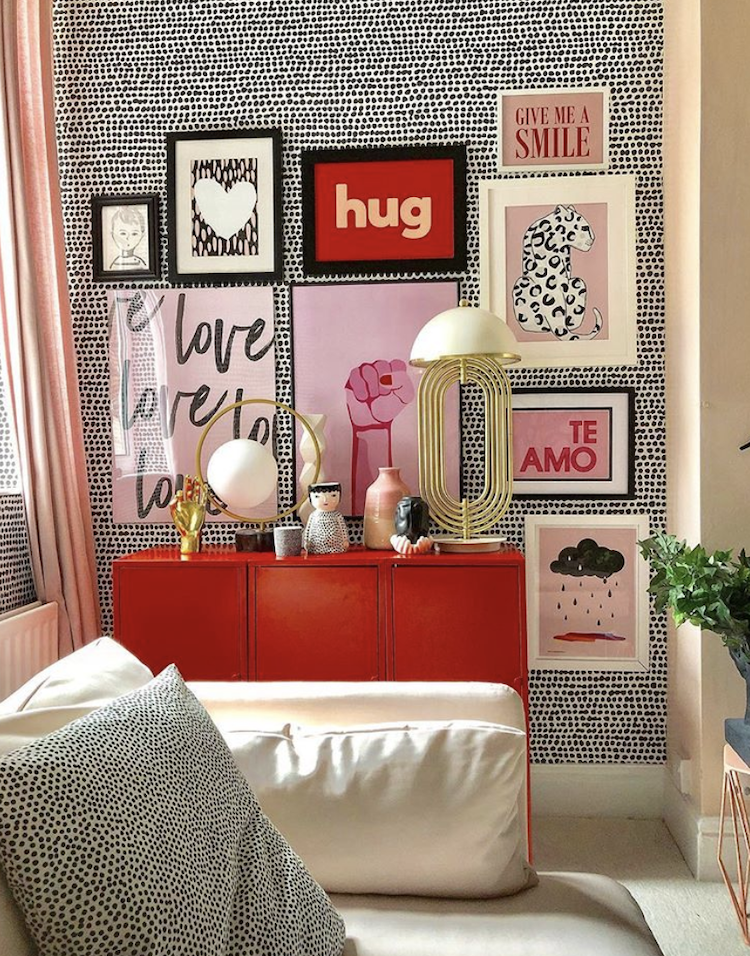 black and white and pink and red by @nudeandthenovice

I did ask The Mad Husband about bringing a zebra in the house. He said I had a gold ceiling… I think I might have to wait until the 18yo goes to university in the autumn and add one to his room when he’s (literally) not looking. I’ll tell him it was a work thing….

Moving on, I know I have said that typography isn’t my thing (although I seem to have a subconscious bias towards the swearing variety) but what I love here is the colour combination. Black and white can be stark but this dotty wallpaper (and matching cushion) is fun. Throw in a mix of pink and red and it’s fun and cheerful without being – to my mind – overwhelmingly colourful. And don’t forget the black and white makes a good background for any colour combination you choose – shades of green and gold being particularly fabulous. And talking of green (I had vague intentions of working my way round the rainbow when I started this post but you’ll see I gave up after blue when my innate colour reticence took over) this bathroom has done exactly that with a black and white base and green tiles for colour. And don’t forget you can paint the sides of these baths so you could bring in added green.

I also happen to know that the designer and former singer Pearl Lowe, has a bath like this which she has covered in neon pink velvet. After all, the outside isn’t the bit that’s supposed to get wet. I spoke on Friday about not painting woodwork white and also using door architraves to frame the view into the next room. Here’s a perfect example. And it also allows the wallpaper on the far wall to pop out as well. If you don’t want to have a strong contrast between a white wall and dark woodwork then using a dark and light version of the same colour might be a more gentle way to acheive this look but one that is no less striking. neutrals and vintage wood by @restoringlandsdowne

And now for all those who have been slightly holding their breath at the explosion of colour. Here are some quieter rooms. Although they still have their features – for me the cupboard is the thing in this bedroom by Restoring Landowne.

But below it’s the sideboard created from an Ikea piece of furniture by the very talented Bianca Hall. I think it involved quite a lot of sawing and swearing but when the houses editor of the afore-mentioned Living Etc visited and “assumed” it was by Jonathan Adler, it was probably all worth it. And here is Bianca’s very clever homemade headboard, which involved more swearing, some very long pieces of wood and some foam padding. This is a very clever way to make a bedroom feel hotel and luxe. Take the headboard as far as you can across the room and put the bedside tables in front of it as well as the bed. And it seems only logical to finish where we came in – with a wall-mounted zebra in the home of the interior designer Joa Botelho, who has used the same colour combination but in a very grown-up space which just goes to show you can have fun in any interior. And so you should. Maybe that’s this week’s red thread – a wow factor in every room.

Five of the Best: Rattan Chairs

Decorating on a Budget and How to Plan Kids’ Rooms: Podcast Notes