Colour forecasting is big business and it’s an inexact science. While paint companies and trend spotters will try and predict the next big colour they don’t always get it right as it’s impossible to know how consumers will react. They can try and predict a mood – green being the prevailing one at the moment – but they often won’t know which particular shade of the basic colour will tap into the zeitgeist. However, if you pay attention to shop designs and, in London particularly, the background colour for advertising billboards you may have noticed that millennial pink is no longer the colour of choice. Yes it’s still on our clothes and our cushions but have a look around you. The new background colour is called neo-mint and it’s everywhere.

This was highlighted by WGSN, a trend forecasting company used by designers across several industries, when they announced back in March that neo-mint would be the colour of 2020. I first saw it at Maison et Object in Paris last January and, I don’t mind admitting, didn’t like it much. 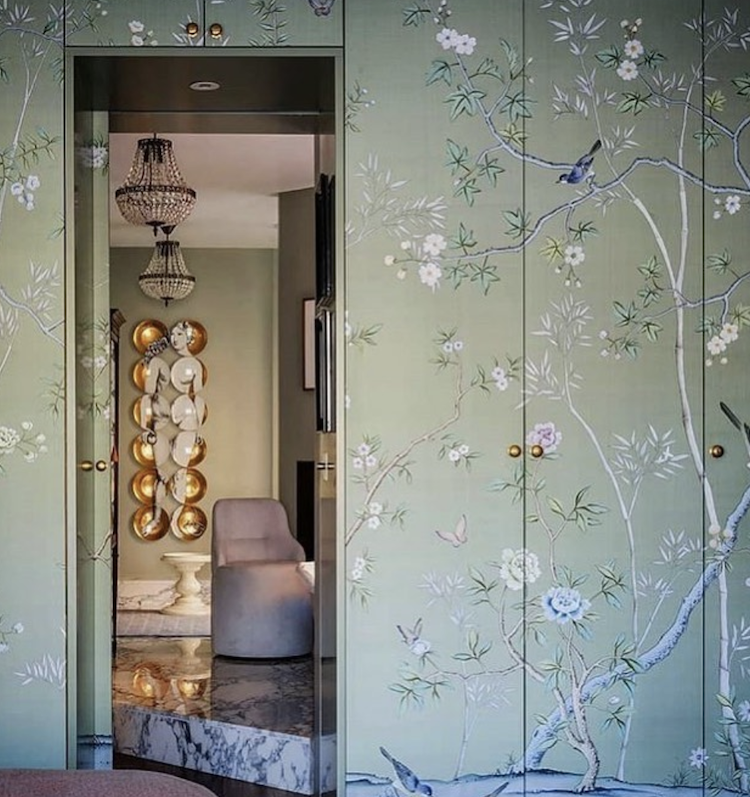 wallpapered wardrobes by frank and faber

But that’s the thing with these colours. They tend to creep up on you so before you know where you are you start to accept them because you see them so often. As I say, firstly on instagram pictures of trade shows, then in shop decor and as background colours. All this time you aren’t really noticing it as it’s a background thing. But by the time the manufacturers are creating sofas and cushions and clothes, you’re already unconsciously familiar with it and ready to accept it. As well as being gender neutral as a colour, it’s also a shade that is regarded as a fusion between science and nature which is also reckoned to be an important relationship as we start the new decade. The other thing to always bear in mind is that these colours can take up to three years to filter down to the high street so if you are only just starting to spot it now it will be a while before you see it everywhere. Which also gives you plenty of time to get used to it. I have gathered together a few examples of it here so you can see how you might want to use it, or what other colours it goes with so that if you like it you can think about how you might incorporate it into your own home. As you can see from Melanie Lissack’s ikea hack below, it loves a bit of pink and orange. But it’s also interesting to note that when Devol Kitchens opened their New York showroom earlier this year they also chose to incorporate a splash of neo-mint into their traditional navy blue kitchen set up. It also loves brass and chocolate too so although it might seem quite a difficult colour to start with, when you start to think about it it’s surprisingly easy to incorporate. And I love this subtle use in the kitchen of Emma Worthington of,  @moveovermagnolia who has used it to paint the RSJ holding up part of the kitchen and tied it in with the radiator as well. In a previous collaboration with Bisque radiators I said that if you have a radiator that is a feature why not paint it to stand out rather than blending in?

One other point to note is that everyone said that blush pink would morph into terracotta and while there is lots of terracotta around it hasn’t become the background shade in the way that neo mint has whereas this unusual shade of green appears to have arrived out of nowhere and taken over. Have you noticed the gradual emergence of neo-mint? I bet you do if you start looking for it now. And, given that you’ve got a couple of years until it saturates the high street what do you think? 10 Things You Need To Know About… English Country Style