The Househunter: A two bedroom apartment

Well that was controversial last week wasn’t it? I was expecting the comments about the darkness (it was dark) but I wasn’t expecting such dislike of open plan living (although I completely get that) and ultimately I thought it was interesting to see such a completely unexpected interiors to a somewhat classic Victorian terrace. That said it’s great when everyone takes the time to engage and comment so thank you all so much for that. I suspect this week’s properly will be much less polarising. It’s a two bedroom apartment in a fancy, schmancy part of of North West London so the price has gone shooting up from last week, while the space has been dramatically reduced. It’s on with The Modern House for £1,100,000 but there are some ideas you might find useful for your own places and spaces all the same.

So there is essentially one big living room with lots of space for the table and the kitchen looks like it has been tucked into the original side return which is a clever idea – rather than sticking it all along the back and meaning the the living space is removed from the outside. The paint cuts the space in half visually and the rug under the dining table provides another separation between living and dining. Note, if you are putting a rug under a table that the chairs must sit on it full when pulled out -as these mostly seem to be. The glass table almost disappears – you have to look closely to see it’s there at all – and the chair legs are as sleek as they can be.

Imagine how much more cluttered this space would feel with a wooden table with four legs as well as six chairs with four legs as well. You can see why the Finnish architect Eero Saarinen came up with the Tulip table in response to this: “The undercarriage of chairs and tables in a typical interior makes an ugly, confusing, unrestful world. I wanted to clear up the slum of leg.” You can also see how the owners have used plants to break up the space and how the seating area, while it doesn’t have a sofa with its back to the dining room, is very firmly angled away with the focus towards the middle of that relaxing area.

The colour palette is minimal as there is a lot to fit into this space so the doors and furniture are all in natural shades of wood and leather while the dark walls help to zone it. Somehow the lines on the louvred doors, the radiator and even the palm leaves all seem to tie together but that’s probably a step too far. Now come into the kitchen. It’s a narrow galley kitchen but, as I said higher up, it seems to have been built into the side return leaving a large square living space where each part (living, dining, cooking) has a garden view. Running the sitting room all along the back with large bifold doors (we had one of those recently) doesn’t really give you more usable space (just more empty space) and means the kitchen and dining are probably fairly dark as they are push towards the middle of the building. Always examine a floor plan and see if there is a better way to use the space that isn’t necessarily the traditional way. We’ll see another example of this in a minute. Now into the bedrooms and this is where you should look at the floorplan. It was an arrangement like this that gave me the idea for my walk- through wardrobe behind the false wall. I stayed in a house in New York where a space between two bedrooms had been divided to create a bathroom and behind that a dressing room, only in that house it could be accessed from both sides and was shared between two children as a mix of toy and clothes storage.

It’s a really clever idea and you can just see above how the dressing room is accessed via that sliding door that has been painted to match the wall. And yes I would either have painted a white skirting board on that door to continue the illusion or painted them to match the wall. And I’m including this picture as I just think it’s pretty. For me this milk chocolate shade is a really restful bedroom colour but I imagine it won’t work for all of you. If you do like then try Attic by Little Greene, which reminds me a while ago I showed a room in a sort of tan shade and lots of you liked it and we couldn’t find a match but I have just found Middle Buff so have a look at that. Fenwick and Tilbrook have Bear Cub and Earthborn have Muddy Boots and Rocky Horse.

Finally, a small but pretty bathroom. The picture brings in the colours from the bedroom, the white metro tiles and ceiling offset the dark walls and painted bath, while the penny floor tiles bring pattern. I imagine that’s a faux plant as this is a windowless bathroom but never let it be said again that you can’t bring style and character to a small windowless space. And the garden. Because we will have warm days again and, who knows, next time we get to sit outside under a blue sky some of us, many of us if we are talking warm blue skies and not winter blue skies, may have had the vaccine and be sitting outside by choice with friends and family. Remember, no matter what happens the sun will rise again in the morning. 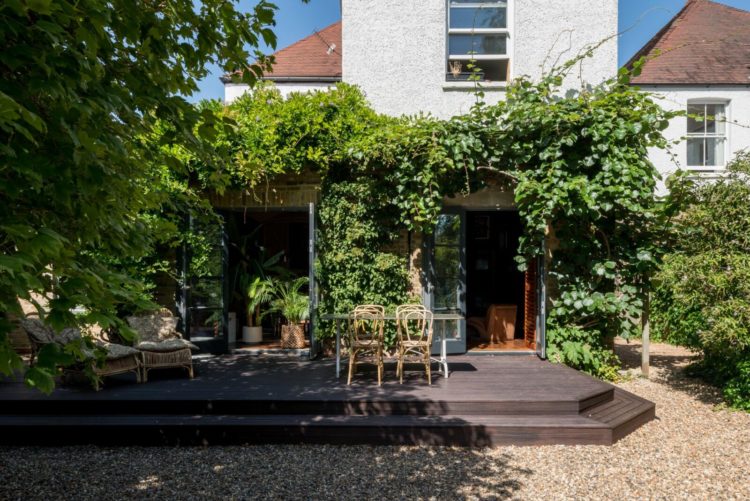 And on that note I leave you for the weekend.