It would be fair to say that I see a lot of new products and while I’m always interested and keen to see what’s out there, when I received the press release about The Sculpture House, I was slightly stopped in my tracks and felt they deserved a whole post of their own. The Sculpture House launched its debut collection of artist-designed furniture this month (March 2013). It was founded by Alex Chinneck, David Murphy and Richard Davies and aims to bridge the disciplines of ﬁne art and contemporary design by collaborating with an ever-growing, but carefully selected group of young and international artists. 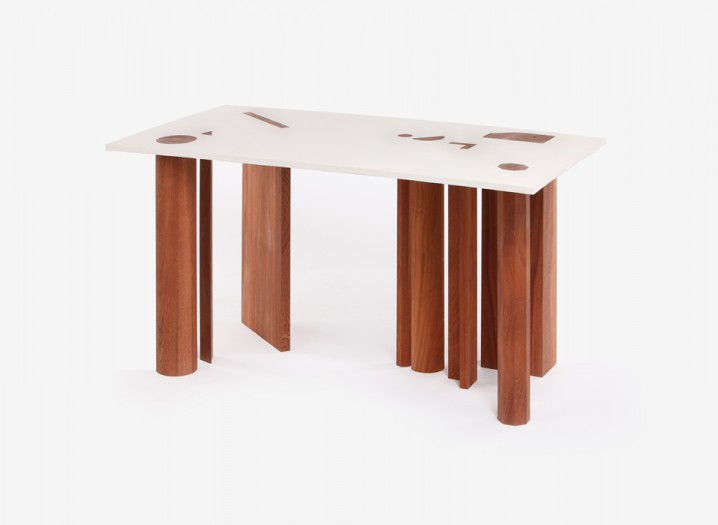 The Object Desk by Kit Craig: the shapes from the legs below remind us of everyday objects found on a desk

Motivated by a belief that artists bring alternative attributes to a design process, The Sculpture House was originally conceived as an opportunity for artists to explore furniture design freely anad what began with a single exhibition in East London during the summer of 2011 has now widened to involve an International community of artists. The rubber shelves by Luke Hart

While The Sculpture House currently works in close collaboration with 20 artists from Europe, Asia and the U.S, the directors are are still scouring art schools for new talent and approaching more established names directly to take the initiative forward. The Concrete Rug by Alex Chinneck

Speaking of his design, Chinneck says: “By cutting and arranging 238 pieces of concrete paving slab to mimic a decorative rug, I wanted to juxtapose and elevate this everyday construction material with associations of baroque.” The Antipode Chair by David Rickard

Look closely at this chair and you can see why it is named thus. Rickard says of his creation: “It’s a chair for both sides of the world within one place. An object that relates to its current position and also that of the relative antipode some 12,750 km directly below. The skirting board sunset by Helm Smits

The dimmable LED bulbs in this light bring a warm glow reminiscent of the setting sun and create a little ambience at the same time.

Which are your favourite pieces? For more details and prices visit The Sculpture House

Objects of Design #21: Sycamore Cheese Board