So here it is: No 2 Son’s bedroom reveal. Two weeks ago it looked like this (that’s without a roof for those of you who can’t be bothered to click the link). It’s a small L-shaped room belonging to, possibly, the messiest person I have ever met.

We have tried all sorts of storage solutions over the years – wardrobes, shelves, hangers, drawers. None of it works. It all ends up on the floor. The most progress we ever made was the time he spent 20 minutes hanging everything on the handles of the chest of drawers.

Faced with a small room, a large mess and a restricted budget (we hadn’t planned on doing this room but the ceiling had to come down and the walls needed insulating so we had no choice), I came up with the following plan. 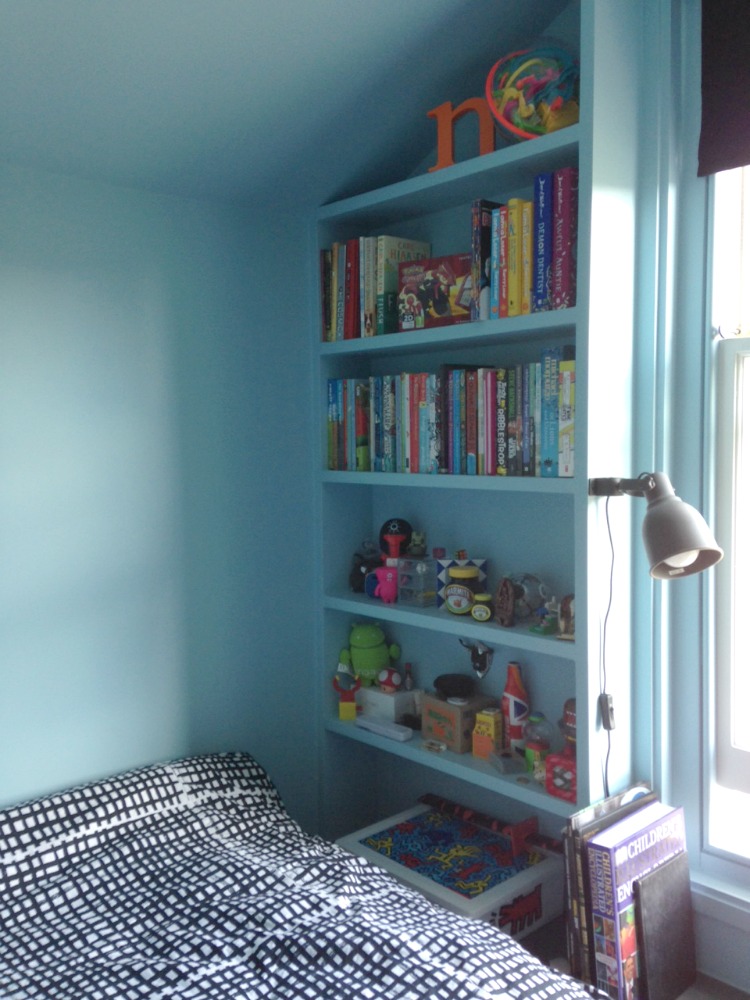 The bed and desk would be built as one continuous platform in an L-shape around the room. This makes the bed high enough to store things underneath while the desk was kept to 40cm wide. This is big enough for a lap top,  in a larger room I might have gone wider but this works because it’s long so it doesn’t need quite as much depth. There are also a couple of small holes drilled at the back to pass cables through from underneath. If your child is younger you could add a rail to make it safer for them.

The space at the bottom of the bed was used for shelves. Or as he decided on moving in: “my display units”. The rest of the books are under the bed. Where *sighs* they will probably remain. Ah yes, under the bed. The solution was to buy three white boxes on wheels from Ikea (the wheels make them easier to move on carpet – we have used the normal boxes – trust me you need wheels) into which will go pyjamas and pants, weekend trousers, tops and in a fourth, blue, the dirty laundry. In theory – and we are only two days in – the boxes are pulled out, the clothes thrown in or taken out with ease and hey presto. He’s 11, he doesn’t need his clothes ironing. By the way, you can buy lids for these boxes. Obviously that will look better but I know from bitter experience that that will complicate the procedure so I didn’t bother. It has to be that simple.

The school uniform (the bit that needs to be more presentable) will hang on a rail of shaker pegs on the wall above the cushions in the picture below. It hasn’t arrived yet but when it comes it will have seven pegs and will hold five white shirts, one pair of black trousers and a blazer. He will then also stop asking me when it’s the weekend because he can count the shirts. I am a multi-tasking design genius! Also, when he is older and does want to wear more shirts or ironed clothes, he can put hangers on the pegs. I imagine these will be mostly empty hangers for decorative purposes and the clothes will still be in the hoppers but he has that option. Now you’ll have to excuse the builder’s lead coming through the window on this one. It’s going to be there for about a month so I had to work round it. The pegs will go on the right hand wall as you look at this picture.

And that’s about it. The lights are all Hektars from Ikea. I bought three metres of steel grey fabric cable from Dowsing and Reynolds for the pendant. It’s incredibly good value at £3.79 a metre only I did a last minute order and had to pay £11 for UPS next day delivery which basically doubled the cost but if you are more organised than me it’s very good value. The walls are Blue Sky by Little Greene. I would have chosen a slightly paler version myself (I love Gentle Sky) but he was adamant he wanted blue and he wanted THAT blue. Given that this is a boy who would refuse chocolate cake rather than eat one single pea, there was no point fighting that one. And actually, these photos don’t really do it justice, it is a gorgeous colour. The desk is Down Pipe (it’s all over the house and we had some left over) which he also wanted. Handily, as so did I. And the carpet is also dark grey.

The carpet fitter was completely terrified of Enid Cat, who matches the carpet and is therefore camouflaged, and kept shouting that she was creeping up on him. In fact, in that way cats have of knowing who dislikes them, she sat on the stairs just outside the room and stared at him without blinking for the entire two hours he was here.

I may have to find someone else to do the stairs up to the loft. Anyway, there you have it. Do you like it? I’d love to hear your thoughts.