Walls. We’ve all got ’em. We all spend quite a lot of time thinking about what colour to make them and quite  a lot of money procuring the paint to do it with. Now it would be wrong to say today’s post is about a new kid on the block but it is, for some reason, a kid (if we’re going with that analogy) that ought to be better known in the school of paint.

This is the kid that was a bit shy when everyone else was jostling for mates and he and didn’t push himself forward. The kid that everyone basically ignored for ages until one day someone struck up a conversation with him and realised that he was actually really cool and worth getting to know. Right that’s run its course -the kid is Fired Earth and I can’t be the only person wondering why their paint isn’t better known. It’s a bit of a trade secret, which is, as ever, great if you’re in the know, but it deserves to be more known by more people. While its names may not pass into the vernacular, the quality of the range is second to none and there are some gorgeous shades to chose from.

Pictured here are some of the colours from their grey range. You probably need to be testing Top Hat and Antimony straight away. But I’m also a fan of Mercury and Modernist White. Some of you will have already chosen your greys and be ready to move on. Some of you, judging by my mail bag, will still be pondering if you want to go dark or light. I have done both and love both. In short, a dark colour is great in a dark room where you can embrace its natural features and create something dramatic and cosy. A pale shade is good  in a room with lots of tricky corners and angles as it will look different across all the surfaces and reflect back on itself creating new shades as the light changes during the day.

If you are considering the latter then go for the ceilings, skirtings and doors as well. This will blur the edges of the space and make it feel larger and more contemporary. It will also create the perfect backdrop for anything you want to put against it. Grey loves navy, green, pink, red and orange. In fact, grey is everyone’s friend. 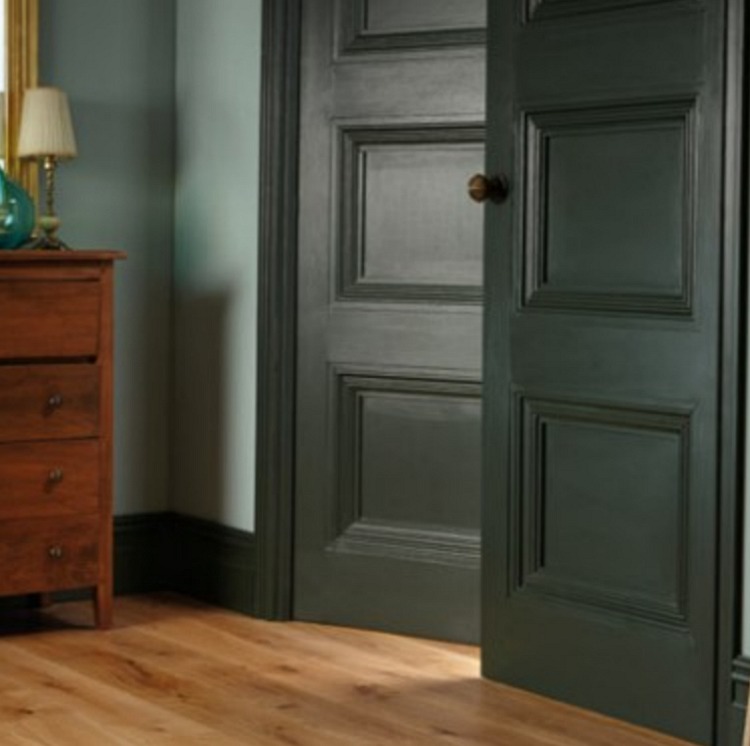 Grey has been pretty much universally accepted as the neutral for the 21st century (Magnolia was laid to rest in around 1999) and the question is not so much – shall I go grey as which grey shall I go? I have, ahem, written a book on that very subject if anyone still isn’t sure….

However, now that we know grey is good,  what about looking at the other colours? The next fashion that is currently spreading over the pages of the glossies is for the dark colours to be the neutrals of choice. I don’t think they will ever replace grey in all its 500 variants – that is apparently how many shades are visible to the naked eye – but I do think that we are becoming bolder in our choices and considering navy blue and dark green for our walls is not as outrageous as it might have appeared a few years ago. There is a tendency, when times are uncertain (and I think we can all agree on that point)  for us to retreat into our homes and to turn them into cosy and safe nests. The old mantra of Don’t Move Improve comes back to the fore and we decorate – not with a view to selling – but with a view to making our homes comfortable fortresses against the outside world.

These strong colours are perfect for that and while I wouldn’t advocate painting your whole house dark – although that works for some – there’s usually one room where it’s the perfect solution. A dark cosy bedroom for example. Or a sitting room that you only use in the evening. That’s the perfect candidate. For those of you who have dining rooms, they also lend themselves to dark and dramatic paint colours. Decorating for yourself and not for potential buyers is immensely freeing because you don’t have to be sensible you can do what you want because it is your home and you live there.

The Fired Earth range consists of around 120 paints which are all designed to have a flat (contemporary) finish and 98 per cent of them fall within the low VOC range. Within that range there are 15 colours that are officially classified as dark neutrals. I’m going to suggest you look at Carbon and Malachite as possible dark blues and greens. Fired Earth has a large range of grey paints

But you may also want to consider the rich plum shade of Carragheen, which is one of the jewel shades currently fashionable in furniture – especially in velvet.

And don’t forget the other, very modern trick is to paint the wall halfway up. Now, in a Victorian house with a dado rail this is the traditional approach. If you don’t have that rail then just picking a point and stopping there with a contrasting colour above looks very modern  and cool.

It’s also practical. My suggestion would be to pick a point just above where the bikes, dirty fingers and bags are constantly scuffing along the wall and go slightly higher. Then the dirty marks don’t show and the space looks more considered, which is a designery way of saying that you thought about what you were doing and didn’t just slap a bit of paint on and go to the pub. Which you might well have done but that’s another story. Go and check out the colour range and let me know what you think. It’s all here at Fired Earth.

Is this the Perfect Living Room?