The Great Interior Design Challenge is Back

Happy New Year and all that. And we’re starting off with a bang – well an exclusive anyway – as The Mad House was the only blog to have interview time with the presenters of The Great Interior Design Challenge which returns to our screens tonight. Yes TONIGHT. I am so hot off the press with this I have nearly burnt myself. So to find out what it’s like now there is a new team in place – read on… As I said, it’s all change. This time the team have people. Last time I wandered in and chatted to Dan and Tom while we waited for Sophie, who, we were pretty sure, had got distracted by the large branch of TK Maxx on the corner and arrived 15 minutes late. This time, they are all running late. Except me. I am early. I am always early. This is because when you arrive early you can find stuff out. Except this time I didn’t.

“Tell me the gossip about Kelly, I whispered to the assistant on the door.

“Tell me the gossip about Kelly,” I wheedled to the producer on the sofa.

Tom Dyckhoff came out and patted me on the arm on his way to the loo, “Tell me the goss….” I thought better of it. Eventually I was called in. By a PR person. There were two more PR people in the room. Everybody had PR people. Except Tom. Tom had a chair with a jacket on it. Perhaps Tom would like a PR person. Maybe next year.

So we sat there, the PRs, the presenters and, er me. You’ve got 20 minutes said one of the PR people* sternly. “Now hang on a goddamn minute,” I said –  in my head because I am not that brave. “Ooh that’ll be fine,” I squeaked, mainly because I was sitting next to Kelly. And her hair. My hair had gone straight ever since 7am when I told it to look lively for Kelly. Anyway, enough about my hair. Because I can tell you when Kelly’s there no-one else’s hair gets a look-in. This I thought will be a soft start. An easy question to lure them in and then they will tell me all the really juicy stuff that interviewers are supposed to get. The stuff that they don’t want to tell you and that has PR people hissing into their lapels and clearing their throats and ushering you out of the room.

Only it turns out they don’t know anything about the houses. Because they have people to find the houses for them.

And then it turns out that Kelly has never been to houses like these. “It’s like Melrose Place,” she exclaimed. “A cul de sac,” she rolls the phrase around her mouth as if she has never said it before. And it’s quite possible that she never has. After all, when your clients include the Beckhams you probably aren’t spending a lot of time hanging out in cul de sacs.

“I thought life would be so much nicer if everyone knew everyone on their street and got on well,” she said.

“You wanna come to Crouch End luv,” I said, because I am real like that. Kelly’s hair sort of shimmered in response. Or perhaps it shuddered. 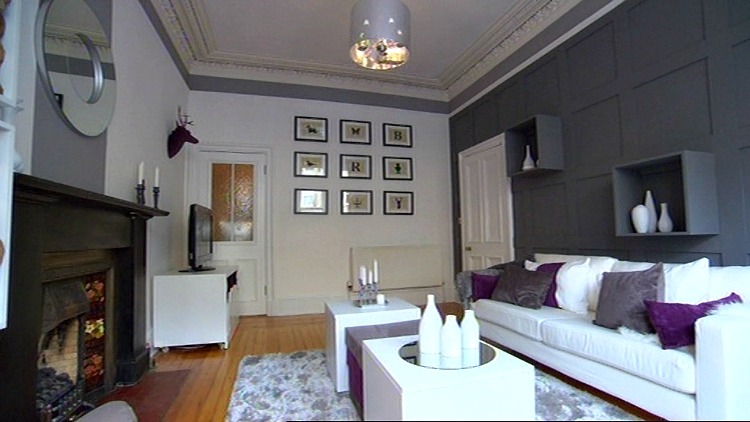 But the show, the show. Well relax, it’s going to be fine. Kelly is proper thrilled to be the new presenter and I think Dan and Tom are pretty thrilled to have her too.

“I am nosy. Very nosy. I love to see what people do in their homes and what they can do on a budget,” she says.

She will admit to finding their budgets shockingly small. And then there was the small matter of the upcycling. Regular viewers will remember that the upcycling challenge forms a significant part of the show. Contestants are given a random item such as an old tennis racket or half a stool and told to create something. This was always Sophie Robinson’s best bit. Dan never looked quite comfortable with it. Jordan Cluroe, was the runner up of the first series and went on to form the successful Two Lovely Gays design partnership with his husband Russel Whitehead, photo by Holly Jolliffe and Heather Hobhouse courtesy of the BBC

So has that part of the show been dumped now that Kelly is on board?

“Not at all. It’s still a huge part. I did have to ask what they were intending to do with the coat hanger. And then I had to rush into another room to ask someone what upcycling was but I love to see the creativity,” she said. You see, she’s lovely.

And it’s still the same show. It’s a bit faster, there are two reveals – one of which involves doing a room in 24 hours – the thought of which makes Dan feel a bit faint – and there are, of course two professional interior designers now. There is also, in the manner of all reality shows these days – a wild card where a reject from an earlier show is brought back.

“It’s the same show but it’s a polished gem,” says Dan. “It’s about the people and finding talent and nurturing and encouraging that talent.” So has it changed them as designers? Dan admits to a slight loosening up of ideas. “After a while as a designer you can get uptight. This show has reminded me that there are other ways of approaching things.

“There are some incredibly genius things on the show, particularly towards the end,” he says, teasingly.

But the big question that I heard from everyone before I met her is how is Kelly Hoppen, MBE, The Queen of Taupe going to cope with all the colour so beloved of previous series. Has she changed her approach? There is a slight rustling from the PRs.

“I am what I am,” says Kelly. “I’ve been doing this for 40 years and in my  book (House of Hoppen: A Retrospective) there are 17 only pages devoted to colour accents and that’s in a forty year career. But I can appreciate other people’s design. I was able to judge what I saw. I was a very neutral judge.” “I needed medication,” says Kelly as those curls fell just a tiny bit.

Unfortunately I can’t tell you more about the peach (mainly because they wouldn’t tell me but it’s in the first episode so we haven’t got long to wait).

Now that I have them captive I thought I would get a steer on new trends. They are all agreed that velvet and opulence are coming back. The clean lines of modernism are becoming slightly softer round the edges.

It takes Tom to bring the intellectual element back. “Of course Art Deco began during the economic hardships of the 1920s, “ he points out.

There is gloomy silence before everyone agrees that they would like a tour of the Trump Tower. Kelly is convinced he won’t be allowed to decorate The White House. Talking of which, do the decorators ever get called in when the contestants have left. “There is snagging,” says Tom tactfully.

“Of various degrees, “ he adds.

“That’s a good word,” says Dan cheerfully – as if it is a word he hasn’t come across before. But he’s a professional interior designer. Perhaps he hasn’t. “The point is it’s about the clients. Nothing is left shoddy.”

So where were the disasters this year. “Cheltenham,” says Dan. “Bristol,” says Kelly. “Aberaeron,” says Tom.

And then there’s the peach.

Safe to say it’s going to be a good series. And it’s on at 8pm – primetime. Oh, and did I mention Kelly? Kelly’s lovely.

*The PR people were actually lovely by the way and only there to make sure that the presenters don’t give away all the secrets in their enthusiasm to talk about the show.

There are nine episodes in all and the series will run for three weeks on Tuesdays, Wednesday and Thursdays at 8pm on BBC2.

Planning to buy a Sofa? Read this.