Some of you will remember the apartment I helped work on in The Hoover Building a couple of months ago… well today I wanted to show you the last room that I didn’t share before. That’s the bathroom. I didn’t show you because a) I had nothing to do with it and b) bathrooms – especially small ones – are incredibly difficult to photograph so I wanted to wait until the professionals ( in this case Paul Craig) had been in and worked his magic. So this is the view from the bedroom. I visited the flat before Lucy started decorating and while the bathroom was fine it wasn’t her style at all. It’s a fairly small windowless room and the brown tiles make it even darker. It was slightly at odds with the rest of the apartment.

But there were practical issues too. Lucy is tall and the original shower over the bath raised the whole thing too high and meant she couldn’t stand up in the shower. The basin unit was dark wood as well which together with the brown tiles made the room darker than it needed to be. 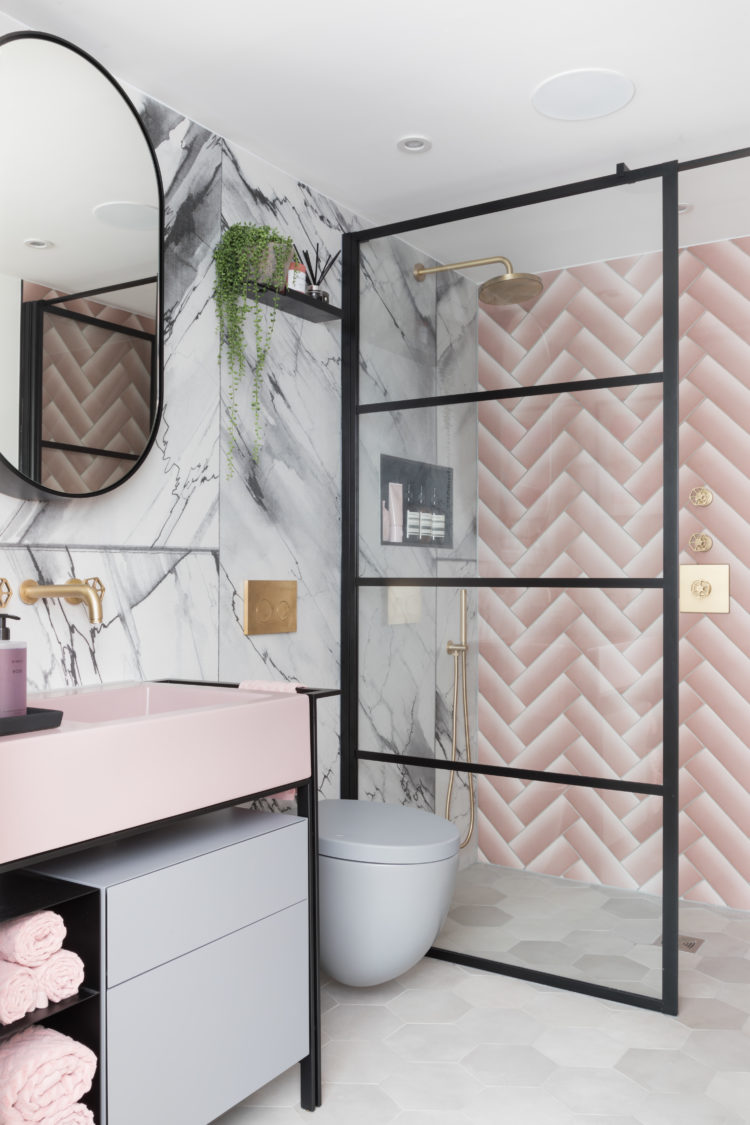 There was also a large mirror (with nice fan detailing on the edges) but as Lucy said: “While the style of the mirror was in keeping with the rest of the building I did not need to see my naked body at such close quarters during a shower.”

Here you are if you want a look: In addition to that the floor showed every drip and watermark and there was no storage. In short, there was nothing right with it. So she turned to West One Bathrooms on my advice as I had been writing about them on these pages and I knew they had just launched a full design and build service. This costs around £450 but is redeemable against any purchases you make for the room. Lucy’s brief, it won’t entirely surprise you to learn, was feminine and statement. But not too girly (hence the black). There needed to be a reference to the Art Deco period of the building, which was done with the herringbone tile pattern. And there had to be lots of storage as Lucy is a self-confessed “product fiend”.

“I did have to persuade them to let me have a shower recess as they said it was old fashioned but I hate having lots of product sitting on the floor and I’m so glad I talked them into it and it’s really handy. The oval mirror over the pink basin is also a shallow cabinet (remember in a bathroom you can get away with a cupboard that is only one bottle width deep so you don’t have to worry about losing lots of space).

There are also drawers under the basin which hide even more stuff. Louise Ashdown, designer at West One, created the original design and Lucy tweaked a few details such as the mirror cabinet, in which she added a shaver socket so that her toothbrush can charge out of sight. She also added the drawers to the vanity unit and suggested the crittal style shower doors go all the way across instead of half way as she thought that would have more of an impact. It’s less private but it is more dramatic. Louise said: “Lucy’s initial thoughts were that she loved matt black, brass and wanted a bit of pink – but had thought these would be applied to wall coverings and taps only.

“With the Hoover building being such an iconic building, I wanted to show hints at a bygone era in a contemporary way – you can’t just use standard products in here – so I encouraged her to push her boundaries a bit and suggested the stunning Cielo Mini Narciso basin in CIPRIA ( Pink) with BRINA ( GREY) storage drawers on a matt black industrial stand. “This  also nods to the former factory use of the building, but incorporates some deco colours and fun too. I placed the Cielo Brina WC next to the basin to blend with the unit and tie them together for a more cohesive look… additional storage of the lozenge style cabinet above the basin with black task light on wall.

“Ripping out the bath with shower over opened up the floor space plus made best use for showering and created a stunning feature as you enter meaning the whole back wall would be the walk in shower with a deco crittal effect pattern.

“For the brassware we used our own brand, West One Bathroom Industrial feel 5th Avenue taps in Brushed Brass with our new GEO handles. The shape of the handles is also reflected in the subtle grey shades of the hexagonal floor tiles – again to tie with the grey loo and unit. Underfloor heating under the floor tiles creates warmth from floor up plus keeps the internal bathroom fresh and dry, which is especially important with a walk-in shower.

The impact wall opposite door has the stunning Diesel Shades of Blinds tiles in a clever herringbone pattern which accentuates to shading on the tiles and the side wall for the basin, loo and part of the shower has the stunning abstract glamour of the Olimpo marble effect Waterproof wallpaper.

There is a lot going on within such a small space but the colour pallet moves and blends beautifully, creating a fun and practical space for showering more befitting of the building it’s in.”

So, whaddyafink? I have seen it in real life and it is a gorgeous job. I have

This was not a sponsored post but I have worked with West One before as you know and I agreed to write about this bathroom transformation for them.

Do Less Harm; Join My Campaign