Happy Monday to you all and happy July. We may not be completely in the swing of summer weather yet (at the time of writing it’s only just begun) but with both boys starting their longest holidays – post A level and GCSE – things have certainly moved down a gear at The Mad House. Today’s post comes from the El Fenn hotel in Marrakech, where I have been invited on a press trip to see this design-led hotel in the heart of the Medina that was furnished from local flea markets, renovated using local craftsmen and traditional techniques and many of the original tiles were restored. I will be sharing more on instagram as well as writing about the design in more detail later in the year, but in the meantime those green tiles…. I mean the boys’ shower room does need doing. And green is a good colour for a bathroom…. style north is part of the interior design collective

Staying with green and we come to the newest recruit to the Interior Design Collective, which I have written about before. Style North work out of Cheshire and South Manchester. Their ethos is practical with a wow factor on a budget and they offer a series of packages from “not enough time” to “no idea” to help you work out what help you need from them. 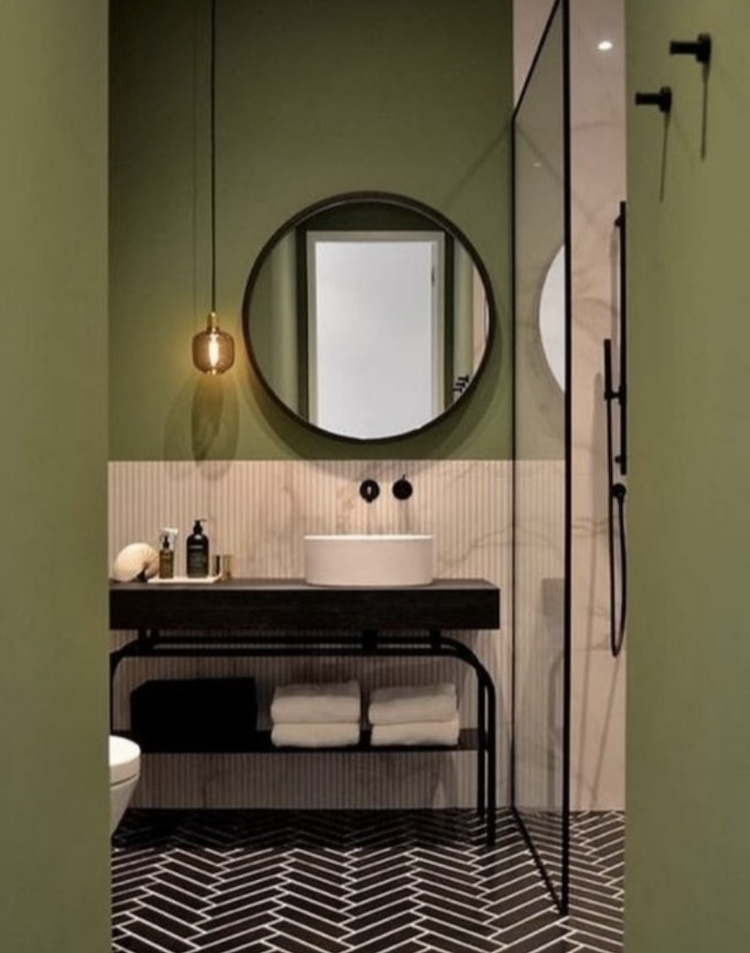 pink and green bathroom by Marion Reynolds of Pastiche Style

Green and pink now and a while back I showed you a bathroom by Sarah Akwisombe that was mint and pink (see below) and here, in a similar sort of space, the designer Marion Reynolds has created a version in olive and blush. Both have herringbone tiles, both have black accents to define the space and both have round mirrors and round basins. I’m instinctively drawn to the muddier end of the colour spectrum but I love both of these. Green kitchens have been around for a while and I think it will continue to be a strong colour for years to come. Partly because we don’t change our kitchens that often but also, as I wrote about in my post on biophilic design last week, because green connects us to nature and the outside, something that is sorely lacking in most of our lives. The exposed bricks, which are pinkish in tone, create another, more natural version of the pink and green colour combination that everyone loves at the moment and the natural leather and sheepskins have created an almost textbook version of this school of thought. Another look that is popular at the moment is tongue and groove panelling. It’s not expensive and it can hide a multitude of sins – bad plaster, bumpy walls, woodchip wallpaper etc. Also, if you have been nervous about the half-painted wall it gives you a reason to stop and change colour. And, if you take it three quarters of the way up, as House Seven Design has done here you can fix your walllights to it, run the wires down the back and stick the panelling over the top – no need to chase out plaster and make good afterwards. Here is a detail of the room where she has created a work corner. It’s also a brilliant way to add character to a new build where the more traditional panelling would look out of place. IF I was in the business of redoing teen bedrooms, which I am emphatically not, this is the first look I would be considering. Here, Laura Higham, of The Indigo House, has done a similar thing to create an office zone in a bigger room. This would also work in a teen or student bedroom, as you could use the wood as a kind of notice board or put a row of shaker pegs along the top to hang a notice board or other useful things from.

And to finish on a theme, note how the circular rug provides a contrast to all the straight lines and rectangles that you tend to find in an office space. It does the same job as the round mirrors in the bathrooms above, and the oval one in the green kitchen. So there we have it. I hope you have enjoyed Monday’s stroll through 10 beautiful rooms and found some inspiration for your own places and spaces.

Black and White Rug made from Recycled Plastic Bottles