Some really clever ideas in this week’s mix of beautiful spaces, several of which include a touch of vintage – which, as you know, I think is always a good idea. In fact, it’s never a bad idea. Some restful colours, clever ideas and all created by people who I think are worth following for some real inspiration. Come with me and see. 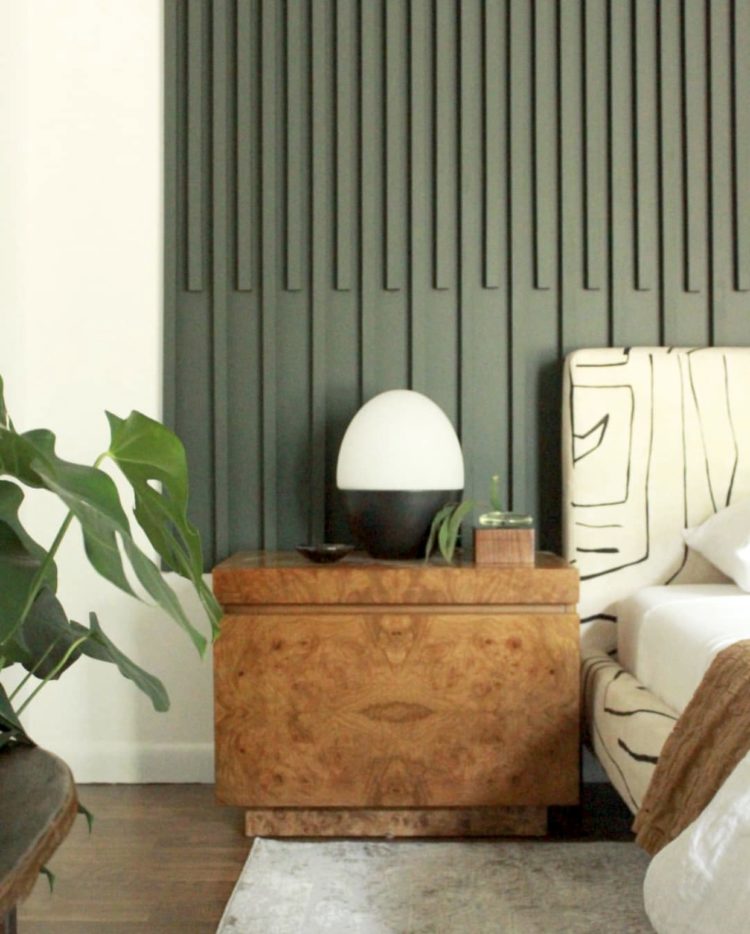 And because it’s Monday morning (apparently… who really even can be sure any more?) we’ll start with the bedroom. Some of you might even be reading this in bed because I do know that in our house, with two nocturnal teenagers, we are all going to bed later than we were before the lockdown. Even the cat is exhausted as she stays up late to keep the boys company for their late night film session and then sleeps all day.

But enough of my late nights, just look at this panelling. This is so clever. I have shied away from panelling in my own house as I worry than sticking Georgian panelling into a Victorian house isn’t quite right and then I haven’t been sure about the entirely modern versions I have seen either. But this, this I love. Entirely modern and yet creating a glorious pattern above the bed. You could recreate this with simple wooden batons cut to different lengths. And if we are all going to have to work from home more in the future then the office chair business is going to have to up its game somewhat. This gorgeous vintage piece will do for me and I love how it is echoed in the gilded Florence Broadhurst paper. It might be a dressing table area rather than a workspace but that said, most of us are going to need more multi-tasking spaces, so a stack of drawers which can be used for both office files and nail files might be the decor of the future. vintage rug in the home of darryl carter

Out of the bedroom and along the corridor to the bathrooms. But what a corridor. Again, a vintage rug. This is very like the one under my kitchen table which is full of holes and tears but these rugs can take it. And it’s the perfect splash of muted colour in an otherwise monochrome space. Currently I have dark walls and white floors but if ever there was a persuasive argument for swapping them round this might be it. Now we’ll end up with three fabulous bathrooms. First up this bathroom has floor to ceiling wallpaper which you don’t often see in a bathroom – try covering with decorator’s varnish to protect it against splashes. There’s a hint of vintage rug in the corner too which is pretty. But look at that basin unit.

We’re familiar with the idea of buying an old table from ebay and sticking a basin on top but this is a modern version that looks really great. A piece of characterful wood and some trestle legs. For UK and European readers try TipToe. Fr for legs that would do the same thing – they come in lots of colours. Such a simple idea and so effective. Staying with bathrooms, and while regular readers will know I prefer tonal colours to high contrast, I’m not averse to a bit of gentle pattern clashing and this works really well. The tiles go all over the floor, side of the bath and walls with more toning pattern around the edges. You could easily add more colour with different towels and bathmats if you wanted something more colourful. Another way would be to look at coloured taps. Dowsing and Reynolds have just launched a range in pink and mint which would work really well against the black and white, as do the existing black ones. In fact the only thing that wouldn’t work in here would be traditional chrome I feel. Perhaps because it would get lost in the pattern.

Finally, more black and white tiles and coming back to the green from the top with a vintage looking shelf and vanity unit. We’ve come full circle. Although sometimes a straight line leading in a new direction is better. I’m not going to post tomorrow (Tuesday). For the first time in eight years I will miss a slot. I have been pondering an idea around diversity in design and I need a couple of days to work on it and a short space to clear my head and put it out for discussion. I hope you won’t mind, I feel sure you, my lovely supportive readers, will understand. Against the background of the pandemic it has felt wrong to post about things you can buy so over the last three months my posts have been longer, and, I hope, more useful and informative, which takes more brain cells.

So I’m going to take 48 hours to think about this new idea and I will be back on Thursday which the podcast show notes which will include, among other things, an interview with Marianne Shillingford, the creative director of Dulux on how you choose a colour of the year when there’s an unexpected pandemic.

See you then XK Diversity and Interiors: We are Listening – Podcast Notes