By many accounts last week was a tricky one, not just because of events in America which will have touched some of you personally, but also the first week of a new year which was, for many us, spent in another lockdown with dire news reports coming in from every direction. So, as usual, I offer you these rooms as nothing more than a little respite. Come in, pour yourself a cup of coffee and look at these havens of relaxation and see if that helps you to draw a deep breath and drop your shoulders. First up is this heavenly wallpapered landing by Siobhan McFadden. It’s still rare that we see fully wallpapered spaces in real homes and this is a lovely example of a William Morris paper in soft colours that doesn’t dominate the space. Note the woodwork (skirtings and door) in a soft greige colour that tones (rather than a more traditional and contrasting white) and the way the stripped wooden banister and bookcase echo the darker tones in the paper. It’s not often that you would describe a strongly patterned wallpaper as restful but I find this is exactly the case and would be trying to squeeze a little chair up here if there was space beyond this camera angle. I have spoken before about the joy of something unexpected and in this Neptune kitchen it’s that tangerine cooker which just pulls out the faded colours of Persian rug and really adds a dramatic punch to the room. I am reminded of a quote  by Diana Vreeland, a former Vogue editor, who said: “A little bad taste is like a nice splash of paprika. We all need a splash of bad taste – it’s hearty, it’s healthy, it’s physical. I think we could use more of it. No taste is what I’m against.”

Now, of course I’m not saying this orange cooker is bad taste – quite the contrary – but it IS unexpected and some people might find it controversial. Not least because, take a breath here, it’s the thick end of £10,000 which means you could be forgiven for sticking to a safer colour for fear of going off it. On the other hand you might love it for ever and change the kitchen cupboards around it – a much cheaper refresh option – thus changing the look of your kitchen as often as you please/can be bothered to get the paint out. This yellow fireplace does the same thing (for the cost of a single tin of paint). I spoke last week about the joy of painting a window frame yellow and this fireplace by  has the same joyous effect. If you follow Trish on instagram you will see that a splash of yellow is very much her red thread and turns up on a door and also in her artwork through her home which featured on Homemilk recently

Moving to green now – I fell down a bit of a rainbow rabbit hole when I realised we had orange, yellow, green and blue (took the dried flowers from the top as red) although it all fell apart when it came to indigo and violet… 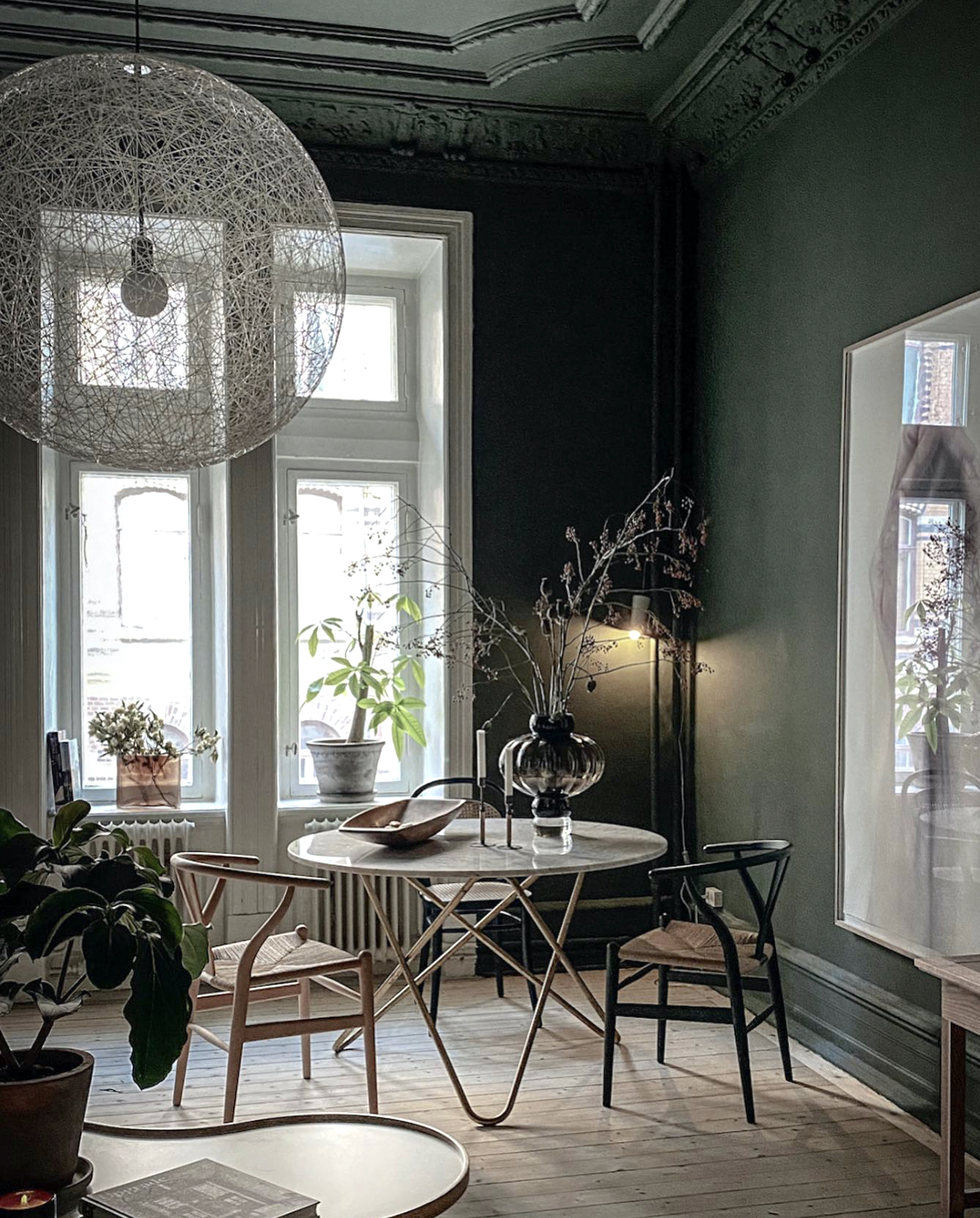 We have seen the other end of this room before – and I apologise to my green-hating reader – skip this and look at the blue bathroom below which I included just for you (!). I know the ceilings are aspirationally high which is why the designer Sofie has been able to take that deep dark green up from the walls and over the ceiling too. However, the thinking behind that is that will will make the ceiling recede and appear even higher. One of those things you can only know if you try in your own space is my guess.

The other great touch in here is that huge light which is a real showstopper but, by virtue of the fact that it’s transparent, it doesn’t block the window or appear heavy. It’s more like a giant bubble floating in the room. And who doesn’t like that as an idea? This is a great example of how you can mix patterns in a room to great effect. If you break down all the elements there’s a lot going on here – chequerboard floor in black and white, high gloss metro tiles, wallpaper, brass accents, those ornate claw feet on the bath… and yet it all works. The colour palette is limited to three shades, one of which matches the bath, there is one metallic colour and even though the eye starts at diamonds, moves to rectangles and finishes with organic shapes in a repeating pattern, it doesn’t come across as hectic. If you wanted to mix patterns and weren’t sure how then take this as a template and use your own colours and designs. And a burst of one other colour for the towel wouldn’t hurt either. By contrast, this two basin bathroom by Beth Dadswell of Imperfect Interiors feels very calming. That’s partly the colours but it’s also the symmetry. Interior stylists will often tell you about the power of three (or five) when it comes to arranging items on a shelf for display but perhaps less well known, is the contrasting power of symmetry which can make you feel relaxed and calm. Now I appreciate we can’t all suddenly rush out and install a second basin but if you are feeling stressy (and who isn’t) see if you can arrange your mantlepiece with matching candlesticks at either end, or pair up a couple of lamps on a sideboard. Basically change your view and see if it helps.

You can let me know what you do as the week goes on and if it makes a difference.

Book Review: The Elements of a Home by Amy Azzarito