Last week a friend emailed to ask for advice about her knock-through sitting room. An idea which had seemed good at the time (two small children, too many small dark rooms) was proving irritating in the new lockdown life of 2020 with two adults and two larger children all at home all at the same time. As was the added issue of winter darkness and falling temperatures (who else is wondering if not spending money on commuting justifies the heating on during the day). She was discovering that the back of the sitting room, once a dining room, now doubling up as an office, was cold, dark and overcrowded. Plus children coming home from school (when they are allowed to go – Covid classroom bubbles permitting) and wanting to watch television in the front part of this double room was proving problematic. At the same time she wasn’t convinced she wanted to put the wall back up between the two spaces, which would make the back room even darker.

And I got to thinking (you know the drill) that this must be an increasingly common problem for those who knock down walls when children are small and then wish ruefully they could go back up again when they get older. But in period properties, small rooms are often dark. So what’s the solution?

I have visited only one (large house) where the solution was to put the wall back up and even there we decided that it should be two thirds wall and one third glass (more accurately five sixths and one) to borrow some light from the large open plan kitchen.diner/dayroom (for want of a better word) at the back. For most people it’s about adding some doors. Pocket doors are great but expensive to install. Folding doors look good but usually mean you have to move furniture in order to fold them in and out, which is a faff and so you don’t and so the space stays permanently open. Or closed.

The best solution is glass as it won’t interrupt the flow of light but will reduce noise and add a measure of privacy. Ideally you want crittal but that costs more than the GDP of a small country, so look for alternatives. There has been a growing movement on instagram for frittal, which involves sticking wooden batons on plain glass doors and painting it all black (see Malmo and Moss and GIDC winner Daniela Tasca York – slide along her highlights to Crittal).

If you have a tall opening then consider installing very tall doors, or adding a fixed glass panel across the top which increases the sense of height and luxury in a space. And for an even easier solution (although I can’t vouch for how draftproof this would be) I found these sliding glass doors on Wayfair which you can attach to a sliding mechanism and the job is done and quite stylishly so. bathroom with vintage vanity chest of drawers by louise roe

The next two images are for bathroom inspiration. So often a white fitted space where you might feel, especially in a typically small UK bathroom, that it’s hard to bring in character. So we come to rule number 1 – vintage will always add personality. Now I appreciate that this gorgeous bathroom belonging to Louise Roe, is hardly small, but this is about the use of an antique chest of drawers as a basin mount. The top drawer holds the basin, the lower two provide storage and the whole thing brings so much more to this room than a modern sleek fitted vanity would do. The latter are also often earbleedingly expensive whereas you can pick up a cheap chest of drawers from eBay, paint it if it’s cheap pine, or pay more for an antique, and save something from landfill at the same time.

Below is a more modern unit that has been painted to bring personality. Clever DIYers will even cut batons to length to create this customised fluted look (a massive incoming trend btw). Again you could buy a cheap base and then splurge on the marble and brass fittings. Although you could also use tiles which is a more affordable option and there are so many pretty ones around. Finally, we’ll end with a splurge of riotous over the top wallpaper. Because it’s Monday and why not. Below is this intense floral design from House of Hackney which has been wrapped around the whole room and mixed with a leopard carpet and curtains. Now, remember from last week in How To Get a Feature Wall Right, if this is too much for you, you could do just the alcoves but make sure the walls are pink. Or you could just to the fifth wall (Don’t Forget the Ceiling). If you don’t have an alcove you could do a large panel on one wall but frame it with architrave to make it look considered and finished and, well, less random.

The point is that while wallpaper is always designed to be wrapped round all four walls we all know that that won’t work for everyone, so rather than deny yourself a bold decor choice, or risk watering it down by pairing it with an apologetic white, think of ways to make it work. wallpaper by house of hackney TULIPA print in Tourmaline

And this is the glorious kitchen of Guira Design, who has since moved, but proves here that adding a colour from the pattern other than white will also make a more glorious space. Of, course there is white in this paper but how much more considered and beautiful does it look with the blue. 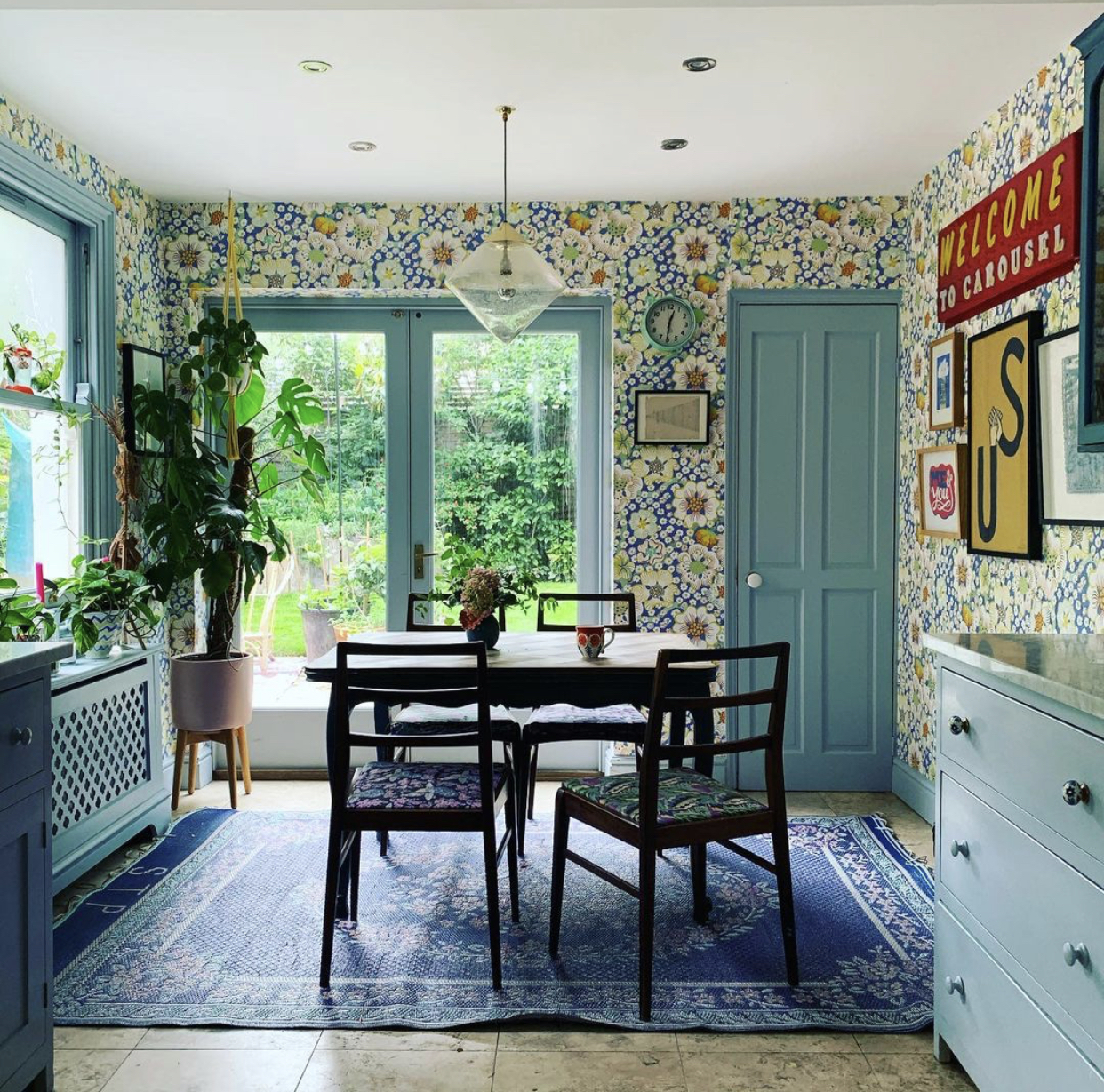 As ever hoping that cheers up your Monday (one more full week of full UK lockdown although who knows what comes after) and gives you some ideas for your own places and spaces. From My Radar To Yours: What’s New in Interiors this month

The Househunter: A Two Bedroom Flat with South-facing Garden