Welcome to the fourth and final part* of my series on How To Get the Lighting Right in partnership with John Cullen. I do hope you have enjoyed it and found it useful. For new subscribers, who might not have seen earlier posts, we have done the kitchen, the sitting room, the bedroom and finally, today, the bathroom. Each room definitely brings its own issues. From how to avoid the grid of spot lights in the kitchen to creating a room with atmosphere that you can still see to read a book in. How to light the bedroom where you need to be able to see to apply that eyeliner but also want to relax with a book before bed. The bathroom also has problems. I expect most of us just have a row/square/rectangle of downlighters that may or may not be on a dimmer switch. If they are you score an extra point and can pass directly to Go collecting your £200 on the way. The rest of you are in bathroom jail until the end of this post.

As you will remember, in order to compile this series, I invited the creative director of John Cullen Lighting, Sally Storey, to come round my house pointing out where I had gone wrong (quite a lot) and what I could do to put things right (quite a lot). The pointing out of what I had got right took significantly less time. So bathrooms. When we did ours, in the far off days before Pinterest, I had cut out a picture of a large freestanding bath with a chandelier over the top and stuck it to my real-life moodboard (I know quaint isn’t it).

“No,” said the builder, when he saw it. “You can’t have that,” and I didn’t get it. I have been standing under a spotlight grid for the last five years and not only that, most of them aren’t even in the right place either. I think, on balance, that it was more about the builder not being sure of the rules and, more to the point, not being bothered to work it out, rather than it not being possible. consider wall lights to make a feature of the tiles

The first thing you need to know when tackling bathroom lighting is that the room is zoned according to the distance between the water and the light fitting. So Zone 0 is basically in the bath and on the floor of the shower. Zone 1 is within the shower enclosure or directly behind the bath. Zone 2 stretches for 600mm either side of the outside of the shower and the ends of the bath. If you want a chandelier over the bath it needs to be 1.5m from the top of the water when the bath is filled, or, in other words, you need a ceiling of around 2.25m high – nearly eight feet. This basically rules out a pendant over the bath for most of us but you might be able to have one in a different zone so that it’s not hanging over the water – the middle of the room for example if the bath is to one side.

But don’t worry, if you can’t have a statement pendant light in the bathroom then consider wall lights. These will reflect onto the water in the bath and create a gorgeous shimmering light that will be really atmospheric. If you have a fireplace, you can light that using some of the techniques from How to Light Your Sitting Room and, of course, wall lights in alcoves.

Waterspring LED £118 John Cullen: use spotlights to wash light gently down the walls highlighting the tiles

Sally suggested their Bari wall lights which are bright enough for make-up and shaving. “You can also light the shower with downlights which will highlight the tiles and create atmosphere.

“If you light the back and the side of the shower you will draw the eye.”

It obviously makes sense to have one light either side to provide an even light which is more flattering.

Many of us with bathrooms in loft conversions will have awkward sloping ceilings to contend with. Sally’s not phased. Instead of putting spots in the ceiling at an angle (guilty) put lights on the wall to wash light gently down or use floor lights to highlight the basin or bath. She is also a big fan of the presence detector which means the light will come on automatically if you get up in the night for a wee and turn off when you have left. This is also good for children who often forget to turn lights off when they leave the room.

Then, when you have sorted out what kind of lights you want and where you want to put them, you need to get the right IP rating. Are we beginning to all understand why most of us just fit spotlights and go to the pub? 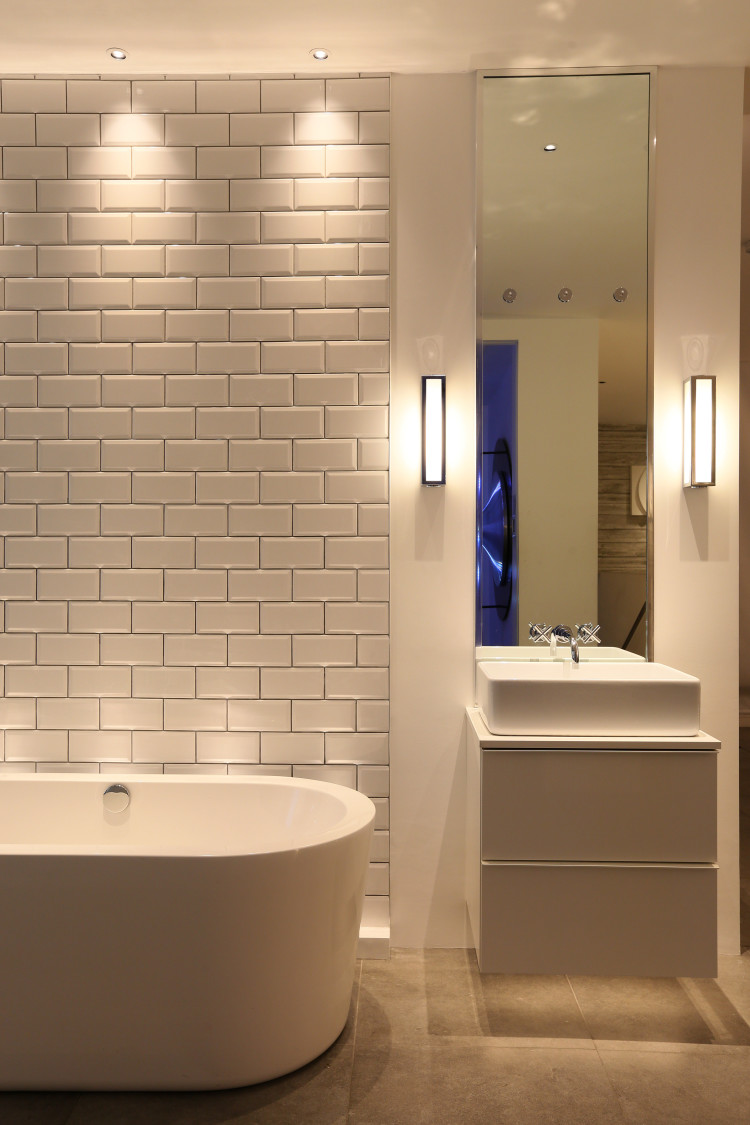 Basically if it’s directly over a bath or shower it needs an IP rating of 44. This is to do with the distance between the water and electricity and the chances of splashing or immersion. This comes under Things To Be Avoided.

Come on stick with it. You can get the builder to deal with the technical stuff, but consider making lighting an integral part of the bathroom so that you can create a bright well-lit space in the morning and something a bit more atmospheric with rippling water patterns shimmering over the walls in the evening. Lighting Rules for the Bathroom

If you have a niche light it with led strips

Use wall lights by the mirror and in alcoves

Consider a statement pendant if you have the height

*And the good news is that this series will continue next month with a piece on Vintage Lighting with help from Skinflint Design.